Once upon a time the Church leader appoints a crusade, the great war campaign against infidels. All Christian rulers will be invited to take part in the war. Crusades differ from other conflicts, that they're connected to big profits: mainly, but not only, in piety points. Every ruler who declare the war at the Church's enemy gains additional bonuses. Besides money gift from the pope or patriarch you gain also prestige. Almost every battle with infidels, getting to the crusade's place , siege gives piety points, prestige and sometimes also moneys. 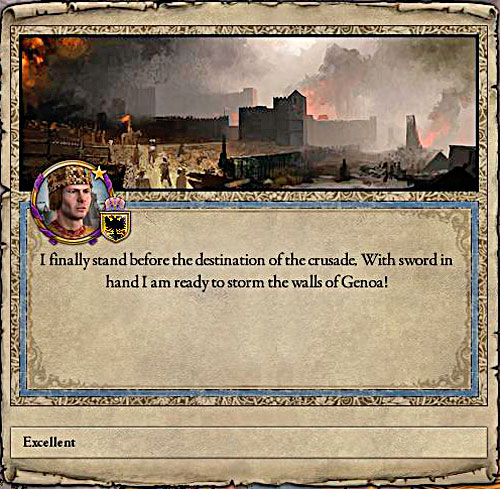 Even getting at the place means piety points and prestige income.

The biggest value of crusades is a fact, that they are massive events: many rulers want to endear themselves to the Father of the Church. It's very good, because enemy has to fight with few enemies and can't concentrate only on ne. So you can leave the hardest battles to the other characters and conquer the city which is a crusade's target (500 piety points and conquered lands) and end the war (screen below). 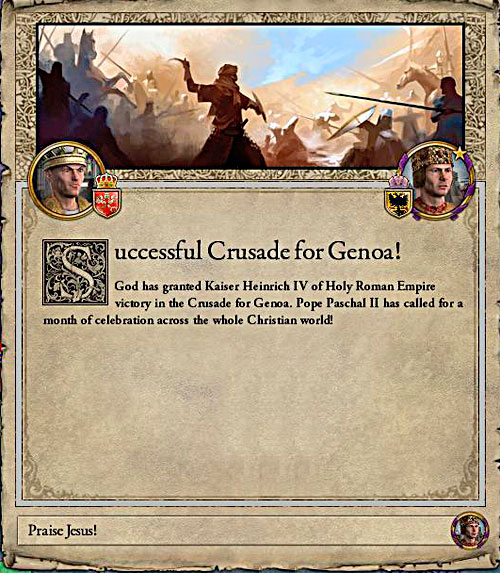 Victory in the crusade make the pope very happy.

On the other hand as you can guess there is a lot of rivals, what may be problematic. Sometimes you can be forced to play dirty to achieve the success. In such situation you can assassinate the character who is trying to get the victory- away from you (e.g. he sieges the target of the crusade). After that this fraction will have to declare a war once again what requires time. 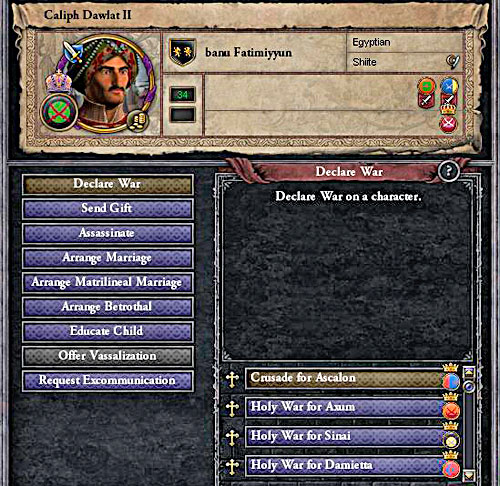 Crusade is a big undertaking, it's worth to prepare for it.

When the crusade ends, you have to care about the war trophies. Religion wars have different, not only religious goals. A character who conquer the land, can create his own country on the new lands. Of course it's similarly in the case of Muslims who has jihad instead of crusade.