Assassination is one of the most often and important diplomatic option. Thanks to one simple cut you can assure yourself the power (e.g. becoming a heir) or stop the uncomfortable war Military: Problem?). Killers are very powerful but dangerous tool: luckily, enemies use them rarely. As if the cost of one attack is only 50 gold, it's worth to use them ASAP. It's the easiest way of solving problems. 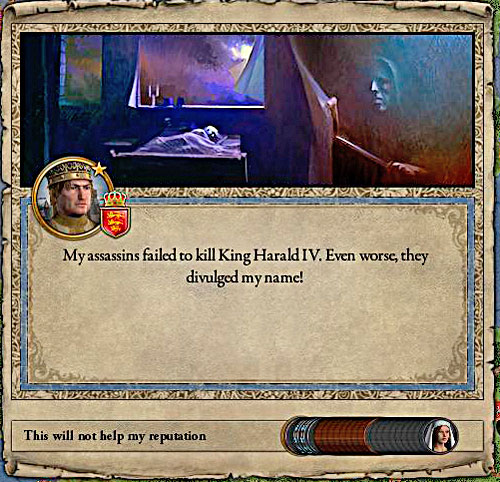 -10 to relation with vassals and -50 piety points. Assassins mistakes are very expensive.

The basic problem with assassination is fact, that they often fail. During making an attempt state intrigue (sum of player's, his wed and spy Intrigue)of attackers is taken into consideration and compare with the same statistic of the attacked person. Risk of the failure is big, and those are consequences:

* assassination succeeded, but the assassin got caught - although the attempt is a success, it's better to load the game and try once again. Enraged family of the killed person will hate you and all vassals will be disappointed. There is also a risk that the harmed House will try to assassinate you. What is more, you lose 50 piety points.

* assassination failed, but the assassin run away - only lose of 50 gold.

* assassination failed and the assassin got caught - the worst option. Attempt's target will be mad and, if he is rich enough, he'll send assassinates upon you. All of your vassals will be disappointed. You also lose 50 piety points. Better load the game. 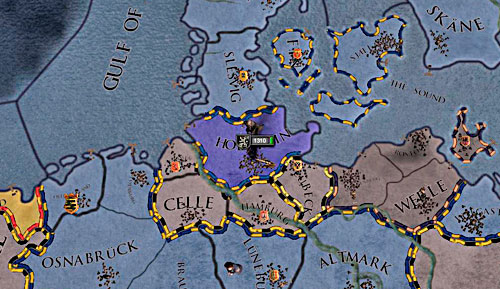 Inconsiderate assassination made that the Danish Holstein get into French hands.

What are practical usages of the assassins? Besides mentioned taking over the power and interrupting the war, also caring about order in the country is important. If there is a suspicion that part of vassals want to rebel, and you can't imprison them legally (Intrigues: Prisoners), an assassination is the best solution. But you should be careful in such cases, because it's easy to make the power goes to the inproper hands (e.g. other domain). In such situation regaining lands is very difficult and often requires a big war. (screen above). 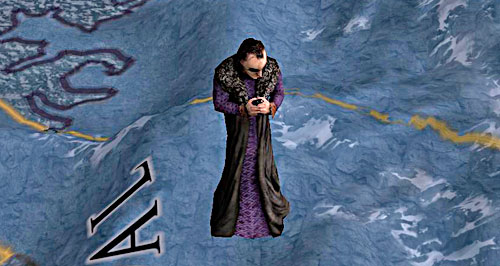 To increase chances of assassination, you can support the killer with the spymaster. Thanks to his Build Spy Network ability, he can make the task easier. But remember, that an agent who is doing that, can't do anything else at the moment so the whole country remains vulnerable for a while.