As it was mentioned, the game has no clearly definied goal. Despite that most of players tries to gather and keep as much power as they can, only few of them can be satisfied with playing as a count during the all game. That's why advices here are dedicated mostly to the players who want to cumulate as much glory as it's possible. In more details it's described in the chapter Riding on a Top. 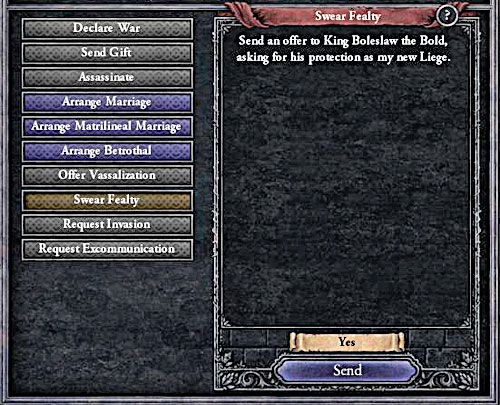 Rulers usually agrees to tributes, it increases their domain.

The basic thing you have to do is defining a situation of your domain. Depending on you play as a king or a count the game will be different. Characters independent form the sovereign have to state for themselves. If they are attacked by an enemy and have no allies, they'll have to fight alone. Vassals are here in the more comfortable situation, because if someone attacks them, he'll automatically attack their sovereign (who will defeat them easier). That's why sometimes is good to make a swear fealty to some king (screen above). It guarantees safety against of external enemies. To do that, click the chosen monarch and chose the Swear Fealty. 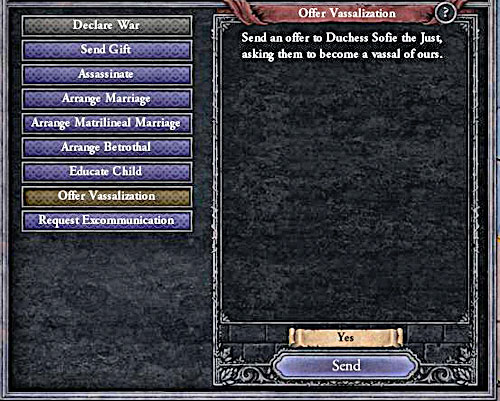 If the ruler is really strong, he can propose a vassalization to the weak counts.

Of course it's cozy only in some situations: if you attack someone, your sovereign won't do anything. Another detail is a fact, that the sovereign can take your lands. On the other hand: if you play as an independent character, what will protect you against invasion? Only two things, alliances and strong army.