It often happens that some character dependent on you makes some troubles: is no eager to help you during wars, want to rebel or is to ambitious. One of a way to make him away is to imprison him. If you catch one of your subordinate on plotting or he lose the civil war, you can arrest him without any consequences. In remaining cases you have to take into consideration a strong aversion of vassals. That's why you have to have strong proofs to avoid problems in all country.

Chain icon informs you who can be imprisoned with impunity.

Possibility of imprisoned character are very small. Such persons can't make any external politics, what mean no war declaration. It's essential information, because imprisoned vassal can refuse obedience to the sovereign. But it doesn't mean that the presence of the prisoner isn't a problem: he is still a legal owner of his lands. It means, that after his death those estates will be sign over to his descendants, and those for sure won't be happy about the prisoner's lot. The imprisoning also doesn't harm the vote possibility. If you have a election system (House: Succession) the prisoner can vote. It concerns also voting over laws (Laws). 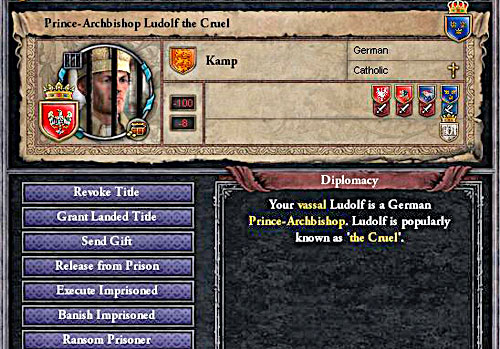 Even imprisoned, vassals may be problematic.

What you can do with the prisoner? You have few possibilities:

* Release from Prison - increasing your opinion about 10. It's rather unprofitable and very risky option: it is not excluded, that the vassal will decide to stand against his liberator. This choice should be made only when you're sure about loyalty of the vassal, so almost never. What is curious, if you're vassals have prisoners, you can ask to release them.

* Execute Imprisoned - killing the prisoner fruits with aversion of all vassals (-10 to opinion) and lose of 20 piety points. It's much better to assassinate the prisoner. It costs 50 gold and is risky, but the work can be done quietly (look at Diplomacy: Assassination).

* Banish Imprisoned - exclude the character from the kingdom totally and simultaneously confiscates all of his titles and money. It's very perceived by all vassals (-40 to opinion) and is connected with the risk that someone clever will give a warm welcome to the exile and decide to fight for him (Military: How to declare a war?) So if you decided to banish your subordinate, you should kill him ASAP. Gathered in such way lands it's best to distribute among enraged vassals.

* Ransom Prisoner - it releases the prisoner if he pays adequate price. It's nice choice in case of powerful characters (moneys!), but risky also: released character for sure will stand against you quickly.