In the Intrigue bookmarks in the upper part of the screen, you can find few windows. Thanks to them you can steer your intelligence and counter-intelligence and mark out ambitions and decisions. This element matters greatly in Crusader Kings II. Without a web of spies and informers you'll be blind and deaf what'll make a victim of other players. That's why ability of quick detecting the conspiracies an hiding your owns is a base of your reigns. 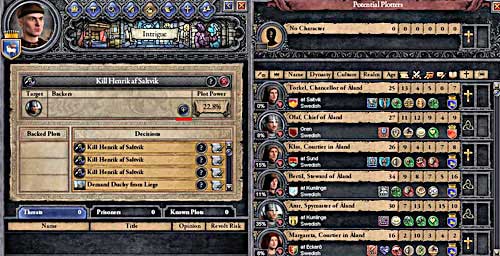 The more dangerous plots have not many supporters.

In the upper part of Intrigue window you can find the bookmark of ambitions and plots. There you choose long-term plans, concerning particular persons and events. Such decisions can have various character: from wedding, through plans regarding your hero's career until the coups d'etat, including assassinations. The crucial is fact that, the more plot's supporters gather (you add them manually, screen above), the more possible that it'll success. Every next participant increases scale of an action and its effectivity. Of course, not every noble has to agree to take part in such plot: many of them will be against, so bribes are necessary. 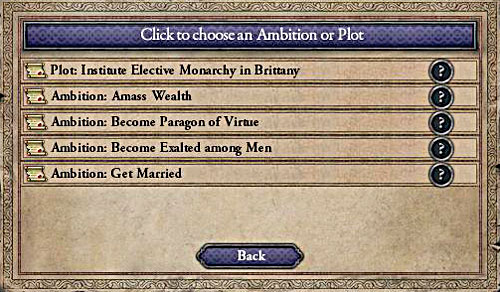 Only beginning ambitions differ. Later they are limited to assassinations.

Another detail is a fact that every person has his own court spymaster (Council) who can detect plots. If your conspiracy is discovered by your sovereign, he can imprison you with impunity (it doesn't affect your partners!) or ask for canceling plans. That's why you should act carefully, when you're an intriguer, and wisely, when you're a ruler. Especially the situation of the second one is curious: sometimes it's more profitable to let the plot happen, because they are good for the kingdom. Of course, plots can be manipulated in various way. 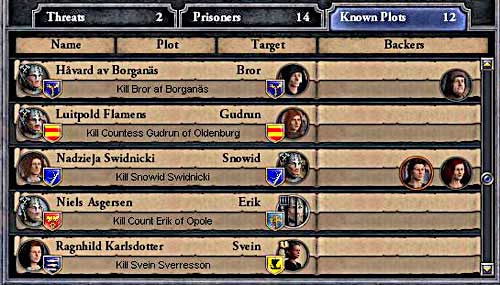 If the spymaster is good, all things will be visible.

Totality of discovered plot you can look through in the window of known plots (screen above. What is essential, the number and speed of discovering conspircies depends totally on spymaster's abilities and his ruler. You can't infiltrate your vassals if you don't have one.