When you declared the war and gather proper forces, you can attack. Basically, military actions you can divide on two groups: defensive and offensive. During the defensive ones an optimal solution is to concentrate two big armies in one place and get rid of the enemy with them. It's hard because opponent has a tendency to wander through all the country. Despite that, with mentioned armies you can drive him to the corner. 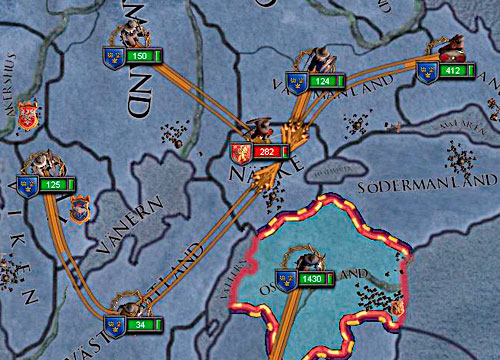 If there was no time to concentrate army, enemy can be surrounded also with the small forces. What matters, is slowing him down.

It's important to determine the conflict the smallest possible numbers of battles. In such way you end the war quickly and with minimal loses. If enemy decides to make a wide front (attacks many provinces at once), the tactic mentioned above will be priceless: your armies will easily defeat enemy's troops. But if the opponent decides on attacking one, big army, try to avoid him and play with, he'll soon start losing men because of bad supplies at the enemy's lands.

During deceiving an enemy, be careful and not let him catch any of your armies.

It's the other way round, if you're an attacker. The perfect here is Blitzkrieg: attack enemy with few big armies which will get rid of his troops and then locate them among opponent's lands (screen below). Such way of struggling prevents cumulating enemy's army. Another value is fact, that this solution let you conquer all fortresses quickly: they'll be sieged at once so enemy will have a problem with saving them. If opponent gathers one big army, you should join as many troops it requires to have a number advantage. Then just beat him in the final battle (mercenaries are useful) and back to the kingdom's pacification. 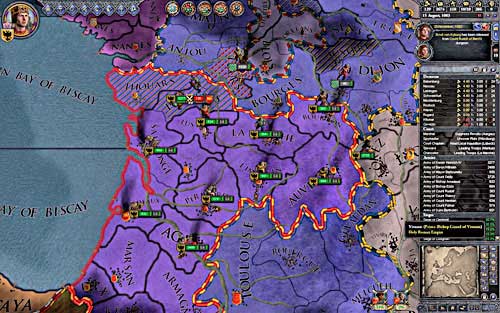 It's important to occupy all enemy's territory quickly.

The crucial stage of every campaign are sieges. Thos can be played on two ways: starving enemy or assault. First solution is much better because it minimalize our loses. But the flaw of it is its time: some sieges may take even few years. Another thing is that to starve sieged enemy, you have to have a bigger army, what is not always possible. So, when you're in the rush, it's worth to assault (sword icon in the window of the sieged province, screen below). During such operations, you have to look carefully at the fortress's advancement: the higher it is, the more loses you will have. Independently from the method you chose, attacked counties stop gathering armies only when you conquer all their buildings. Seize them permanently you can only at the moment of finishing the conflict and if it was what the war was about. 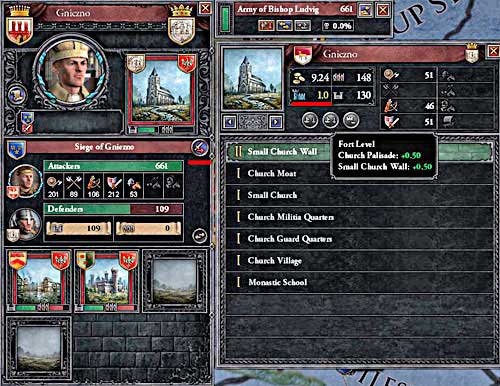 Icon of the an assault (from the left) and fort's level (from the right).

During military operations you don't have to fight alone. You can call up for allies, if you have ones. Alliances are made thanks to marriages. When the conflict escalate, you can estimate if it's profitable to summon the support. Allies gain much more prestige than the normal participants, because they fight for someone other's business.

Icon of flag means, that you can summon an ally.

It's always worth to use additional troops, because sometimes they win the wars. Especially profitable situation happens when you're a count and you have some crowned friends: then they win the conflict and you gain lands. But if the computer player asks for help, it's rather not worth supporting him, because the only reward is prestige. Such refusal decreases your amount of prestige so, if an enemy is far away and can't harm you, you may agree and do not nothing.

This war will last, no one has an advantage.

Every war has to need with a peace. An icon in the right bottom corner (screen above) informs us who is winning. The biggest percentage value, the better is your situation. You can improve that state of matters by winning battles and sieges, and lose it by making all the way round. If you reach a 100%, you can force demands that were declared at the beginning of the war (in other situation you can only try to convince your enemy to). If non of sides can achieve an advantage, it's good to sign while peace, according to which status quo is kept. But what is important, in such case an attacker loses lot of prestige points and both participants have to take into account additional difficulties (are described in the menu of negotiating an agreement.

When the war ends, the truce begins which lasts 10 years. Breaking it is very expensive and that's why unprofitable. Computer payers never break it. 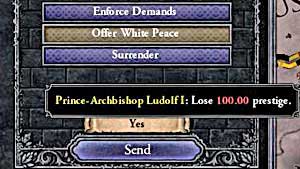