War is one of the most important element of every strategy game. Although in Crusader Kings II it doesn't matter that much, you shall pay attention to it. Medieval art of war is shown in this game in very detailed way. Unfortunately, as it happens in simulations, reality makes a lot of problems to the nowadays players. The most number of doubts cause an act of declaration of war, because it requires good reason (casus belli). To obtain such pretext, you can decide on one of possibilities which are described below. 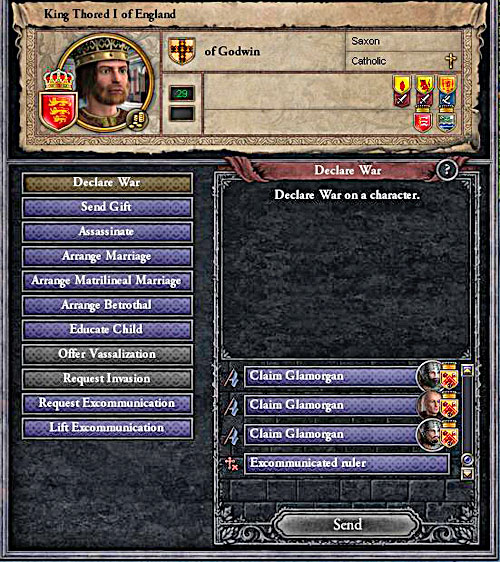 Every pretext is good.

The easiest method basing on sending the chancellor to the enemy land and usurp the power. It's described in the chapter Council: Chancellor. There is one flaw: you can seize only one county at once. 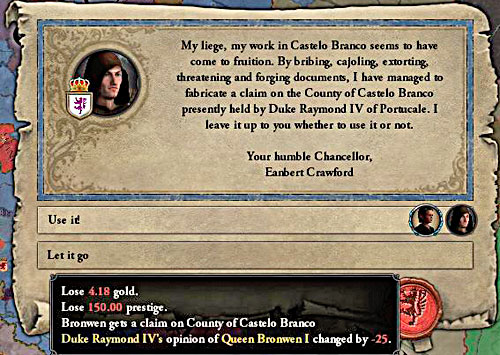 If the holy father declare a holy war, all Christian monarchs gain a casus belli against that target. Another values of this solution is fact that you gain pope's respect and 500 piety points. It's described in detail in the chapter Religion: Crusade. 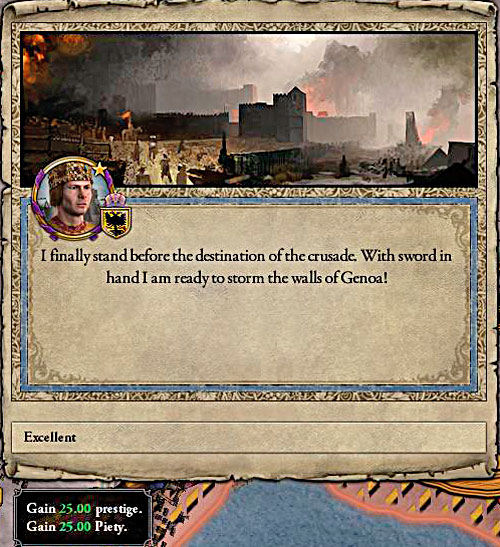 Not only success in the crusade is rewarded. Also most of sieges and even getting to the target.

If you have reasonable rights to the particular land, and you don't possess it, you can start a war in case of getting this place. Such claimants you may gain if you're one of the legal descendants of this territory or if someone took it from your parents. What is more, if any county leaves your kingdom, you can fight to regain it.

Another argument that can be used is an integrity of the country. In frames of the kingdom de jure an owner of its crown can fight for the lands that are out of his power (filter in the right bottom corner of the screen). An additional thing is usurping rights to some land. For instance, if you usurped rights to the Great Poland (duchy), he automatically gains casus belli against all terrains included in the de jure of this kingdom. Special statement informs you when it's possible. 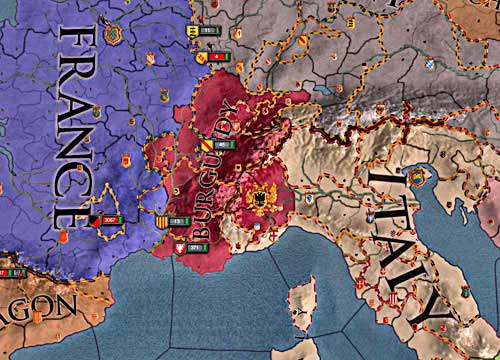 Owner of the Burgundy's crown can declare a war to everybody who have at least a piece of his de jure lands..

Both player and his subjects can declare war thanks to intrigues. If in the bookmark Intrigue at the upper part of the screen an intrigue which goal is to change the political system, defeat the ruler or regain independence, it'll be connected with declaring a war. But remember that the goal of confrontation is clearly defined and you can't cross it. So if you're fighting for the change of the political system you'll gain only that (plus prestige, of course). Unfortunately such plans show up in the game very rarely. 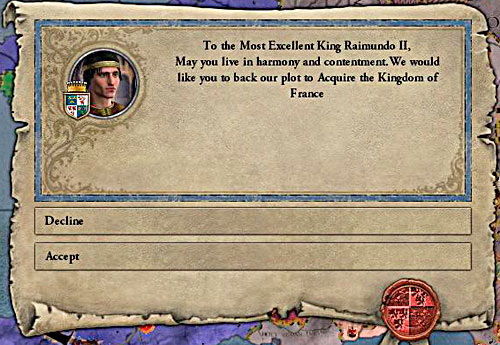 Sometimes NPC's convincing you to take a part in the war intrigue. It's worth to consider their proposition.

If you have at least 250 piety points (500 in case of the emperor) you're catholic and not at war at the moment, you may ask the pope for the blessing for an invasion on the other, Christian country. Win in such war allows you to seize all domain of the defeated enemy but with two catches: enemy has to have more land than you, and all the operation depends on Holy's Father will. 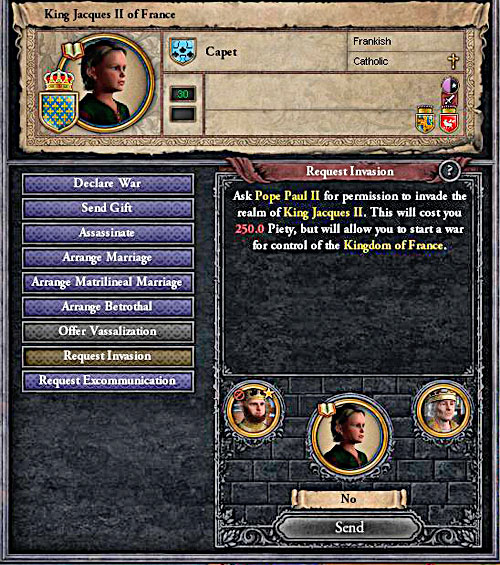 Attack on the excommunicated person

If some monarch get excommunicated, every catholic can declare war at him. It's comfortable because if you're respected by the pope, you may ask about excommunication the chosen character. It is described wider in the Religion: Basics. 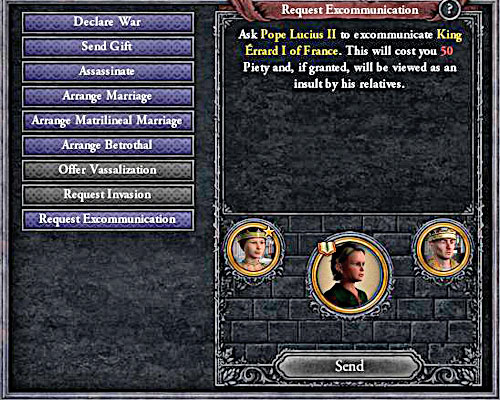 Persons who are adult members of the Church can be excommunicated.

Vassals' right to the land

If any of your subordinates have right to the particular territory, you can submit his demands and declare war to the actual owner. In the case of victory, the conquered lands go to the vassal, not to you. That's why such intervention isn't always profitable. On the other hand, it's cosy way, because it doesn't require much effort. You just need to Invite to Court one of descendants of the debatable province and declare the war in his name. If the achieved titles are not equaled with yours, you'll gain new subordinate with all his territory.

After win war it's worth to think about seizing vassal's lands.

If you want declare a war to the infidels, you can do it in every moment. Heretics aren't protected by any law, so you can conquer their lands with impunity. But remember to convert the heretic province after the winning. 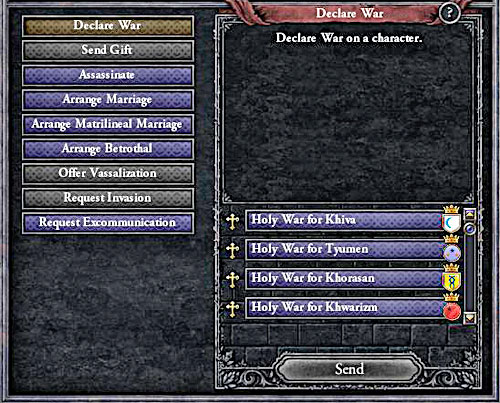 You can fight for all kingdoms too.

The least profitable war is definitely war in defence of the faith. Rulers deciding on joining to the anti-muslim coalition can lose much things and gain only prestige and piety points. You don't get any territories in that way.

Fight for an independence

If you're dependant from some ruler, it's worth to refuse obedience and fight for an independence. But be careful, because usually monarchs have more army, so it's a good idea to have some allies. 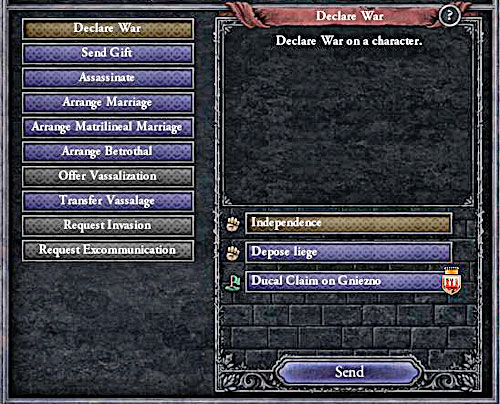 Usually it's better to take over the crown from the sovereign, than fighting for independence.

Taking over the crown

If you're dependant from some ruler you can declare a war at him. If the rebels win, you or the legal descendant (so check it carefully earlier) will gain the crown. It's a problematic way of gaining the power, because it requires carrying out a brilliant military operation. Besides, it's more worthwhile to assassinate the monarch. 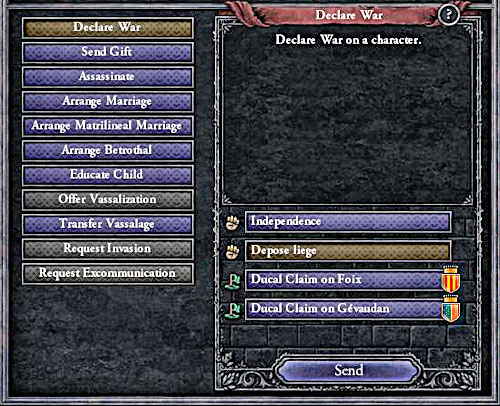 Duke can become the king, he jus needs to win the war.
See/Add Comments
JOIN FOR UPDATES