Some technology developed much slower than that Crusader Kings II shows it very clearly. To upgrade knowledge at some point you need to sacrifice many years of researches and sometimes also money and political influence. Bonuses you get thanks to that are noticeable, but they grow so slow, that you don't spot it. Another problem is a fact that every county has its own development level, so it happens that you have both civilised and developed lands and technological desserts. 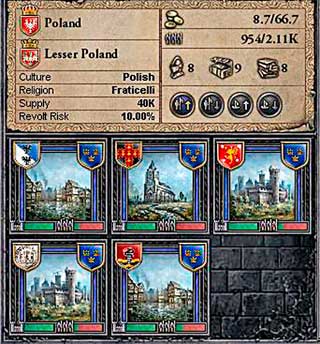 Sum of technological levels in the particular county is seen in its profile (icons of helmet, chest and books).

Technologies divide on three categories: military, economic and cultural. First serves as an army upgrade: its resistance, attack and morale. Economy, as you can guess, increases your incomes from counties and more advanced structures (look at the chapter: Economy). Cultural technologies improve your relations with vassals and increase the amount of received piety and prestige points. All of those technologies are important, because they let us improve the kingdom. 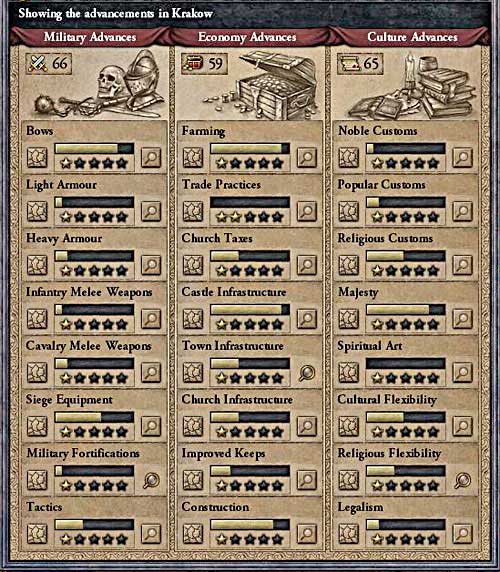 The more technologically advanced county, the bigger bonuses you receive.

How speed up discovering new technologies? The easiest method is choosing one topic on which your scholars should focus. You do it by clicking on the icon of magnifying glass in the window of technology (screen above). If it isn't enough you can support with the members of council, most of them have abilities which improves the tempo of discovering. Eventually if you have a lot of money you can build university (in the city) or school (in the bishopric). Those constructions are very expensive, but they improve the tempo of researches. 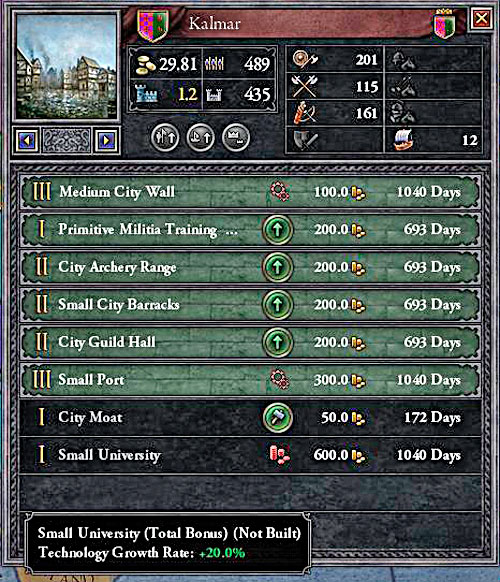 University is expensive, but sometimes profitable.

During level ups of counties you can notice that it happens in slower and slower. It happens, because the more advanced estate, the more time takes to research new thing. Such issue tries to force you to concentrate on technologies, but much more important in this game are wars, intrigues and dynastic matters. Nothing bad will happen, if you leave the counties on their own. That's why it's more profitable to focus on the remaining elements of the game.