Laws are very useful tools, thanks to which you can control your lands and define the rules of reigning them. Every change of it meets the reaction of subjects. If the ruler decides to make law harsher you may be sure that your subjects won't be happy. That's why you always have to prepare well: not only by persuading characters but also by gaining an army and moye, thanks to which you'll be able to defeat further opposition. 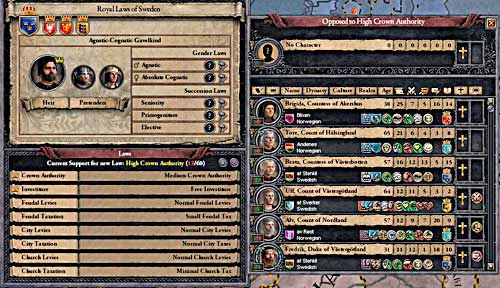 Some of subordinates is against - you need to convince them or kill (imprisoned still can vote).

Laws can be divided onto three categories: concerning succession, royal and normal. First ones were described in the chapter Succession, the rest you will find below. In case of two last you need to remember that ratifying them requires agreement of majority subjects. Special situation force royal laws, because they take into consideration only vassals from the "kingdom de jure", what is not necessarily real borders of the kingdom. In the bottom right corner you find special filter, thanks to which you can get to know borders of such kingdoms. After that you need to convince persons to your ideas with bribes, title and land distribution. More about that you can find in the chapter Characters: How to care about human relations?