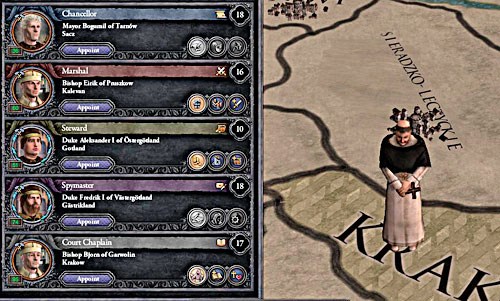 Chaplain is essential during expansion on the fidels lands and to fight with the heresy.

Head Local Inquisition - it gives small chance of converting the county or big of converting the person in it. It's very important ability, without which expansion on the fidels' territory won't be possible. Of course, such actions aren't always subtle and delicate and are connected with the risk of heresy and attacks on the chaplain himself. Nevertheless, it's the most useful ability of this character if you have some provinces with the faith other than yours.

Research Cultural Tech - increasing greatly speed of technological development in the chosen county. It also gives a chance of finding a philosopher (prestige bonus for money). Using this ability means, that the chaplain has to say, that sb is a heretic, and not always it's true. In such case you have to decide if you put the suspected into the jail or ignore the denunciation.

Improve Religious Relations - nice ability which allows you to increase the respect with which you're treated by the people of Church in the chosen county. Of course sometimes chaplain may enraged those people instead of securing their support.

The most important feature: Learning