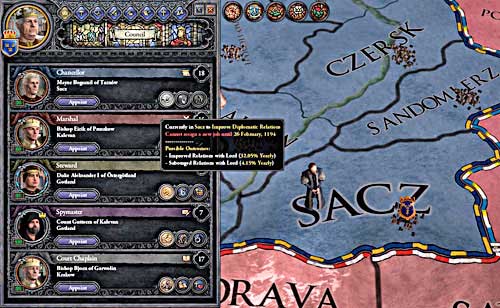 About where the problematic noble lives informs his crest (on the map and the profile).

Improve Diplomatic Relations - his basic ability. When the player send a chancellor to the terrain where unfriendly person lives, he can count on improving relations after a year. Agent try to persuade the persons with the highest rank at the beginning, but if he fail, he'll try that with the less important ones. If the chancellor fail completely (small chances for that), he'll alienate the particular person to him and his ruler.

Fabricate Claims - very interesting ability which allow on creating demands (casus belli) where there is non. If the chancellor will be send to the county outside his ruler's domain, he'll try to fabricate some documents thanks to which he'll be able to declare a war about the problematic land. It requires lot of money and piety points and links with the big risk. If the agent is caught, your target may imprison him, kill or even declare a war to you. So it's rather simply but problematic way of expanding your territory. Usually it's better to use marriage. More about that you may read in the chapter Military: How to declare a war?

Sow Dissent - relatively useful but often underestimated way of putting the country in order. This ability spoils relation between a ruler of chosen county and his subordinates. It's very handy when you want to get rid of or weaken inconvenient rulers without murders or war. Count who has to fight with his own vassals doesn't have a time and opportunities to harm you. In some situations he may even lose the war with subjects and all his influences and sometimes even all the county. Unfortunately, sow dissent is easily detected, so it's not always profitable. Others abilities of the chancellor are usually more useable.

The most important feature: Diplomacy