About how much moneys the count can provide decides not only the fact of possession but also level of development and existing laws (look: Laws: General laws). Important is a number of castles, cities and bishoprics and their development. Every from the mentioned structure provides other profits. Fortresses guarantee lot of warriors but not lot of money whereas cities provides lot of gold and big fleet but only few soldiers. Bishoprics are in between, assuring both gold and warriors. 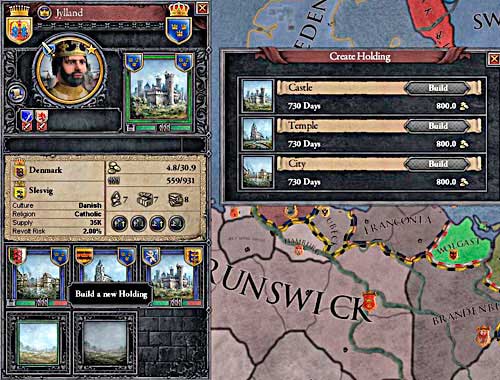 To build a new structure you have to mark the count and then click on the empty place in the province screen.

In every county (also dependent on indirectly) you may construct new structures, but every next will be pricier about 100 coins. Usually it's worth to develop your counties as much as you can, thanks to which you may create strong country. But remember not to award your subordinates with too many expanded lands at once (it's preferably that one character doesn't have more than one city/castle/church) because sooner or later it will be dangerous. What is important, it's more profitable to develop your lands than those belonging to your vassals. In such way you avoid middlemen, what maximizes your incomes. 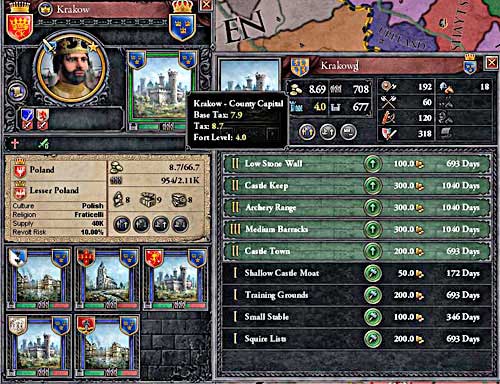 The main structure is always the most important one, upgrading its is very profitable.

Built cities, bishoprics and castles may be developed on various ways. Different cultures and religions have other bonuses and structures, but all are depended on the technological level of the county. The higher it is, the better (and pricier) buildings you may have and the longer time it takes to construct them. If you don't have lot of money, you should focus on upgrading those existing structures, because many of them are cheap and very useful. Particularly it's worth to upgrade main structures (in the right upper corner of the county window, screen above) because they are ascribed directly to the player and can't rebel. It's crucial during civil wars, since it let you generate high incomes and big armies despite war chaos. 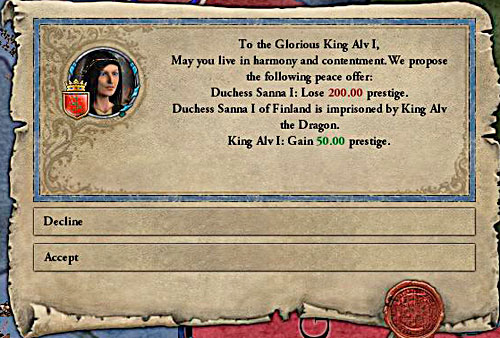 If the vassal rebelled and was defeated during the war, you can take away one of his land.

But sometimes happens that despite advancement and structures, the income from the county isn't satisfactory. Reasons can be various. You need to remember, that if the estate belongs to the vassal, your incomes will be always smaller. Even so, it's not always good idea to take the land from the vassal, because it may end with a rebellion or a civil war. The problem doesn't exist if the character was a traitor and attacked you. In such case you can rob him without any consequences (look at: Intrigues: Prisoners). 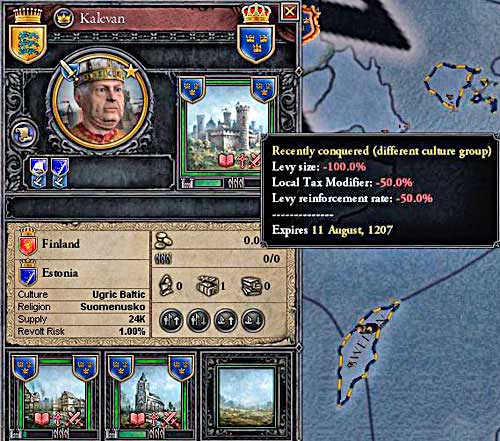 Game always informs you what the incomes are low.

Other factors that affect incomes from the province, are internal reasons like culture, religion and dissatisfaction. If the county was recently conquered, the citizens won't want pay to the new ruler. Similarly, when your culture or religion is different. Problem with war solves automatically: after some time peasants get used to you. It's a bit worse in case of religion. To convert citizens you have to send there a court chaplain to begin proper actions (Head Local Inquisition). While with the culture you can do nothing. Sometimes population will take your customs, but it's rare. Alternatively you may send there a steward who has a same culture as the citizens, but it's dangerous. During a war, he will have a strong support there.