Every character has a number of statistics describing its virtues and flaws. All those values affect the game, ones influence interpersonal relations, others on the course of battles and next influence the spy actions. Proper personal politics is very meaningful for the kingdom's development, it's obvious that military men should be good soldiers and priests to be distinguished with the good education. Statistics are affected not only by the inborn values (inherited from parents) and acquired abilities (look at: Traits) but also by many external factors like excommunication and education. It means that the characters of the personages will change as the time passed by and the perfect spy may change in a total manta within few days. That's why you should follow character's statistics. 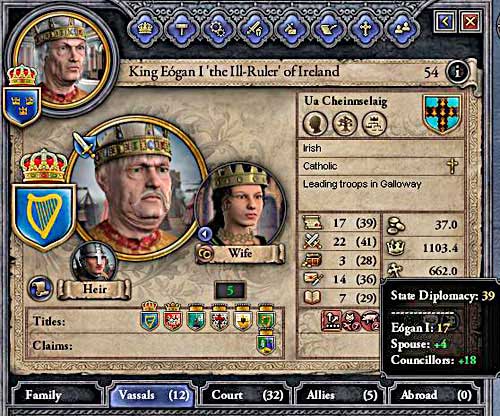 General value of the attribute is a sum of three persons' abilities: character, his wife and proper councillor.

Characters ruling some lands besides their personal attributes have also bonuses from spouses and councillors (screen above). Final value of the feature is shown in the brackets.

Below you can find the list of all features with the description:

Stewardship - important feature of every lord, increasing income in gold. Increases effectiveness of the Steward.

Intrigue - the most important for the Spymaster. Chance for an successful coup you may increase by building spy network.

Learning - crucial for the Court Chaplain because it influences his actions' effectiveness. What is more, it increases speed of technological development in lands depended on you.

As far as the features decide about the success of the character's actions, the traits affects on the statistics. For example if the hero is cruel (trait) it'll increase his abilities (statistics) of Intrigue but decrease his Diplomacy. All traits you gain during the lapse of time, but some of them can be inherited. You may decide about your character's development only when you steer her or you're his (look at: Diplomacy: Education of children).

Besides skills you have thanks to your birth and education there are also some types of personalities to which your hero is ascribed in his 16th birthdays. Those types depends mostly on possessed attributes but also they come out from the mentor's character. Every type of personality has a few levels of advancement which affect hero's profile. List of all regularity you may find below.