One of a way to please your subject's anger is distribution of Honorary Titles. They differentiate from the Landed Title that there is no connection with lands/estates, they are only signs of respect. It's very cozy method, because you have no lose and it increases incomes, prestige and vassal's happiness. 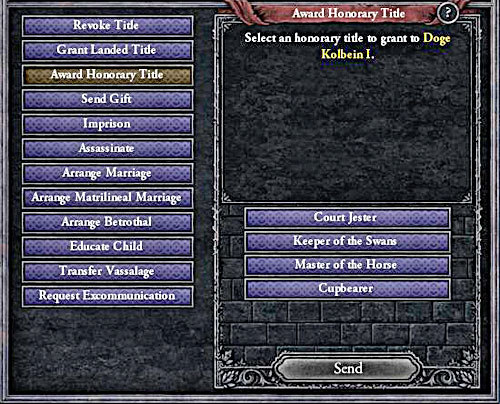 If bribes aren't enough, it's worth to distribute few titles.

Every title is unique, what means if you award one character with it, another one can't be awarded with it until the death of the first one. Most of title upgrades your relations with subordinates, but one, Court Jester, decreases them. So be careful and don't nominate some important person with that title. Unless you want to provoke him to rebel.

Below you find all titles. Values in gold and prestige are conventional, because it varies on the size of all country.