Crusader Kings II offers few ways to the victory. To get a fame and honors you don't have to make wars or care about economy, you can sacrifice to the diplomacy. It's known that the pen is stronger than the sword, and this game confirms it. It's much easier to seize the kingdom with the smiles and daggers than in a military encounter. The crucial thing are marriages, the best expansion tool that have been ever invented. But to use it correctly, you need to know some basics. 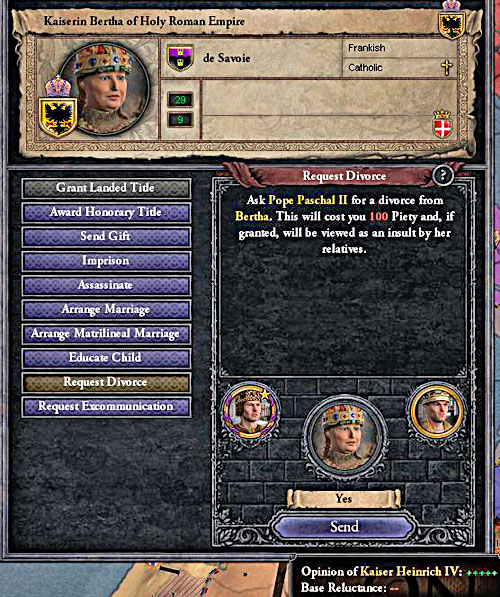 Every wedding should be considered, pope rarely agrees to the divorces.

There are three types of marriages: normal, matrylinear and betrothal:

Normal - the most common one. Wedding takes place between two adults, and children inherit the House after the father. If the wife possesses any land it goes to the her husband's House after her death (unless the law states say different).

Matrylinear - takes place also between adults, but children inherit all titles after their mother. Men rarely agrees to such weddings, because they have no profits from it. What is important, after the husband's death all his lands goes to the wife's House, what explodes the order in the kingdom.

Betrothal - it's almost normal marriage but between teenagers (or between a teen and an adult). Some plus of a betrothal is a fact, that you can easily convince your sovereign of. He'll agree sooner on sending his three years old daughter than the adult princess. Another advantage is that you can cancel betrothal what causes decreasing an authority in the cheated family, but it's better than the divorce or assassination. 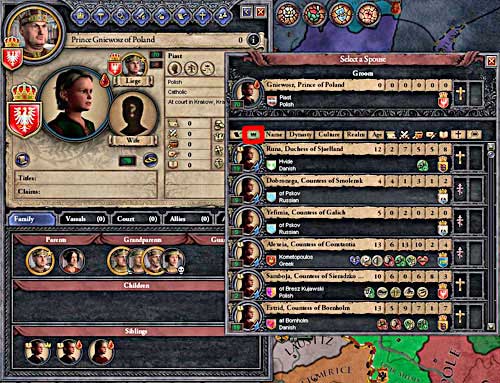 During choosing the spouse you can use filters.

Marriage is the easiest way to gain honours, but mainly titles, not the land. If the countess marry the king she becomes a queen consort, so the person without rights to the throne. Similarly: if a baron marry the queen, he won't become the king (and his son will) but only a king consort (look at: Glossary: Other titles).

Getting a duke title means so far that it makes the diplomatic relations easier. But much more important are possessed lands, so during planning the marriages take into account what the particular character has and if it gives perspectives for gaining more power for your House. Crucial is also an issue of alliance. Good marriage provides alliance with the secondary persons (look at Diplomacy: Alliances). How to cumulate estates thanks to the marriages, you can read in the next chapter.