Giving a power to the descendants is one of the most game's element. The most comfortable situation is of course, when the crown come straight from the king to the oldest son, without any voting and additional problems (like fratricidal fights). Unfortunately, the reality of Crusader Kings II is rarely comfortable and steady. Characters constantly throwing the logs under the player's legs, forcing him to think and balancing between influence zones. It's even more problematic since the succession laws can be changed only after completing six assumptions:

* he has reigned at least from 10 years

* there is a peace

* there is no regency

* vassals aren't fighting between themselves

* all vassals have positive opinion about the sovereign

Completing all of this assumption is a hard task, so in the Problem? section you may find few useful tips. 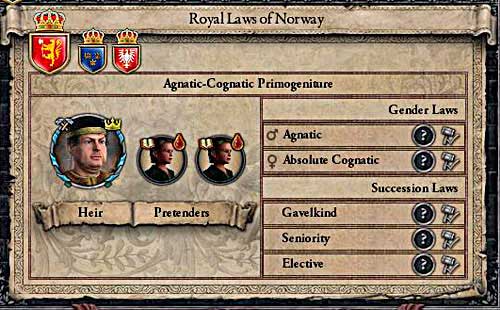 Many kingdoms mean many political systems.

Every kingdom you possess can have individual succession laws. It means that the king of Poland and Lithuania can subordinate to the primogeniture in one and to the feudal elective in the other. Each of those countries is treated separately, there is even no common laws about the heir's sex. Its consequences is a fact, that after taking the power in particular domain, you have to usually try to make a proper position for your descendants.

There are no doubts, that some political systems are more profitable for the monarch than the others. On next pages you'll read about all available succession laws. This issue is often problematic for the players, so I'll pay an attention to it.

Primogeniture is a rule according to which, the oldest son of the monarch takes all of father's titles. It's the most comfortable option from the available (of course from the player's perspective), but it causes much of rumors between monarch's sons. This fact gives a reason to have a minimal number of masculine descendants and few daughters (jump to the chapter House: Basics). Primogenitural model meets also a big aversion of nobles, so it's possible to realization only in countries with strong central power. 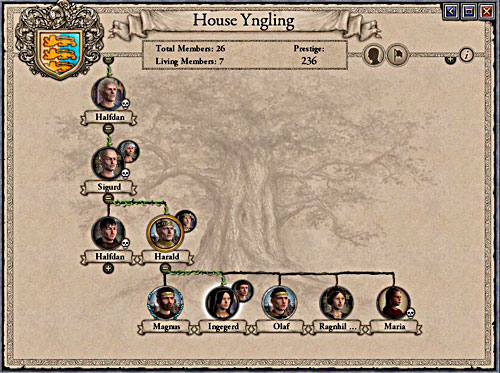 Son of Ingegerd and her husband (player) will inherit the throne after murdering Magnus, Olaf and Haralda.

Primogeniture is the simplest and the most intuitive system of succession, useful not only for kings but also for players who want to climb on the career levels. If this system is the actual one in the country, it's enough to marry one of ruler's daughter and then kill all her brothers and older sisters. In that way the second or the third generation you will gain the crown. More about it, you'll find in House: Marriages. 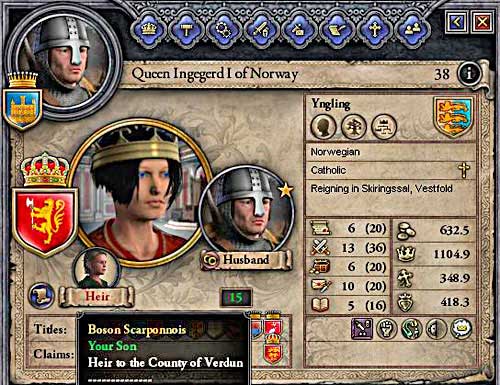 Thanks to the marriage with the queen of Norway, poor count may provide a crown of Scandinavian country to his son.

Seniority is a law according to which the oldest member of the family inherit all titles of the dead sovereign. It's very uncomfortable rule, because makes the oldest one is a successor and white-haired characters tend to die quickly what causes a chaos in the country. All the more that during the few first years of new ruler's reign there is a bigger probability of vassal's rebellion. In such case, the greatest danger for the player is his oldest son, who will try hard to take over the power and without hesitation starts civil war or coup d'etat. What is curious, often it's profitable to let him win, because the young has a chance to change the political system if that's why he began the war. 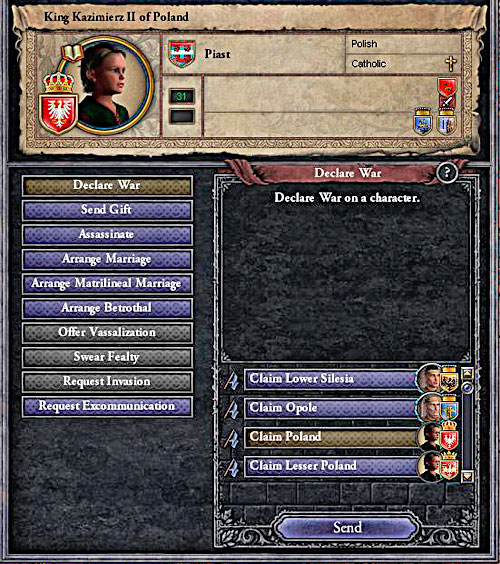 If you aren't patience enough to slaughter dozen members of the family, you may begin the war for the rights for your favorite one.

Taking over the power in such country is rather problematic (if you want to make it in the peaceful way). Usually you have to follow the family tree of the House you are interested in and then find the common ground (moment, when the man from your House and the woman from the chosen one have a marriage). Next you have to count all persons above this point. All those persons should have been killed or distributed a bishopric. Then you should get rid of all men in this House. Only at this point taking over will be possible, what, as you can see, isn't that simple. What is more, the situation is even more complicated if the country has a agnatic succession law. In such cases the only way is the matrylinear wedding, which is rarely acceptable for the men. That's why an open war is often the better solution.

Feudal elective is a rather common and simultaneously very problematic political system. Electors voting decides who will seize the power after the sovereign from all the vassals (ruling family members and king's council are also taken into consideration). Such fact makes the crown going from one House to another, what plunges the country in the chaos. 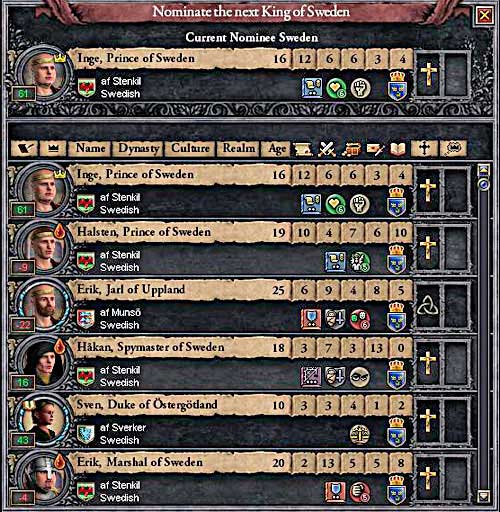 Electors are not only landowners but also members of the ruling family.

Electors are always the persons standing a level lower than the ruler. So when it's about king's succession the electors are all dukes, archbishops and doges. Similarly: about dukes decide counts, village headmen and duke-bishops and about counts: majors, barons and bishops. The only exception are emperors who have to take into account not only votes of kings but also dukes with the biggest amount of lands. Besides all those people, right of vote and election have also members of the ruling House.

Description of all feudal ladder you may find in Glossary: Titles. 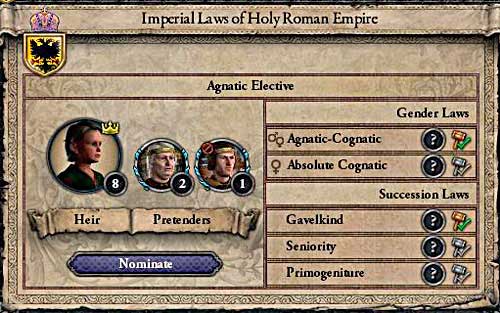 In big countries election is the worst possible political system - you have to change it quickly.

If the ruler has a big authority within his vassals, elective system isn't his biggest problem, because everyone will vote just like he wants to. It's much worse if there are different groups of agents of other monarchs in the country. There is no chance for agreement and losing of the crown is almost sure. In such way you should change the system or bribe electors with moneys and land distribution. Despite pretences the first way is much more profitable. 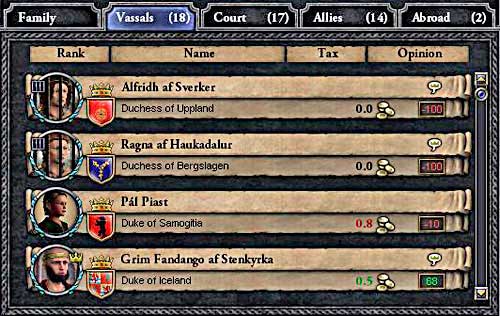 Imprisoned electors still have a right to vote (an icon of the crown at the right).

Taking over the country with such system is quite a challenge. Family links has almost no meaning in this case, it only means that the player can be a one of the electors or ruler's relative. It results from this that if you're playing as a duke inside a kingdom with such political system, gaining a crown should be relatively easy. In worse situation are the Houses outside the kingdom, because they cannot be electors and seizure the power is almost impossible (at least to the moment, when they become a ruler's vassal). 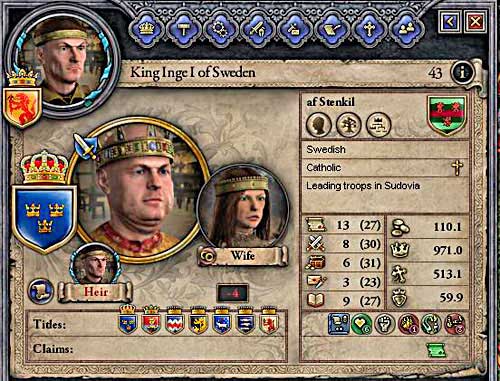 If you're an elector, you should convince counter candidates of you and then kill the king - the crown will be yours.

Gavelkind is the most common way of inheritance. It divides father's land on parts for every son, but the oldest one is a sovereign (e.g. first-born became a king and his younger brothers dukes). It's much more comfortable than the seniority and election but less profitable than primogeniture. The basic problem here is a size of the family. The more men descendants, the more dismembered the kingdom is. To prevent it, you should develop your House properly ( House: Basics). Some plus of gavelkind is a fact that the ruler can possess 30% more estates without penalties to the prestige for sons without land. 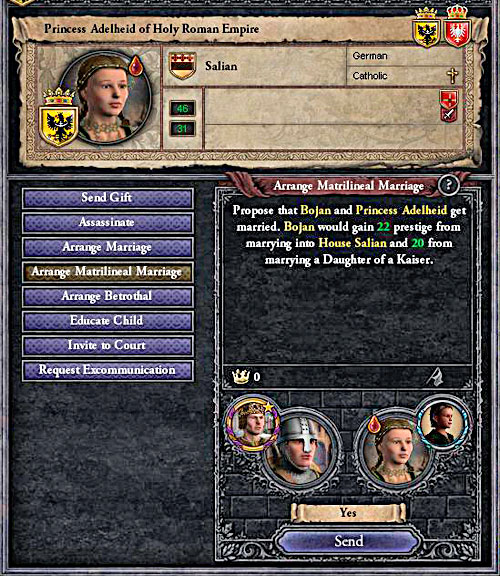 1. Invite third rate duke of Croatia on the court. 2. Arrange the matrylinear marriage between him and your daughter. 3. Kill all the older brothers of the prince. 4. Play as a prince's son, who is a Croatia king.

Gavelkind isn't a problem for players who try to takeover the power thanks to the marriages, just do like in the case of the primogeniture (screen above). After gaining the crown, it's worth to strengthen the position of your House.

A law, according to which only men can inherit. It's the most comfortable option from all, because it protects the kingdom from the enemy's intrigues. It's not hard to see that the kingdom with such political system can't pass to the other House thanks to the marriages. Unless you agree on matrylinear marriage, what is a very stupid idea. 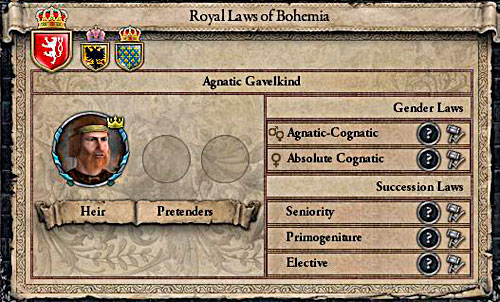 The biggest flaw of such succession is a great risk, because when all of your masculine members of family dies you'll lose the rights to the kingdom in which agnatic succession is obligatory. So be careful and have at least two masculine descendants (House: Basics).

According to this law, women can inherit only in the situation when there is no masculine descendants. It's the most common preference of the sex, which guarantees safety to the family but makes enemy's intrigues easier. Thanks to that rule acquiring the crown is relatively easy, it's enough to marry king's daughter and kill all her brothers and older sisters. 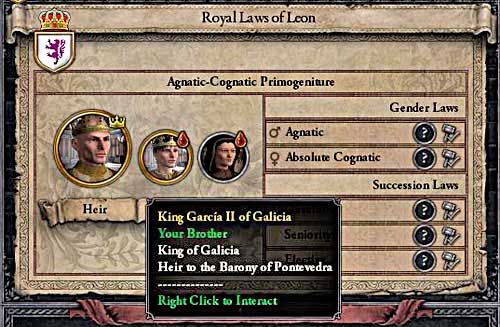 On the Iberian Peninsula accumulating power thanks to the marriages is a simple thing.

According to that law, women inherit the crown at the same rules what men. Only characters with Basque culture can take this option, but it isn't any quality. The main problem with the absolute cognatic consist in that just few men agrees to the matrylinear weddings, which are the only ones profitable for a player in this situation. 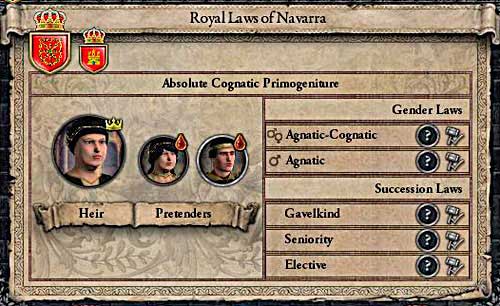 Woman-heir is a problem. Always.

Especially problematic is a situation in which there is a queen. If she had a normal wedding, all her children will inherit house after the father. As you can easily imagine, such situation may lead to the instant failure. On the other hand, if you play the character from the outside, in such way you may easily expand your territory.