As in every strategy from Paradox, in Crusader Kings II you have to use resources to develop your domain. But on the contrary to most games you do not operate on wood, stone or food but on some symbolical resources affecting hero's opportunities. The list of all goods gathered by the player you may find in the upper right corner of the screen.

Wealth - measure of actual richness of the character. Kind a currency using which you can solve most of problems in the game. Every county generates some amount of cash, depending on quality and fortune of infrastructure and governor's abilities. The biggest moneys you can gain from cities smaller from bishopric and the least from castles. You also pay soldier's pay in gold: be careful with mercenaries, because they can rip every treasury. During the game pay attention to having at least 50 coins, what is a cost of an assassin who often is a best way to solve problems. How to gather gold is described in the chapter Economy.

Prestige - measure of fame and character's meaning. For this resource you can buy many different things: it's required for a chancellor who fabricates documents, calling up the antipope and many actions resulting from random character of a game. You gain prestige thanks to the victorious battles, random events, won wars and some amount of it is also generated by possessed and depended estates. High prestige affect also your vassal's attitude. In the moment of character's death all his prestige is added to the score. So it's a crucial resource.

Piety - defines level of religiosity of the character, affects esteem he has within an elite of the Church. Piety points are given mainly for interactions with Church persons (especially the pope). They are required for example for divorces or asks for cancelling the excommunication. You gain piety also thanks to conquered and depended bishopric, personal features of the character and his storyline choices. But the most piety points you can get in co-operating with the Church (crusades, distribution of land to the priests). The last one is even profitable if you can give an investiture, what allows you to choose personally next administrators for your churches 9it also decreases pope's meaning as a political opponent). In the moment of death, all piety points are added to the score, like in the case of prestige.

Demesne size - sum of all cities, bishopric and castles you have. Duchies, kingdoms and empires don't count in. Every character has a limited amount of estates he can control. If he cross it over, his lands will be tormented by bandits, thieves and other problems. There are two ways of increasing this limit: distributing the land to your subject or a marriage. The crucial thing is not letting a woman to have a land: after a marriage it will belong to her husband (unless the marriage was made in a matrylinear way - look at the chapter House: Succession).

Realm size - sum of the cities , bishopric and castles possessed by the player and all his vassals. This measure has no real influence in the game, but it was observed that the higher domain, the bigger chances for profitable marriage.

Score - sum of a piety and a prestige of all characters you've played during the single game. The only one goal of score is to defining the quality of a House, because at the end you can compare your result with the Houses judged by the Paradox studio. 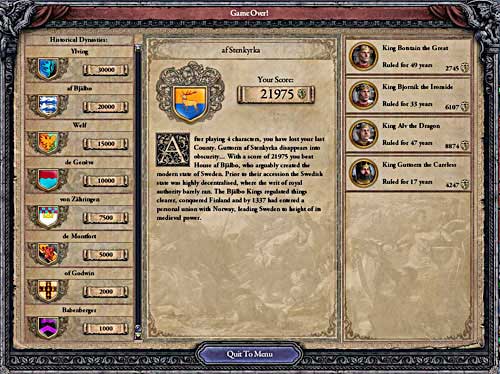 Sum up screen after the end of the game.
See/Add Comments
JOIN FOR UPDATES