Beginning the game, you can choose one of the hundreds available characters: from counts, dukes or kings to the emperors themselves. But variety of contest doesn't end on it, you can choose random historical period (from between 1066-1337) and geographical region. Every choice has direct influence on the shape of the play and possible challenges: you play different as a earl in divided Ireland and different as a Byzantium ruler who has to fight with hordes of pagans. The historical period itself affects the political situation on the map, for example from 1218 you meet Golden Horde and from 1225 Teutonic Knights. So depending on what kind of style of a game you like most, choose the more appropriate option for you. Below you'll find lot of advices and suggestions which should make your decision easier. 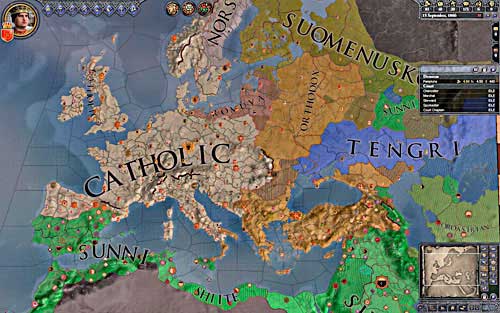 Catholics and Orthodoxes are the only available factions.

So, start from the fact that you can play only Christian rulers. In practice it means that you can't play as a Muslim or pagan, bit nothing stands against playing as a heretic. From the obvious reasons (no legal descendents) you can't also play as a Church Leader. It's also meaningful, because to get rid of someone in the hereditary line it's enough to nominate such person a priest, you don't have to kill him. It's wider described in the chapter Heredity. 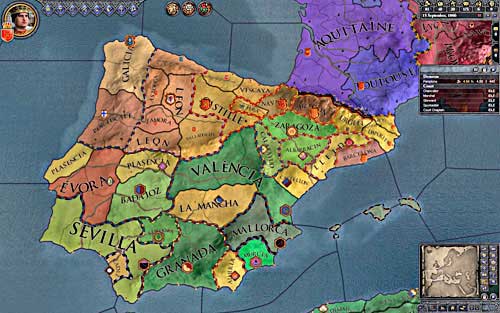 Iberian Peninsula is the most politically dangerous place in Europe - a perfect place for us!

Also choice of a region affects type of play greatly. Countries and lands on the border of Christianity (Iberian and Appeninian Peninsulas, Byzantium) are propositions for players who like more aggressive politic and constant wars (mainly with infidels). Those who prefer more peaceful ways may think about more central localization of their lands, like in Sweden, Holy Roman Empire or France. The state between are countries like Poland, Hungary and Denmark which have both potential of peaceful development (Christianity civilization) and free expansion (closeness of infidels).

Count is a worst situated from all available characters. Such person has usually one to few estates (counties) and are addicted from some sovereign, who can force his will. Your beginning options are rather small, you can develop your estates, build new structures, declare wars to others, participate in sovereign's rules by voting and slowly strengthening your position. The biggest counts' advantage is a fact that they have their own, personal army and they don't have to rely upon vassals. In other words: monarchs and dukes can have bodyguards only if they are counts simultaneously.

Another count's value are finances. Counties produce quite big profit and estates of higher level (duches, kingdoms and empires) almost nothing. That's why every monarch has at least one county. 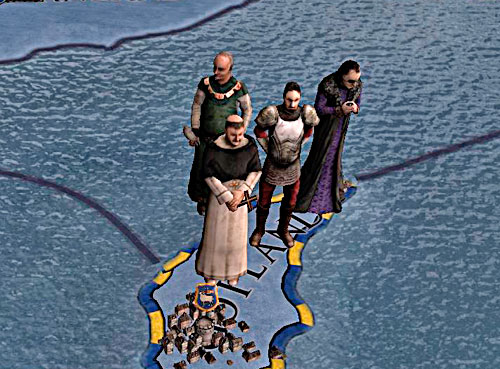 Another plus: count's clerks can concentrate on developing all his domain (for example one county).

Counts are a good choice for beginners. Not much responsibilities let you learn the game in calm way. It's also easy to reach honours, because monarchs rather eagerly make marriages with counts Houses counting on taking over your domain. Count is also a curious proposition for those who likes challenges, because there is nothing better than starting as a count and finish as emperor. Such type of promotion is possible but it won't happen without special diplomatic abilities and clever marriages and sometimes assassinations. Armed attacks won't succeed: the sovereign can crush you easily. 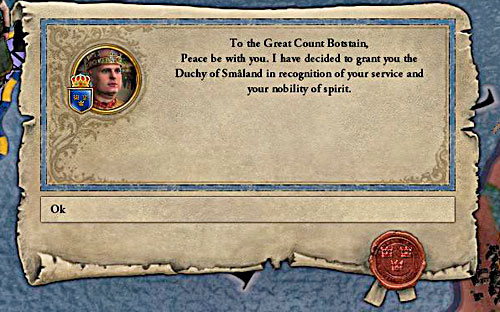 Counts are meaningless so monarchs give them privileges very often

The basic problem during playing as a count is his small meaning in the world. Little amount of army and moneys excludes an expansion and lack of estates, spreading your authority. It's also dangerous to stand against your sovereign - if he isn't glad of you, he may declare a war what will end in only one way. In case of counts who have only one province, you need to be sure that your subjects won't rebel. If they take over the palace, there'll be a coup (and you'll die in tortures). How not let this happen and lead your House to the victory, you may read in a Riding on a Top: Count chapter. 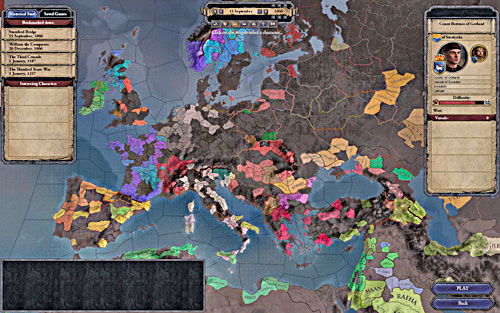 German, from east Europe and Balkans.

Spanish, from southern Italy and Byzantium.

Duke has a domain consisting of few counties which all together are called duchy. There is no upper limit of possessed duchies, because they aren't count into demesne size (look at: Basics: Resources) and thanks to that they aren't an obstacle during reigning the country. Most of dukes are subordinate to some monarch, but it isn't usually a problem. Although lack of independence you can make rather complex foreign policy and, what is more, count on your lord's support. Competences of a duke are rather wide, you can vote as an elector, wage a war, be in funds and even refuse an obedience to your sovereign what'll give you an independence. 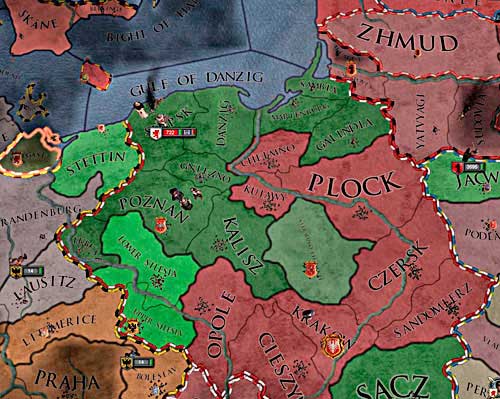 It happens that dukes (green) collect more power than a monarch (red).

Internal politics isn't too challenging on this level, but far more complicated than in a case of playing as a count. Duchy's lord has to care about subject's trust, without them he is no one. He can rule only thanks to his subordinates like counts, mayors and bishops etc. Without them, duke will be out of not only army, but also moneys (only counties generate meaningful amount of them). Preserving peace in your country is a very important part of the game. 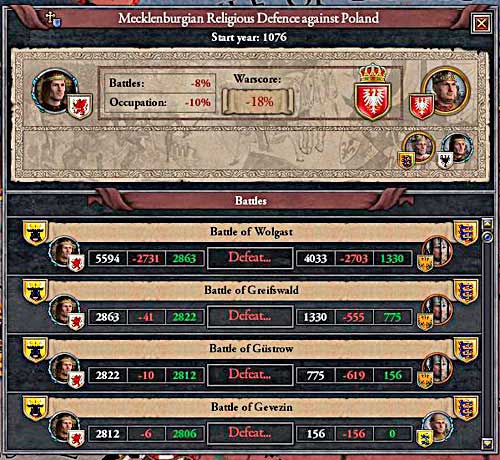 As dukes are important figures, they can easily cumulate the power, both thanks to the marriages or the military strength. Keeping balance between internal and external politics is a key to the success. If you provide a peace in your domain, you may count on expanding it. Big plus for playing as a duke is an assurance in a person of your sovereign, who can help you in a case of fatal loses on the front (king also takes care about rebellions). On the other hand, if your relation with the monarch is bad, you can predict war or assassination. Another flaw is a fact that sovereign can recruit part of your troops in any moment and use it to complete his own goals. You have no influence on that, it depends on your relation with the sovereign and the law. You can read how to handle this in a chapter Riding on a Top: Duke. 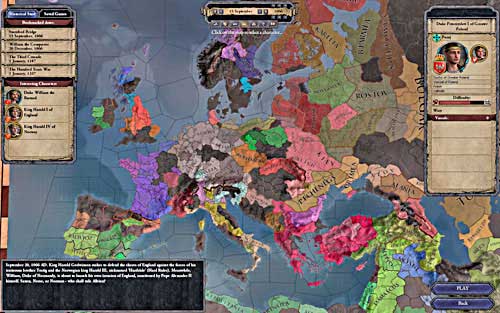 French, Polish, from Gaul and Scandinavia.

Spanish, from south Italy and Byzantium.

Kings are rather the most important characters in the game. There are also emperors who are able to control monarchs indeed, but their power is rather weak. King's possibilities are really huge. Besides all privileges which all lower status persons have, they are noble. Most members of the House have a title of "prince" or "princess" what makes marriages easier (everyone wants to have some blue blood in the family). Monarchs can control dukes and force them theirs will instead of conquering them. Kings as the only ones besides emperors, can decide about investiture (nominating Church's clerks) and define level of crown authority (look at: Laws: Royal Laws). 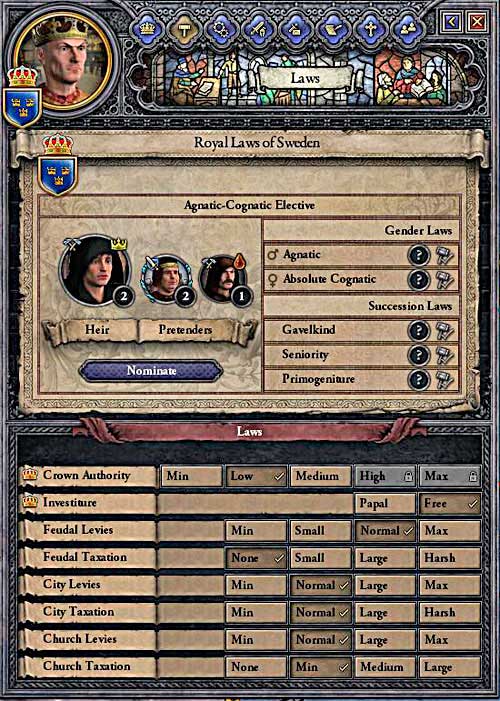 Only crowned heads can decide about investiture and crown authority.

Issue of heredity in case of monarchs is very complex. It can have different forms from primogeniture to an election (in other persons it's usually the gavelkind - right, in due to the oldest son has a superior authority over the rest, and the fortune is divided equally among them). Playing as a king or queen you have to always remember about assuring a crown to your children. Also crown authority is used to this task - it's a tool defining hereditary rules comfortable for you. The most important here are the rules of succession which are described in the House: Succession. 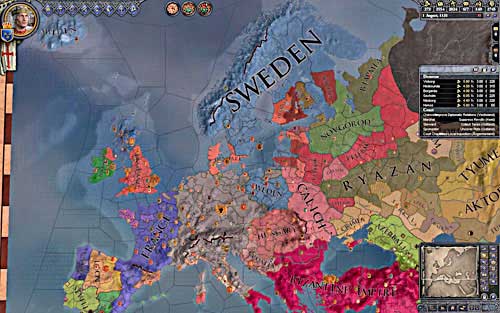 One king can have few crowns but he can't be superior to other monarchs.

Although monarchs have lot of power, they have to deal with a possibility of losing it. All his subjects want to stab him in the back, because everyone of them has own ambitions and goals, some for sure wants to take over the crown. So internal politics is as important as an external one for the king, because he have to control his vassals and look after in a many ways to limit their power. There are various ways you can do that: long and exhausting wars, assassinations, bribes and estates' disposing. The last one is the most dangerous, because it can lead to the situation that the vassal will have more power than a king himself. That's way we have to care that they have a good opinion about us. Also laws are useful, but there are double-edged (look at chapter Laws). How to rule your kingdom properly is described in a Riding on a Top: King chapter. 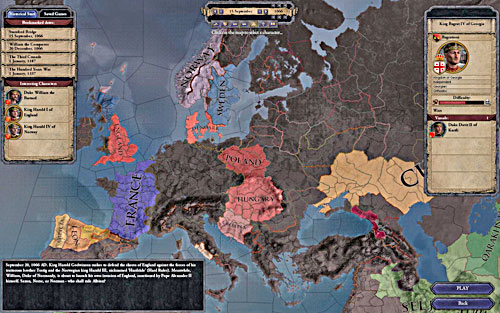 French (before a Hundred Years War), Polish, Hungarian and Scandinavian.

Croatian, Scottish, from Balkans (in later period of a game).

Spanish, English (in 1066), Georgian and from Jerusalem (during crusades).

Emperors are the highest level within heroes of Crusader Kings II, both at the power range and difficulty. German and Byzantium Empires are so huge, that managing them is quite a challenge. It's not about the size of it itself but also about number of vassals (every has its own ambitions). Such state of things allows emperors make a little of attention to the external politics. Their main issue is keeping the crown and life, because they have powerful enemies inside the Empire. It touches especially lords of Holy Roman Empire: their authority is weak and their vassals ambitious and powerful. 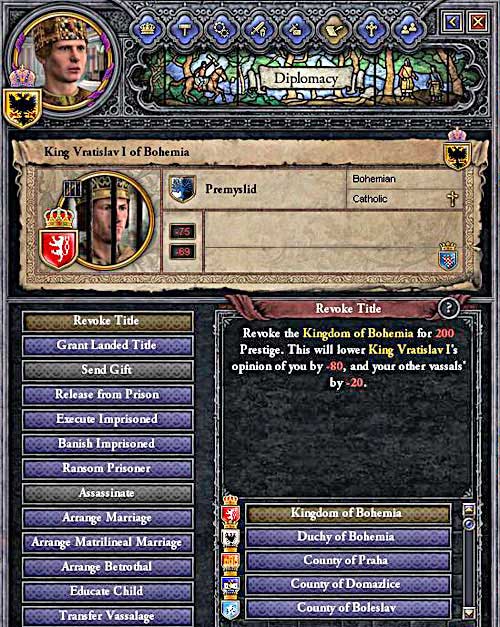 Emperors can not only take over crowns but also changes monarchs into vassals.

The basic problem during playing huge empires is a assure the power to your descendants. You can make it only according to the election laws, but those require permissions from electors, who have no interest in strengthening central power. That's why an emperor has to be clever as a fox and strong as a lion, because he won't handle this issues without all webs of intrigues and creating many exhausting, mainly internal, wars. But killing the electors won't solve the problem, because the right to vote will go to their descendants and imprisoning won't take away from them it. As you can see, playing as an emperor is a proposition for very patience and tough players only. 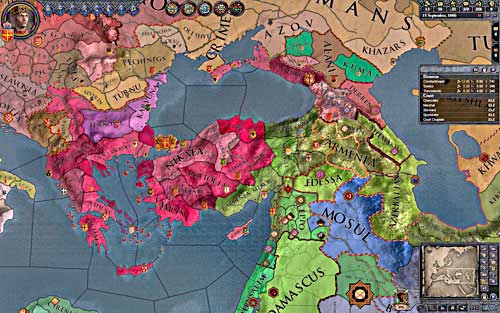 Emperor's land is divided between several dozen of vassals. Sometimes it's hard to handle this.

What you receive in return? Mostly an opportunity of ruling over kings. Emperor can conquer every kingdom and addict its ruler from him, just like the king force it to the duke. But in such case you have to count with another problems. Vassals of defeated king will be pas problematic as those in your Empire. That's why sovereign should care about creating some smaller domain which will be directly addicted from him. I mean group of counties and duchies from which emperor will gain money and army. More about this you can find in Riding on a Top: Emperor. 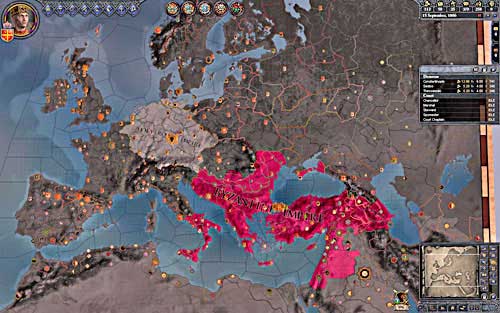 There are only two playable empires. You can't create new ones.

Besides sandbox mode of game, Paradox's programmers prepared also a number of smaller campaigns, what means some particular persons and problems you should handle. Most of campaigns have a really big level of difficulty, what makes them a challenge for those bored with building their own domain. 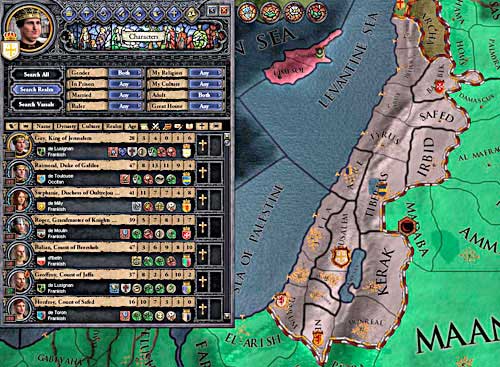 Although scenarios suggest choice of persons and kingdoms, there is nothing against choosing other ones.

Solutions to all scenarios you can find at the end of this guide.