Crusader Kings II was thought as a sandbox what means that only from player depends what will be his goal. There is nothing against playing as a poor, devout count who cares only about his small piece of ground, then you can develop your domain, support sovereign and think about bright future of your children. If it isn't fulfill your ambitions, you can play as one of monarchs or even the emperor himself, but then you have to care about large intrigues, inside wars and making advanced politics.

As you can see, the game gives you lot of freedom: you can play both as a blood thirsty monster who desires only for new lands and subjects and as a wise, proud lord who gains influence thanks to clever marriages and conspiracy. Your country can be ruled with an iron fist and bribes or common distribution, every way has its pluses and flaws. Depending on your playing style you'll obtain proper nickname, from "great" to "mad". 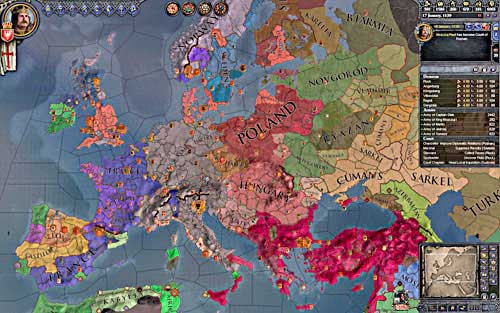 History can be changed.

Game's philosophy is very curious and original - it doesn't base on ruling a country but on developing your house. If it extinct (you have no legal descendants), the game is over. So one of the most difficult part of the game is to provide a worthy life to your clan. When you character dies, you continue the game from the perspective of his descendant. So it's not only about gaining as much power as you can - you also have to assure it to your children. 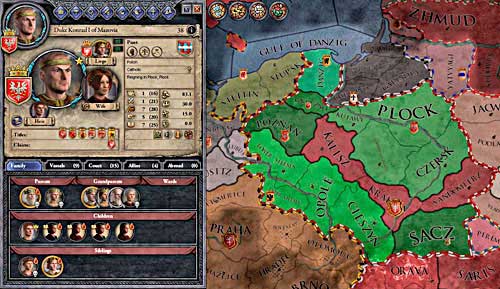 Maybe there'll be no Teutonic Knights in Poland?

Regardless of that you play as a emperor or a count, you have to think about the way of growing into power. Only then you'll be only to fight with others and don't get eliminated. It has to be marked, that raising children and planning some of their moves (like marriages) is a quite fun itself. Other things are explaining to child that he shouldn't attack other children and other is a determining quarrels between the members of a House. Who knows, maybe you'll have to kill one of them? Choice, as always, is yours.