On this page of the Crusader Kings 3 guide, you can read about the most interesting options when starting a new game.

The character set proposed by the developers is really interesting, but the best part of Crusader Kings 3 is that you can play almost any ruler on the map. For this reason, below we have listed some of the most interesting starting locations that you can find using the free ruler selection mode. 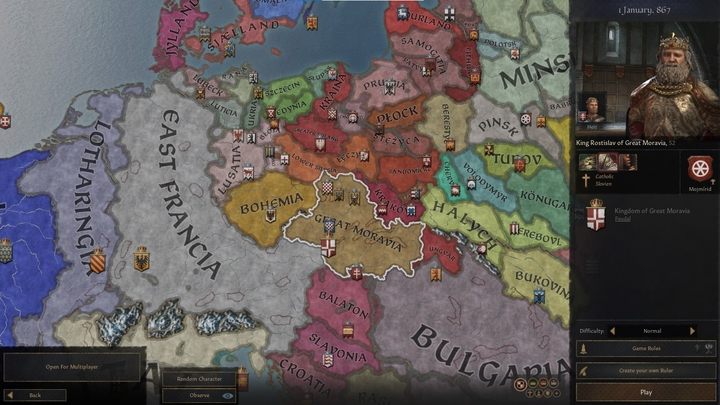 Start date: 867, difficulty level: easy - the ruler of Great Moravia is an interesting character both in terms of gameplay and history. Your task will be not so much to preserve this old Slavic state, which in reality was consumed by the murky depths of history, but to expand it. This shouldn't prove to be a difficult task, as you will begin the game as a feudal and Christian ruler, which puts you in the perfect position to immediately begin conquering the local pagan tribes. As King Rostislav, you won't encounter any issues in the matter of inheriting the throne, which will greatly facilitate the construction of the Slavic empire. 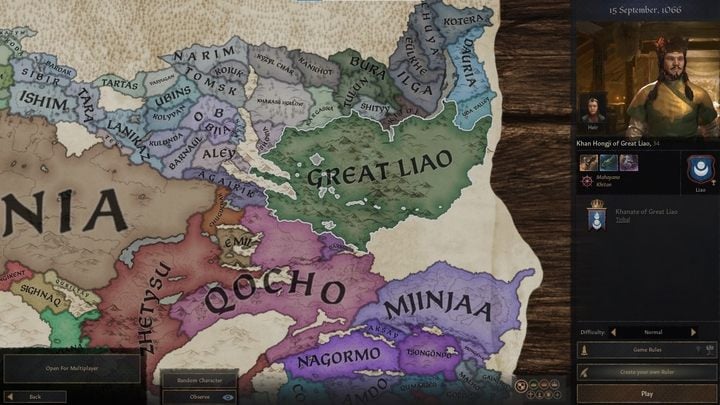 Start date: 1066, difficulty: medium - playing as the Liao dynasty is probably the fastest way to create the Mongol Empire. This solution isn't exactly historically accurate, but it can undoubtedly guarantee a very dynamic playthrough. Initially, you have to prepare for the numerous wars against the lesser tribes on the Great Steppe, but later during the playthrough, once you have become the leader of the Mongol Empire, you can set off to conquer literally the entire map. 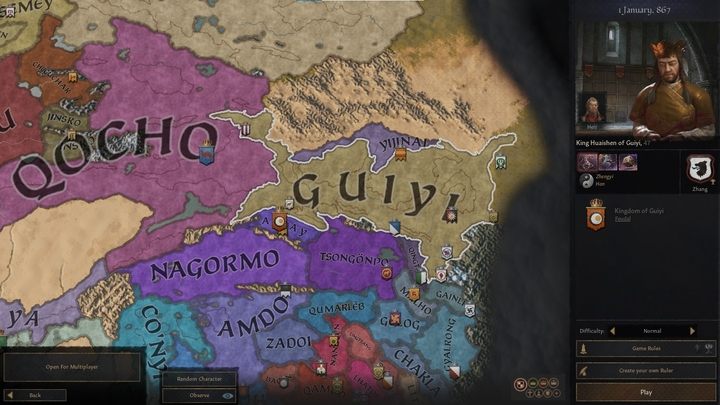 Start date: 867, difficulty level: medium/hard - another very interesting location in the Far East is the kingdom of Guiyi. This country was added in patch 1.1, and its most interesting feature is the Han culture. At this point, this is the only way to play the game as a Chinese nation without the use of mods. However, the geographic and political location of this kingdom can prove quite difficult to handle, but at the same time, it can provide a fun challenge for more demanding players. 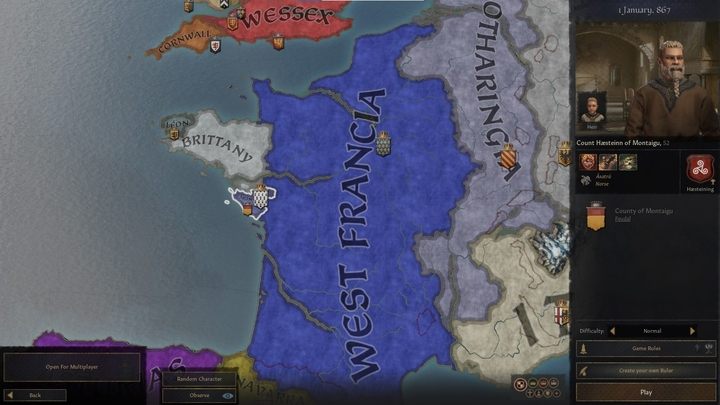 Start date: 867, difficulty: medium - Count Haesteinn is a true conqueror with great potential. You start out as a pagan ruler on the fringes of Christian Europe, with a pretty solid set of traits, extra troops, and a huge dose of prestige. Given all these starting benefits, you can set off to conquer Europe or any other place on the map. 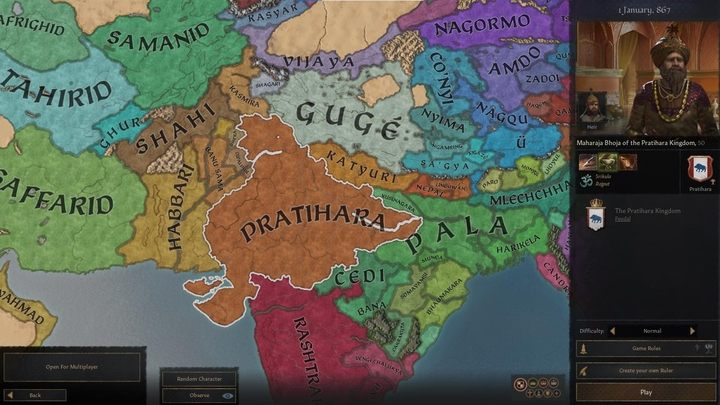 Maharaja Bhoja of the Pratihara kingdom

Start date: 867, difficulty level: medium - the main advantage of the Pratihara kingdom is its very high development level. Some counties within this realm may even compete with Constantinople in this respect. This gives a significant economic advantage, which is extremely useful, especially since the political situation of Pratihara can quickly lead to its collapse. Its unique historical setting is another advantage of this location. 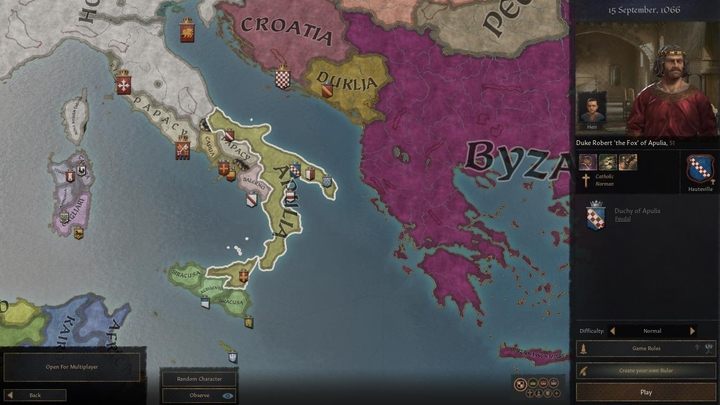 Start date: 867, difficulty: medium - Robert de Hauteville is a famous Norman conqueror from the second half of the IX century. He rules over southern Italy, giving him a very interesting starting location from a strategic point of view. From here, you can easily conquer Muslim Africa or the Middle East, stir up the political situation on the Iberian Peninsula and even challenge the mighty Byzantine empire. This makes him another traditional conqueror, although he is definitely more difficult to play as than Count Haesteinn. 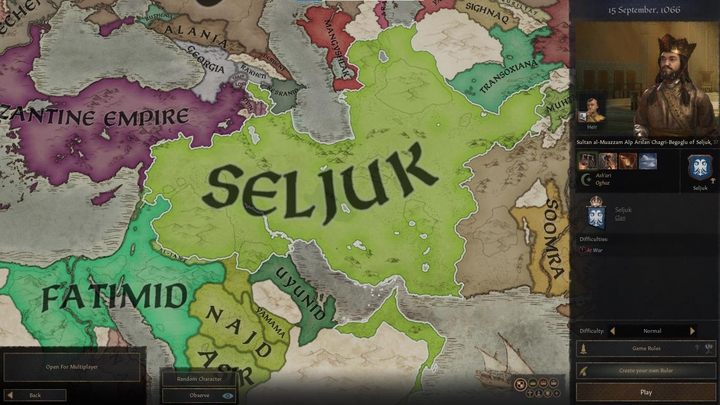 Start date: 1066, difficulty level: medium/hard - the sultanate of the famous Turkish dynasty is another historically interesting starting location. On the one hand, you will start out with a large and powerful army, but on the other hand, the variety of cultures and religions within the sultanate can quickly lead to its disintegration. For this reason, it's also worth keeping an eye on the ruler of Uqaylid, who is subordinate to the Seljuks, as he has the opportunity to establish the historical Sultanate of Rum, if he manages to pacify a significant part of Byzantium. 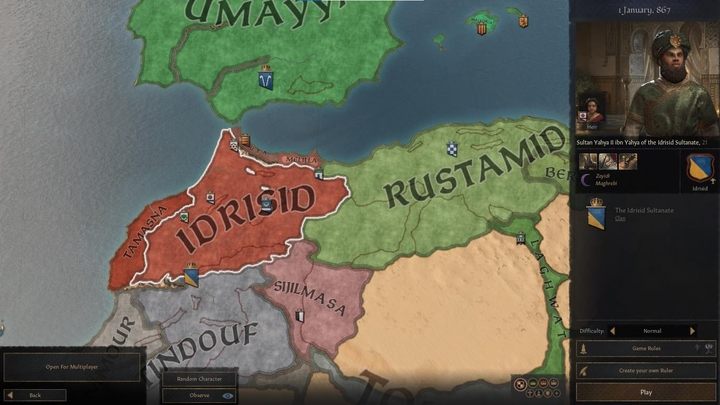 Start date: 866, difficulty: medium - another interesting starting area is located in Africa. As the Muslim ruler of what is now Morocco, you will be in a good position to further expand directly into two different continents. Both your character's high diplomatic skills and a fairly powerful army will help you in your expansion efforts. The son and successor of the sultan, Prince Al-Qasim, is also worth noting. At the beginning of the game, he is only 6 years old, which gives you a lot of opportunities to influence the future ruler. 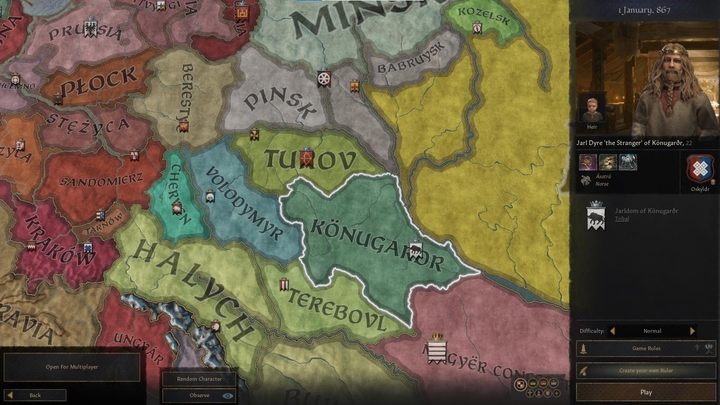 Start date: 866, difficulty level: medium - the ruler of Kiev is an interesting alternative for fans of Slavic climates. Like Rurik, Jarl Dyre is a character from the Nordic culture, whose lands are mostly Slavic, which provides you with interesting opportunities for expansion in this area. This character's good starting set of traits, his ties to a powerful Viking family, and Kiev's strategic location will also provide you with plenty of opportunities to shape the political situation in Eastern Europe.