Crusaders Kings 3 isn't a typical strategy game, so the ultimate goal of the game may be unclear at first. Your main task is, in fact, to write an alternative history of one of the many medieval lineages. To achieve this, basically all you need to do is survive until the end of the game, i.e. until 1453. However, since this is a sandbox game, even this condition is not entirely binding. Depending on which gameplay mode you select (more on this later in this chapter), you can continue the game even if your family expires before the aforementioned end date. So really, the main goal of Crusader Kings 3 is to delve into the story generated by the game. 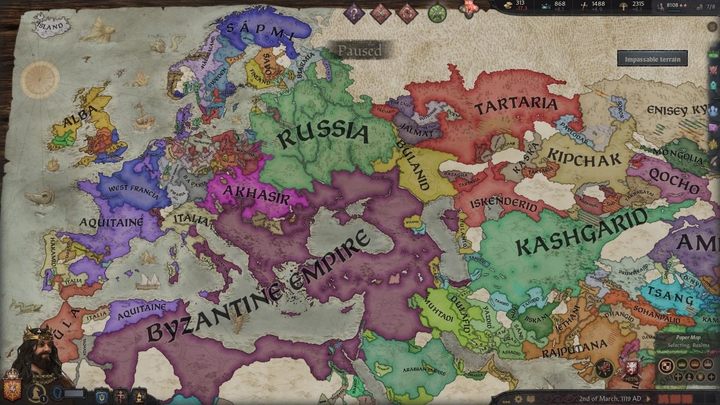 When I started my playthrough with the Rurik dynasty, I aimed to form an alliance with the Byzantine Empire and defeat the Khazars in preparation to defend against the Mongol invasion. However, I didn't anticipate that Byzantium itself could pose a threat to me in the future.

Nevertheless, the Developers have included a few tips that will help you determine what you want to achieve at a given moment. The first is a system of decisions that can have a significant impact on your kingdom. Some of them, however, require certain conditions to be met, which will not necessarily be an easy task. Another solution that will help you plan out your future goals for the playthrough are special map modes. These allow you to check which lands in your area you can potentially unite, creating a new political organism. If your ambition is to build a medieval empire, this is the path you need to follow. You can read more about the decision system in the chapter on kingdom management, while the map modes are discussed later in this chapter.

These are not the only elements of the game that can inspire you when choosing the main objective of your playthrough. Remember that Crusaders Kings 3 is in fact a medieval sandbox game and just like in other sandboxes, you have the freedom to choose what to do.