This page contains information on two additional, well hidden, stages in Crash Bandicoot 3: Warped. The game does not inform you, in any way, about the possibility of playing them, which makes them easy to miss. Unlocking them is slightly less time-consuming than unlocking those in the basement (26-30), but also in here, you will be required to obtain relics for winning time trials. 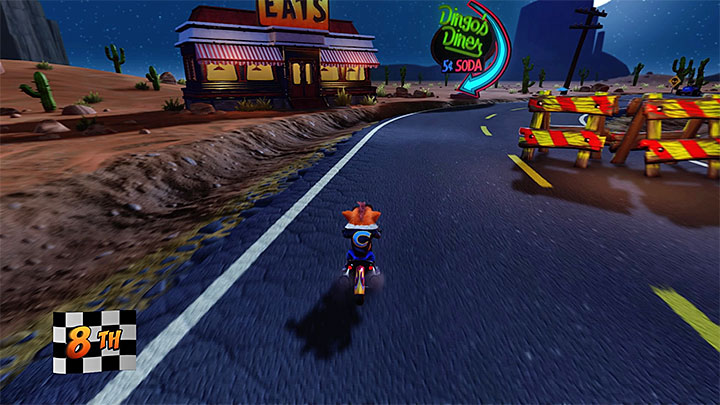 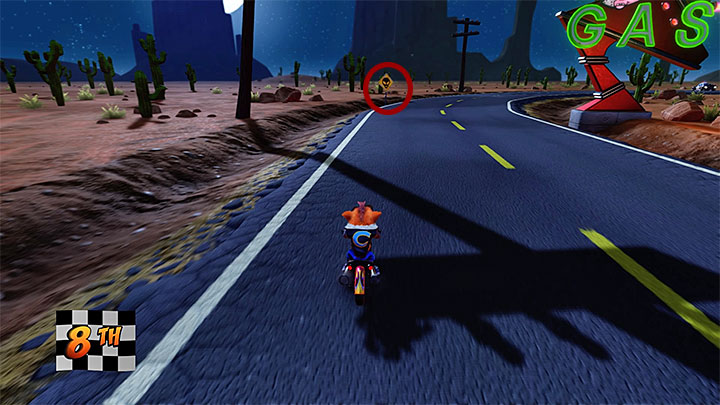 You can find the portal to Hot Coco in the fourteenth Road Crash mission, i.e. one of the oriental ones. Just to remind you, in Road Crash, you take part in a motorcycle race. After the race starts, ignore the opponents and ride at a moderate speed. Head down the main road until you pass by Dingo's Diner restaurant shown in screenshot 1.

From now on, keep to the left side of the road and keep an eye out for the road sign with an alien on it, shown in screenshot 2. You have to bump into the sign, so veer off the asphalt road. The collision will activate the portal to Hot Coco and you will receive a trophy: UFO Xing. 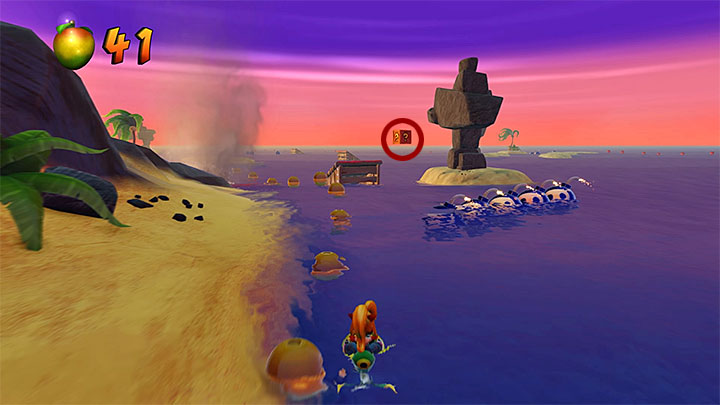 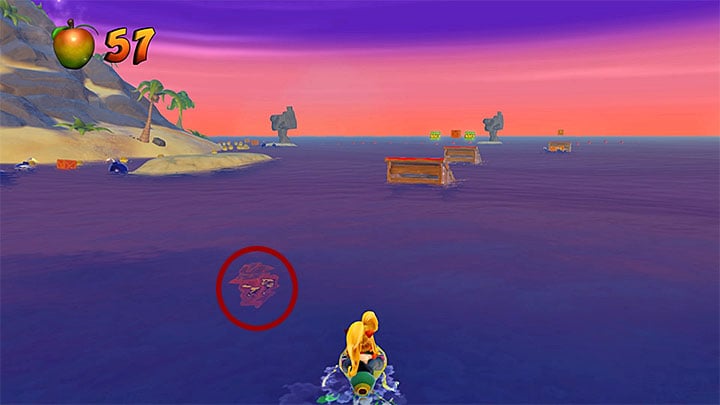 In Hot Coco, you ride a jet ski and unlike in the rest of stages of this type, you do not have to follow any specific route. Instead, you can explore the enormous body of water in any way you want. Another thing to know is that the stage ends in its starting point and you finish by smashing a total of 70 crates.

Unfortunately, it is very difficult to reach the crates, because some of them are placed VERY close to black bombs. Whenever you want to smash such a crate, move slowly. Below, find some useful hints on this stage:

After you have found all of the crates, return to the starting point. You will receive a Clear Gem and leave the secret area. 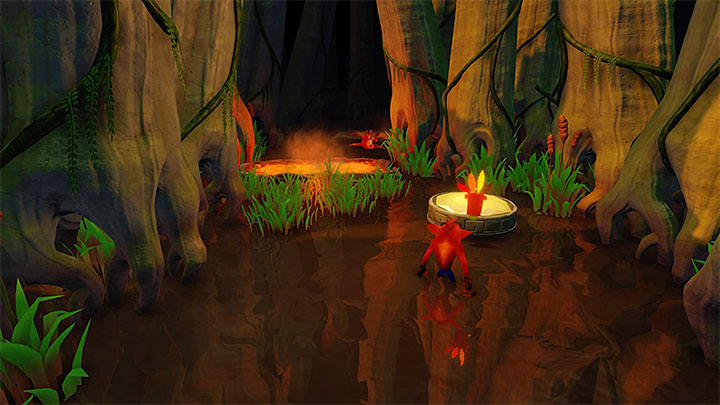 The secret portal to Eggipus Rex is in the eleventh mission (Dino Might!), i.e. one of the oriental ones. BEFORE you try to find the secret portal, you have to find the Yellow Gem, i.e. obtain any 10 relics and in the basement, enter the portal to the secret part of Hang 'Em High (for more information, see the description of this stage).

After you have obtained the Yellow Gem, start mission Dino Might! and cross the swamps to reach the yellow platform shown in the above screenshot. Using the platform will take you into a new location. 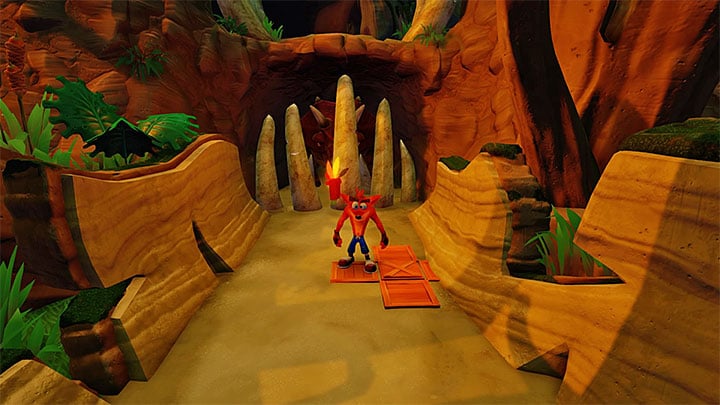 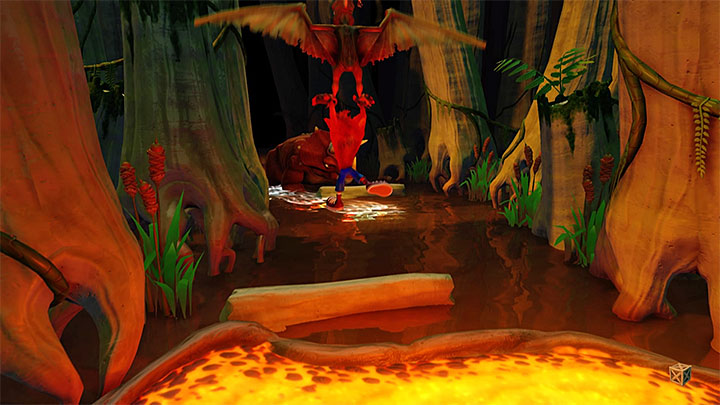 Follow the yellow road and you will reach the area shown in screenshot 1, where you start escaping from a triceratops.

After the chase starts, wait until you climb onto the log on the left shown in screenshot 2, where a pterodactyl was resting (the second log during this chase). You have to jump and grab the pterodactyl in mid-air. If you have managed to do that, you will receive a trophy: Getting Carried Away and Eggipus Rex mission will start in a moment. If you have missed the pterodactyl, die in any way (e.g. by jumping into lava) to replay the chase. 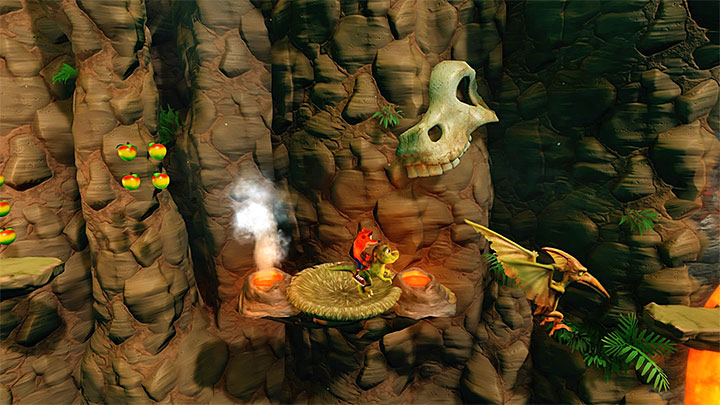 In itself, Eggipus Rex is not too difficult a stage. You play it entirely on the back of a small dinosaur. Depending on the situation, you will have to move left/right and take long jumps (hold down X) towards stone ledges.

Along your path, you will, of course, have to make sure that you do not drop into the pit. Additional obstacles are pterodactyls (avoid them, whenever possible; they only move vertically) and activating mini-volcanoes an example ledge with two volcanoes has been shown in the above screenshot). You can find most of these towards the end of this stage and you have to take several, well-distanced. jumps. Fortunately, this stage is not too long and you can easily replay it without losing too much time.