Note - Before you start this stage, try to obtain all of the color gems from previous missions. Only then, will you be able to unlock all of the secret areas and reach one of the clear gems.

Note - It is best to complete this stage twice. The first time around, ignore the blue plate to the first of the five secret paths. Instead, find all the crates. While playing for the second time, reach the blue platform and complete all of the five secret locations. The alternative portal ending the mission can be found right after you have obtained the clear gem in the last, fifth, location.

This stage resembles Fight Night in Crash Bandicoot 2, because it has you use glowworms to your aid, while exploring darks corridors. The handicap is, of course, the fact that glowworms fly away after some time an d this is why you should hurry to reach successive locations. In itself, reaching the end of the main path is not too difficult, bu7t destroying all of the crates along your path forces you to hurry and familiarize the stage, in case it is necessary to travel in complete darkness for some time. 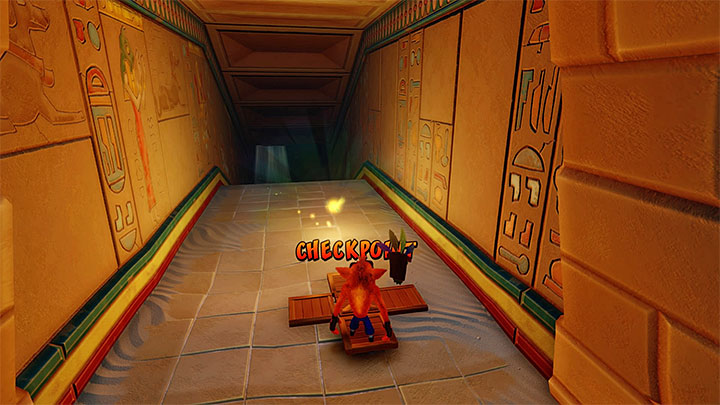 Follow the main path and eliminate cobras along your path. Watch out for alligators appearing from several holes. After you get near the tomb entrance, jump carefully over the plates with scarabs, because they drop down soon afterwards.

In the location shown in the above screenshot, there is the first swarm of glowworms. Approaching them will cause them to follow you and light up dark locations. However, you have to hurry at all times, because glowworms remain by you only for a limited time and fly away afterwards. If you do not make it into another swarm of glowworms by then, you will have to grope your way and, because there are many pits and opponents here, this virtually equals death. 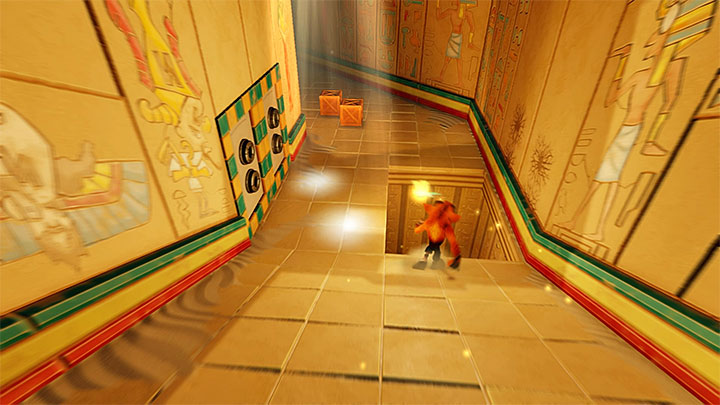 Of course, try to smash as many crates as you can, but do not stop for longer, e.g. to collect apples from the crates. Additionally, right after you enter the tomb, jump over the small pit shown in the above screenshot to avoid lit spots that activate wall traps. In the next corridor, take a double jump to get around the mummy with spikes.

Near another swarm of glowworms, there are closing stone blocks. Do not approach the swarm, until the stones come together (do not wait until they come apart again). Right past this trap, there are 8 regular crates and try to use tornado to smash them as quickly as possible. Jump onto one of the plates with scarab and jump off just as quickly. While climbing the stairs, watch out for the sarcophagus with mummy and more stone blocks. 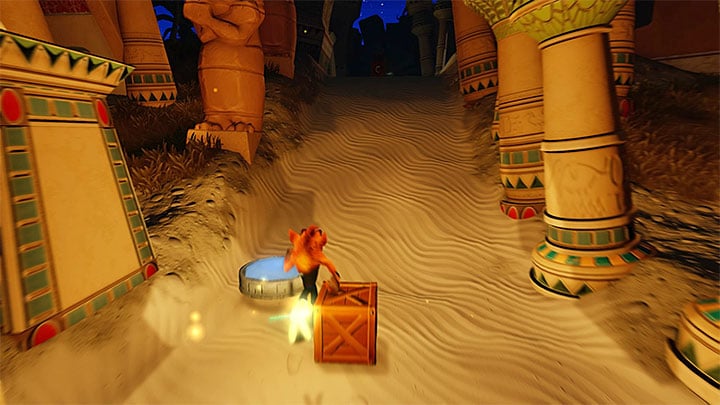 Soon after you get past the blocks, you will reach the plate shown in the above screenshot, thanks to which you will travel to the first secret location. It will be available only if you have blue gem on you. In total, there are 5 secret areas to explore and you reach them in a specific order. In the secret locations, you will encounter:

Note! To avoid dying in the secret locations, you can use Aku Aku masks. A bit ahead, on the main path, you will find three of them and they will make you temporarily invincible. After you have collected them, you can return to the blue platform and dodge the projectiles from walls in the blue location. 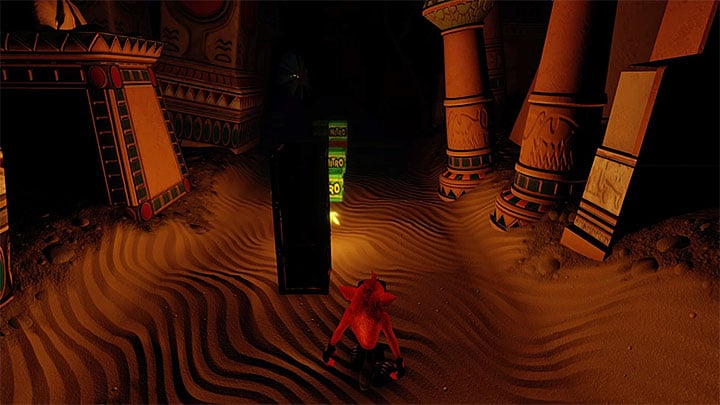 Right after you go past the blue platform on the main path, you will reach a stack of crates shown in the above screenshot. In each one of the crates, there is an Aku Aku mask and destroying them all will make you invincible.

Use the fact that you cannot die now and start running. Slam into green crates with nitroglycerine and opponents. You only have to watch out for pits and the bridge of plates with scarabs, because you will die after you drop into the pit, even if you have the masks. Later on, destroy the stack of regular and reinforced crates. 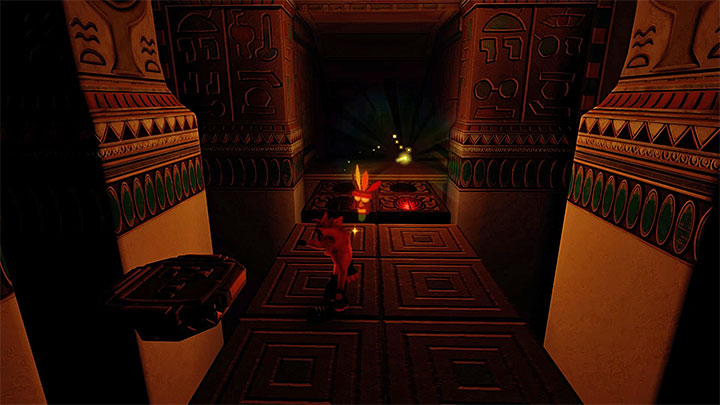 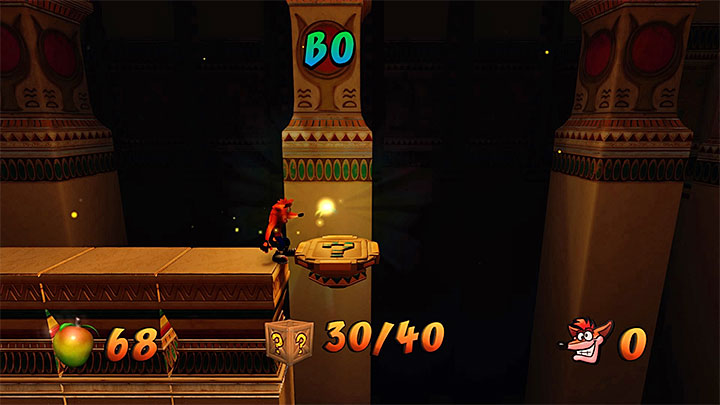 Right past one of the checkpoints, you will encounter a plate with question mark shown in screenshot 1. It will take you to a bonus round with as many as 40 crates to smash. Unfortunately, also in the bonus round, you will have to deal with dark areas and glowworms.

Smash quickly regular crates (you can jump and slam your body into largest stacks) and hit crates with exclamation marks to unlock bridges. You are nearly sure to fail to smash all of the crates, before it gets dark. Therefore, ignore the more problematic crates and try to reach the finishing line as quickly as possible. There, you will find a swarm of glowworms shown in screenshot 2. After you walk into the swarm, return to the crates that you have just missed. In the case of the ones hanging up above, it is a good idea to use the bazooka.

After you return to the main part of the tomb, head on. Watch your step in the corridor with lit points and a mummy. It is best to dash across the location while keeping to the right wall. After you pass by closing stone blocks, collect the violet gem. The remaining part of the stage is not that difficult anymore. Get around the mummy, eliminate cobras and do not touch any of the green crates. Before you leave this stage, hit the last crate with the exclamation mark (it will blow up the green crates you have missed).