This is one of the Arab stages. Using the bazooka will make it easier to avoid many of the traps and opponents that you run into here. On the other hand, you will have to try hard to reach the spot where you unlock the Death Route and complete it flawlessly to obtain the gem. 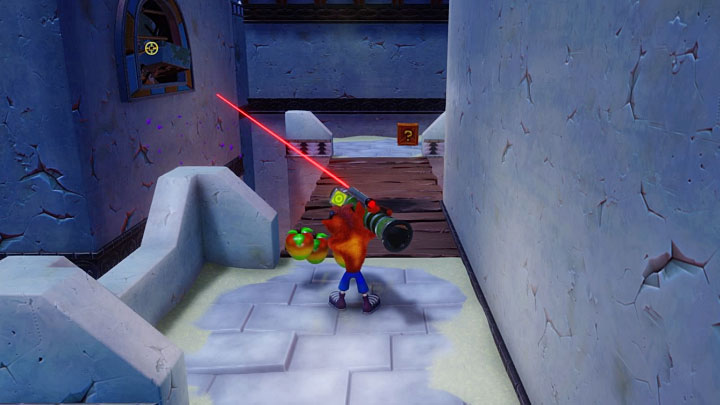 After the stage starts, jump onto the neighboring roof. It is a good idea to use the bazooka throughout the entire mission (however, do not do that if are playing time trial to obtain the relic). Thanks to this, you will be able to eliminate opponents with ease. Use bazooka to eliminate the two opponents with sabers, at the beginning of the stage, and the opponent throwing jugs with a flammable substance, from the window (wait for him to appear in the window and fire at him several times -shown in the above screenshot).

Move on and jump over the flying carpet. Also here, you can kill the opponent with the bazooka (or double-jump to the right to avoid flames). After you reach the corner, go towards the background. Fire at the monkey throwing jugs, from a distance and only then, jump onto one of the carpets to reach the area where the monkey used to be . There, you will find a checkpoint. 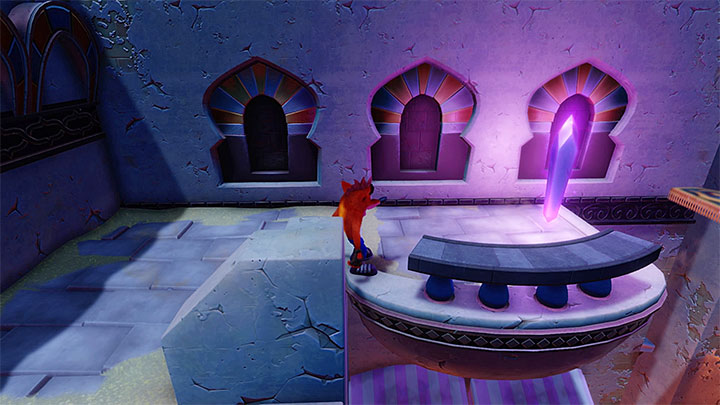 There are three dark marks on the ground, which suggests that this is where jugs with flammable substance drop. It is a good idea to eliminate opponents in the neighboring windows, thanks to which you will only have to avoid one fragment of flaming path. Jump onto any of the carpets and again, during the ride, fire at the opponent in the window on the right. Only after you have eliminated him, jump onto the ledge.

After you jump off the crate with arrow, land onto one of TNT explosives. Head on and collect the violet gem (shown in the above screenshot). Jump from carpet to carpet and, after you reach a wooden ledge, jump over the flames, or eliminate the opponent in the nearby window. After you land on the right ledge, touch one of TNT crates and start climbing. While climbing, watch out of the opponents with sabers and spots, where explosive jugs land. You can try and walk around opponents altogether, eliminate them with standard attacks (Spin attacks, slides, jumping onto them) or using the bazooka. 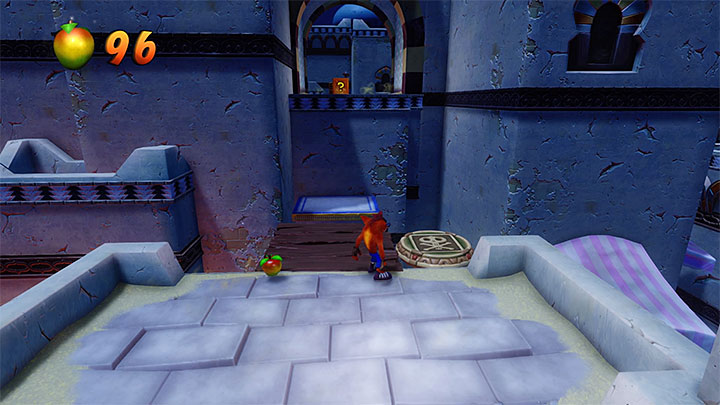 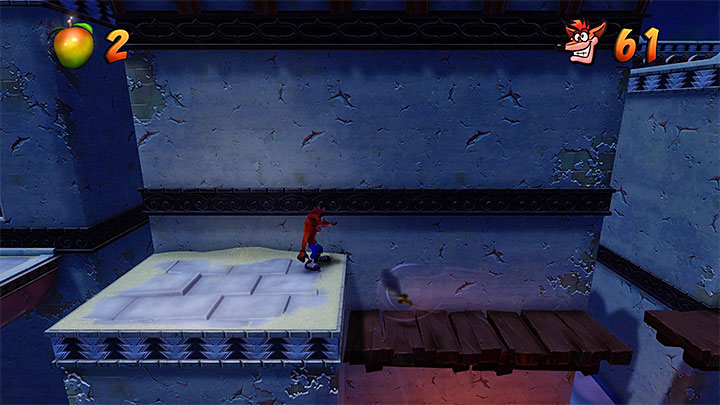 If you have not died yet, on the next roof, apart from crates, you will find a plate with skull shown in screenshot 1 which will take you to the Death Route.

watch your step right after you start the Death Route. In the spot shown in screenshot 2, there is an invisible opponent tossing sabers. Jump down and be prepared to jump over, at least, one saber, while running to the right. It is best to eliminate the opponent by sliding or jumping onto him. 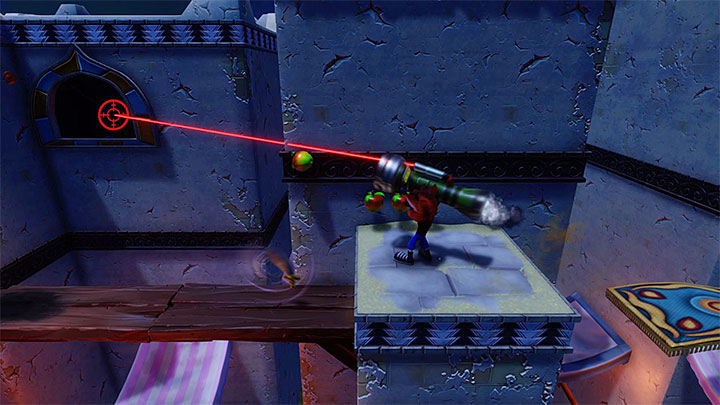 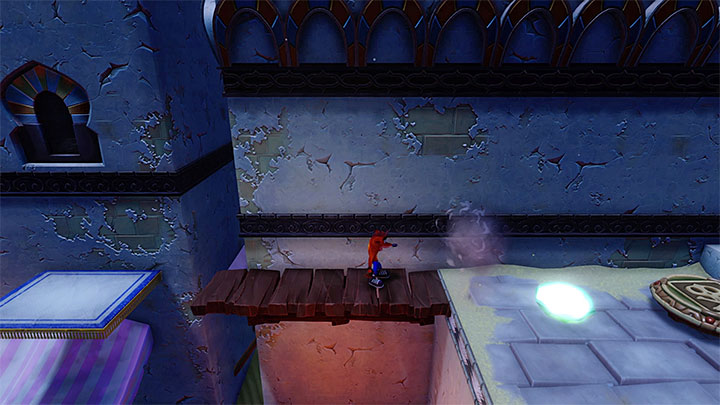 Move on on the Death Route. Before you start bouncing off one of the trampolines, fire bazooka at the two windows on the right. Along your path, you will find a checkpoint, which it is good to unlock, because it is easy to die later on. Another demanding spot is the one shown in screenshot 1. Try to fire at the opponent in the window and wait for one of the sabers to reach you. Head left and, along the way, take a double jump at least once, to avoid another saber.

Fire at the two opponents in windows on the left, around the corner. Go right and dodge the sabers thrown by one of the opponents. It is a good idea to use long jumps here, especially that you will be passing by a trampoline along your path. The green gem is to the right of the last opponent and he has been shown in screenshot 2. Also, there is a plate here thanks to which you will return to the main location.

Note - After you have completed Death Route and returned to the main location, smash first the crates on the right. You do not have to backtrack too much , because the previous crates on the main route have been close to the Death Route starting point. IN theory, you should have dealt with them already, because you probably smashed them before you have gone for the secret location. 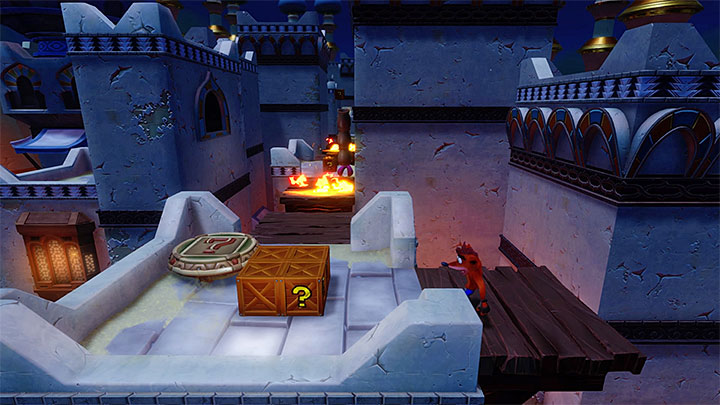 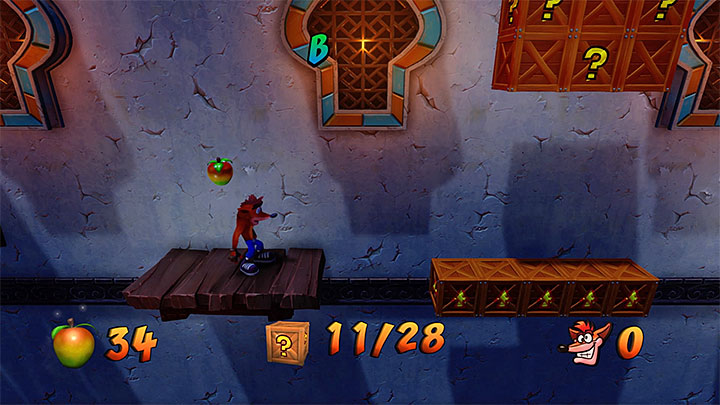 Explore the areas to the left of the point where you have returned from the Death Route. There, use the flying carpet and deal with the opponent with saber (you can fire bazooka at him, while on the carpet). Unlock the checkpoint and head left. In spot shown in screenshot 1, you can start a bonus round.

In the bonus round, you will have to smash 28 crates. At first, use the bazooka to smash all the nitroglycerine crates (first the ones below, then the ones above). In the spot shown in screenshot 2, use the bazooka to smash all of the crates above, then go right and, after you reach the balcony up above, fire at the crates with arrows below. Finally, destroy the three regular crates close to the platform on which you leave the bonus round.

After you return to the main part of the city, fire at the monkey with jugs in the distance and at the opponent in the window on the left. After that, move on. A bit ahead, shoot down the crate high above, avoid flames and jump onto one of the flying carpets. This way, you will reach the portal that ends this mission.