This is the third stage in which you ride a bike. Victory is required to obtain the violet crystal, but fortunately this is not too demanding a task. What is a bit more difficult is smashing all the crates, because it is easy to miss some of them, while playing this stage for the first time. 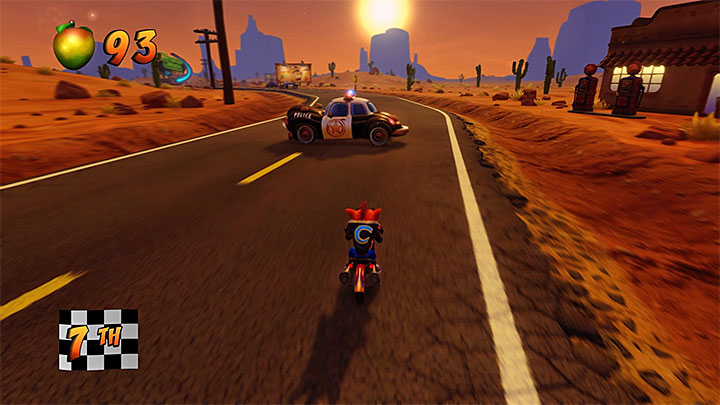 Just like in the previous races, it is a good idea to play this stage at least twice. The first time around, ignore the rest of the contestants and ride slower to find crates. You should especially watch out for the crates suspended high above, as well as for one placed right behind the ramps (do not use a ramp, if there is no crate above it, or a road-wide pit right behind it).

During the race, you will have to watch out for big pits. A new type of obstacle are police cars which, unlike in the previous races, are not parked. Instead, they will be cutting you out, going across the entire width of the road (an example shown in the above screenshot). 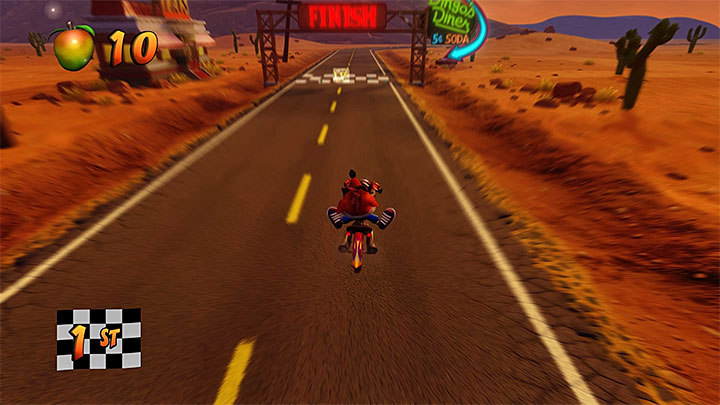 After you have smashed all of the crates and obtained a clear gem, repeat the race and focus on crossing the finishing line first. The race starts at the moment, at which you start accelerating, right before the green light goes on. While racing, watch out for the pits and for police cars (fortunately, they will also be knocking your opponents off the road).

During the race, keep an eye out for green pressure plates that grant you boost. Some of them are placed within close proximity of the ramps, so ride onto ramps only if you have to jump over a pit. Of course, the most green plates are close to the finishing line. Fortunately, if you miss most of them, you should be able to make it anyways, way ahead of your opponents.