Note - Before you start this stage, consider completing Flaming Passion first (it is also one of the locations in the futuristic room with portals). Thanks to this, you will obtain the green gem that you need to obtain clear gems.

This is the second stage in the futuristic city. It is more difficult than the first one, but the higher difficulty level results from the higher level of complication of finding all the crates. To smash some of them, you will require the bazooka you have just obtained. Apart from that, you will also have to complete the secret path, if you want to obtain both clear gems. 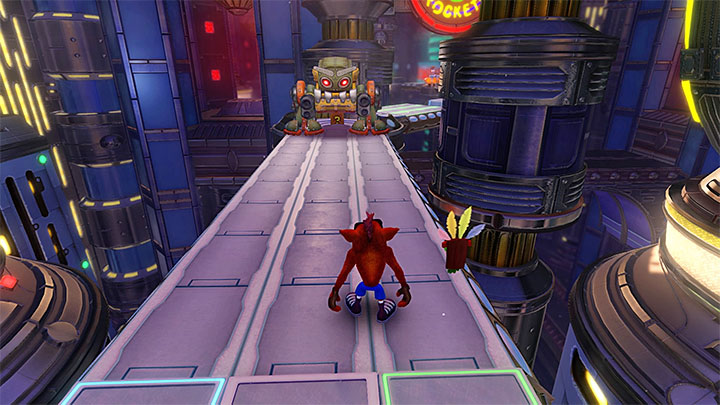 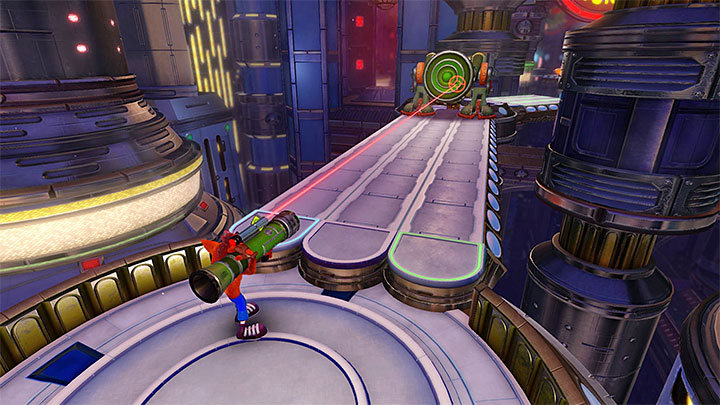 Start exploration of the city. You can eliminate all the opponents in the more oldschool ways (jumping on them, Spin-attacking them), or you can fire your bazooka at them (for that, you have to stop and target them). You will have to use the bazooka to deal with machines just like the one shown in screenshot 1. After you stand on the conveyor belt, the machine will fire three rockets. Backtrack quickly and stand slightly on the side, to avoid taking damage from a rocket (fortunately, in the nearby crate, there is an Aku Aku mask, which will save you from death, should you make a mistake).

Aim the bazooka (L2) and use either the analog stick, or the d-pad to move the crosshair in the direction of the machine. Fire (Circle) only after a target is displayed (screenshot 2). If you run out of time for all of these action, step onto the conveyor belt for a moment, thanks to which the machine will fire at you again, thanks to which you will be able to attack it.

Note - If you are in a hurry, you can try and jump next to the machines. In such situations, you will have to dodge from rockets, as you go and take a double jump over the pit. 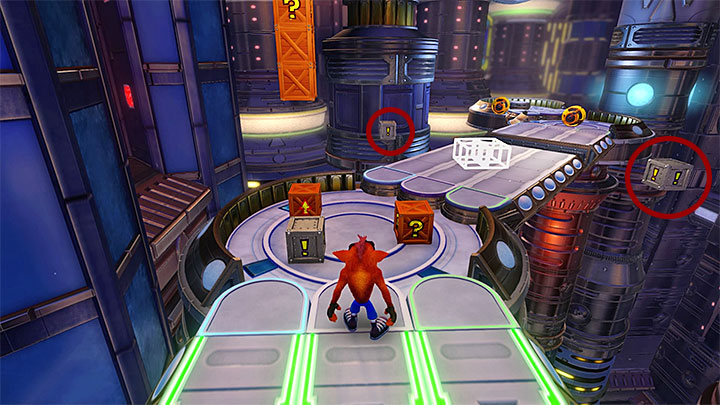 Soon after you have passed by the two scientists in pods, you will reach another rocket-firing walker. You eliminate it in the same way you did the previous one - fire your bazooka after it uses its shield. Move on and watch out for the energy beams. Wait for a good moment to move on the neighboring ledge.

Move on and ignore crate frames that you cannot yet smash. Reach one of the platforms ahead, where there is the first metal crate with the exclamation mark. Hit it and use the bazooka afterwards, to reach the two crates on the sides, shown in the above. After that, return to the previous location and smash the newly-unlocked crates. Once again, go into the location with the first crate with the exclamation mark. Jump several times off the crate, but do not smash it, because the top crate is still a frame (you can return here later on).

After that, go towards the platform that will take you to a completely new part of the city. 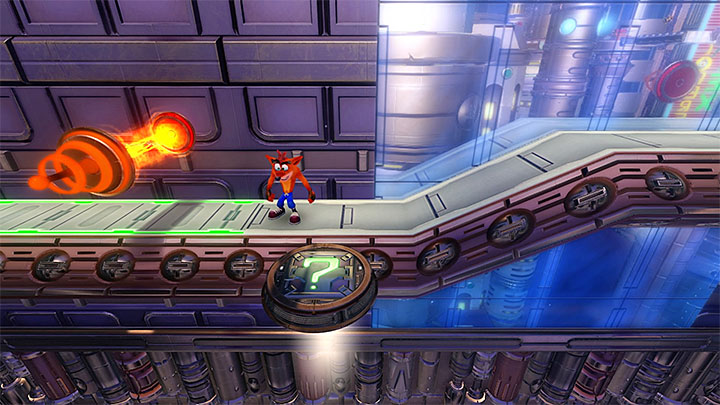 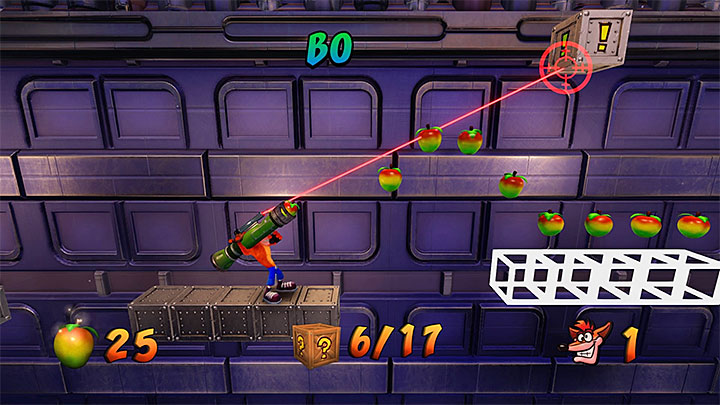 In this location, go right and collect the violet gem. Along your path, watch out for the robots, extending spikes and energy beams, but these are not too problematic. Smash all the crates in the first bunch, but ignore the second one for now, i.e. the one with frame0crates under the metal platform.

Soon you will reach a pressure plate with the question mark shown in screenshot 1, which will take you to the bonus round. In the bonus round, start by blowing up the TNT crate, which will activate the exclamation mark underneath. Along your path, you will have to use the bazooka to fire at the green crate and the crate with the exclamation mark shown in screenshot 2. Jump onto the new ledge and aim the bazooka at the bunch of nitroglycerine crates on the right. After you have exploded them, head towards the area with four regular crates. This way, you will complete the bonus stage. 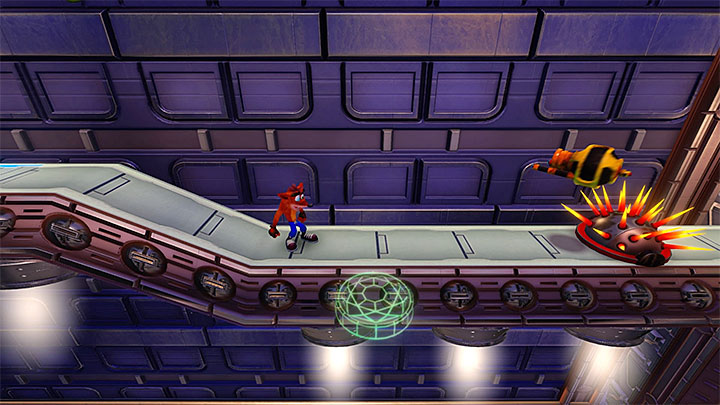 After you return to the main part of the stage, go right and remember do smash all of the crates suspended high above. If you have obtained the green gem in Flaming Passion (for completing the Death Route), in the location shown in the above screenshot, you will be able to warp to a secret location. Start exploring the location and watch out for the energy beams appearing on the green conveyor belt.

A bit ahead, eliminate a walker (do not attempt to jump over it, because there is a small pit between it and you. Move on. You will find the clear gem in a moment. After you have collected it, head up, hit the crate with the exclamation mark and stand on the green platform to leave the secret area.

The green platform will take you to the location, where there is the first missing frame crate. You can now jump off the crate with arrow and perform a Spin attack in mid-air. The second bunch of frame crates is the one under the metal bridge that you have ignored while going right (soon before the bonus round). Touch the TNT crate above to start countdown and destroy them. 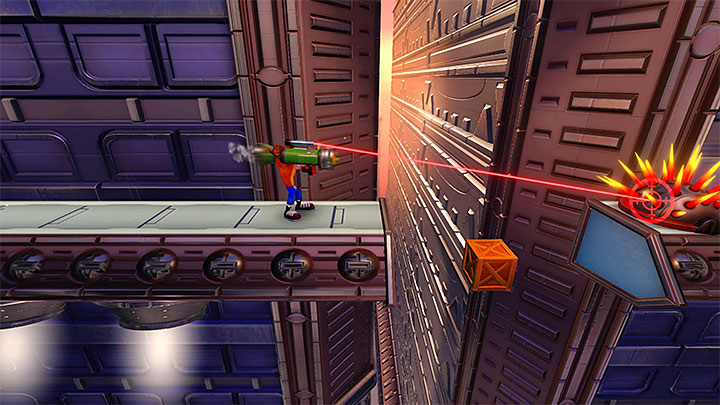 Explore now the area to the right of where you have started the secret location. Especially, you should watch out here for the single crate hanging above the pit, shown in the above screenshot. You can destroy it with bazooka and take a long jump aided with tornado, or jump onto it and jump off by double jumping off it. In both cases, first eliminate the spikes to the right, which will ensure safe landing. Reach a new platform and wait for it to take you to another location.

In this location, you will be heading towards the background again. Watch out for several devices generating energy beams, because you will have less time to get around them (eliminate the flying scientist using bazooka). In the next part, get around or destroy a walker. Right past the walker, there is a portal that ends this stage.