Note - You will not obtain any clear gem while playing this stage for the first time. First of all, it is necessary to obtain 20 relics from time trials in any other stages. This will activate the orange platform in the area, where you select stages, thanks to which you will go down to the basement. There, you will wind a portal to the secret part of the Future Frenzy stage. Exploring it will reward you with a clear gem and will allow you to smash some of the crates required by the second clear gem. To learn more, see the bottom of this page.

This is the first futuristic stage of the game. The majority of its main locations should not be a problem for you. What is more difficult is the secret path and, to unlock it, you have to obtain in the entire game, at least, 20 relics that you receive from time trials. 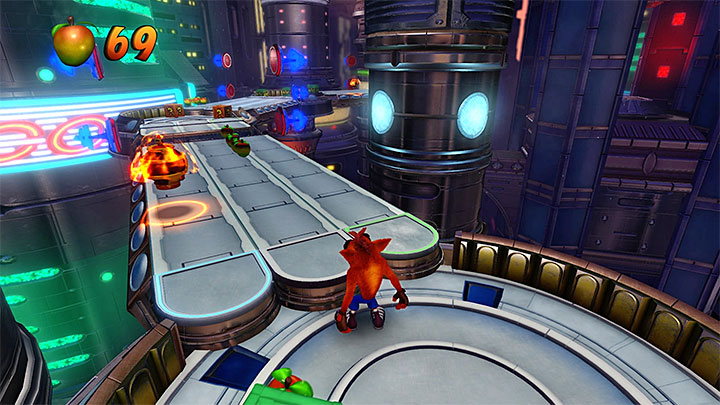 watch out for the first trap with energy beams, which starts next to the starting point. Fortunately, you only have to wait for the right moment to cross it. Another innovation are the green conveyor belts (jump over the first one to smash the crates suspended above). In themselves, these are not traps, but often they spin towards a pit or some trap. Whenever this is the case, escape to avoid getting into the trap.

Soon you will encounter the first robot shown in the above screenshot. You can eliminate robots, but you have to do that when they are not surrounded with a force field. Follow the path and watch out after you land on the blue conveyor belt, because these make you go back. The best way to travel over them is by taking frequent double jumps. 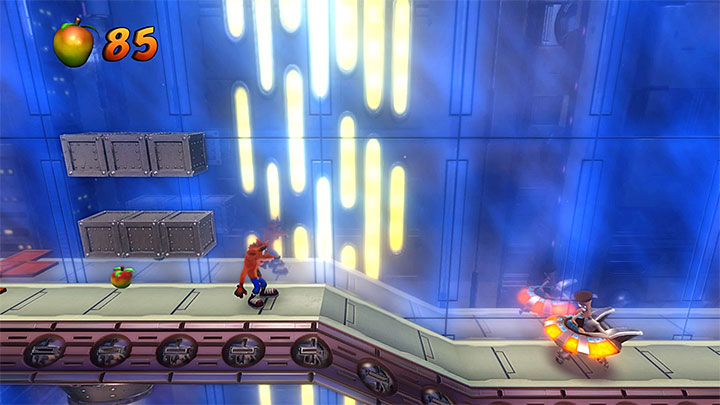 Carefully, get around the crates with nitroglycerine and move on. After you get onto a stable ledge, perform a body slam to smash the reinforced crates. Soon, you will reach a small platform that will take you to a different part of the map.

In this part, you have to run right. Starting from here, you gave to watch out for the scientists traveling in pods (shown in the above screenshot). Some of them are hovering low by the ground, whereas others are higher up. In both cases, jump onto them (with single or double jumps). Along your path, also watch out for energy beams - jump over them or slide underneath. 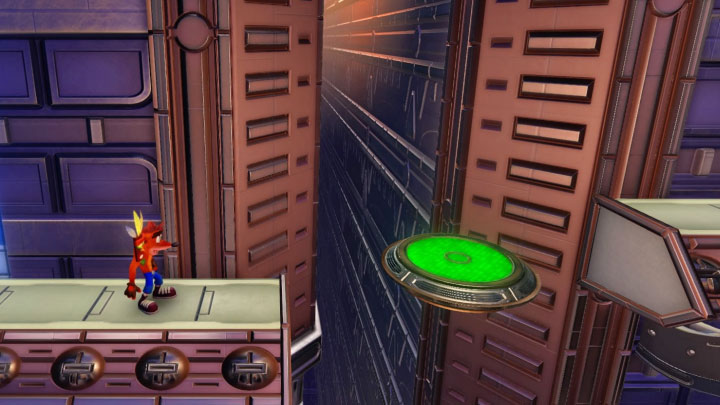 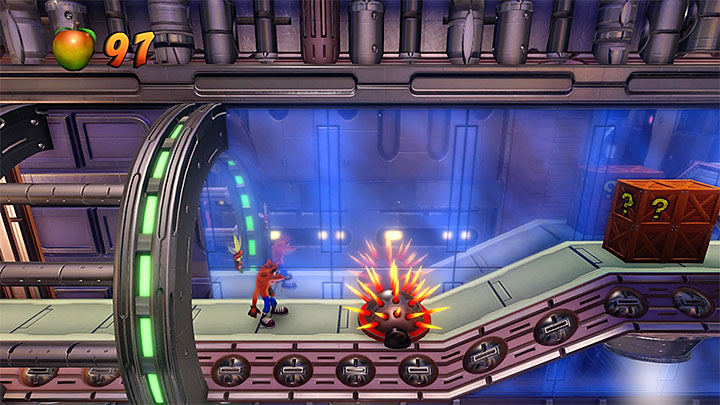 In some spots, you will run into floating platforms, like the one shown in screenshot 1. Jump onto them when they glow green and jump off as soon as they start to blink red. First, you will run into one such platforms, but later on, they will be coming in twos, which is when you have to time your jumps.

Another new trap are extending spikes, similar to those shown in screenshot 2. Double-jump over them to avoid them altogether, or wait for the dome to close (you can then jump onto it to eliminate the trap).

Go right and watch your steps where you have to run over conveyor belts and destroy robots. Soon, you will reach an elevator that will take you to the next part of the stage. 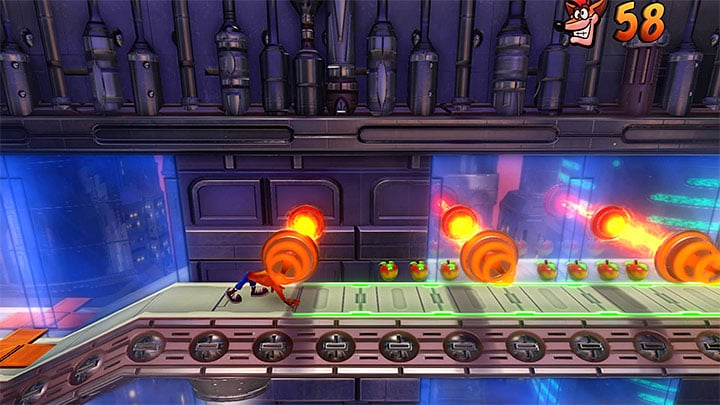 Right after you get to the new part of the stage, note the crates suspended high above, which you can reach by double-jumping or by jumping off a shut dome. Soon you will run into some TNT crates and you can jump onto any of them. The important thing is to get away quickly.

The fragment shown in the above screenshot is a bit more demanding. Do not try to jump and slide instead and remain in the crouching position to avoid all of the energy beams. Right afterwards, you will find a violet crystal. Carefully, get around the small stack of crates and smash only the top one, because there is nitroglycerine in the bottom one. Reach the next lift. 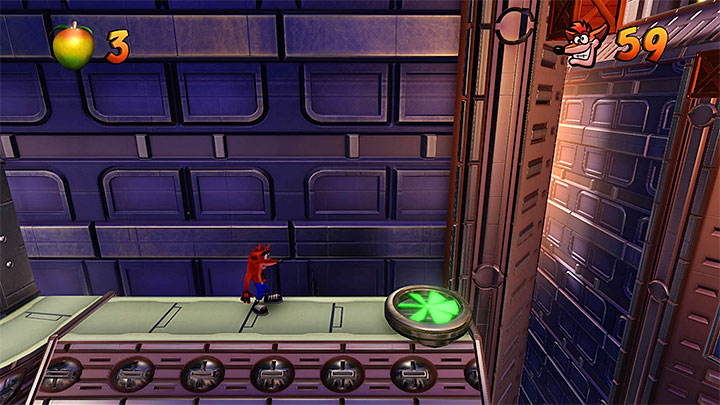 In the last part of this stage, you should especially watch out in the location shown in the above screenshot. You have to stand on the active fan here. After you are launched into the air, start tapping Square quickly to start gliding right and, at the same time, smash all the hanging regular crates.

Head right and, after you reach a small pit, jump off the scientist in a pod (you could also try a double jump and a tornado). The last thing to do is hit the crate with the exclamation mark and cross the ending portal.

How to use the secret passage: 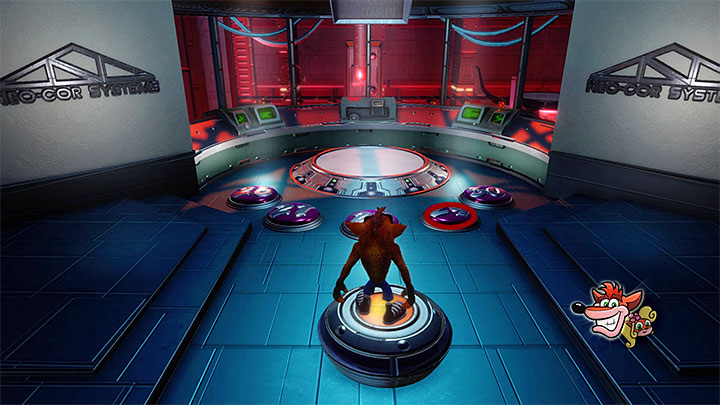 It has been already mentioned that you cannot obtain any of the Clear Gems while playing Future Frenzy for the first time. This becomes available only after you have met certain conditions:

After you cross the portal, start exploration of this area. You can use the bazooka to destroy crates, obstacles and opponents at a distance. Watch out in the parts where there are many green nitroglycerine crates, as well as two other parts where you are to jump over two spinning platforms (if necessary, you can fly over one of them and use tornado and gliding). At the very end of the path, there is the first Clear Gem and a portal to the main part of the city of the future. After you have returned to the main part of the stage, you cannot go right straightaway, because you would miss some of the crates this way. First, go left and smash the crates.

Note - while exploring the main part of Future Frenzy for the second time, you will encounter some of the traps, opponents and crates in different locations. Also, the bonus round, where you have to smash 19 crates is more difficult. In the final part of the bonus round, you will have to follow the instructions of the mural, jump off the ledge and start a tornado. While dropping down to the right, you will smash some of the crates in mid-air and you will safely reach the right ledge.