This is yet another stage that takes place on water and which assumes that you use a water jet. There are several new handicaps here, but for the majority of time, you will be avoiding black bombs that you are already familiar with. 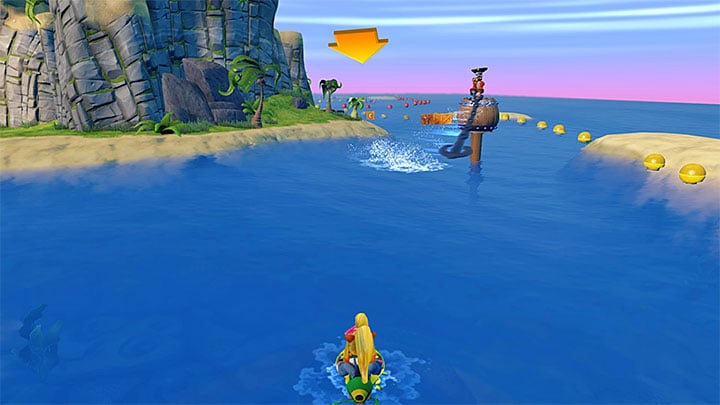 From the very beginning, try to smash all the crates you pass by (to get some of them you will have to use a ramp)m because there are more than sixty of them here. The first more difficult part of this stage assumes that you steer around an enemy ship that fires projectiles. Try to remember the order in which cannons are fired, to know when it is safe to move on.

Steer left, around the first isle that you encounter, because there crates to smash there. A new type of threat here are sailors, like the one shown in the above screenshot. They rotate with a submerged anchor. Try to keep a safe distance while passing them by, or follow the trail of the anchor, after it passes by Coco (sailors spin in a counterclockwise direction). 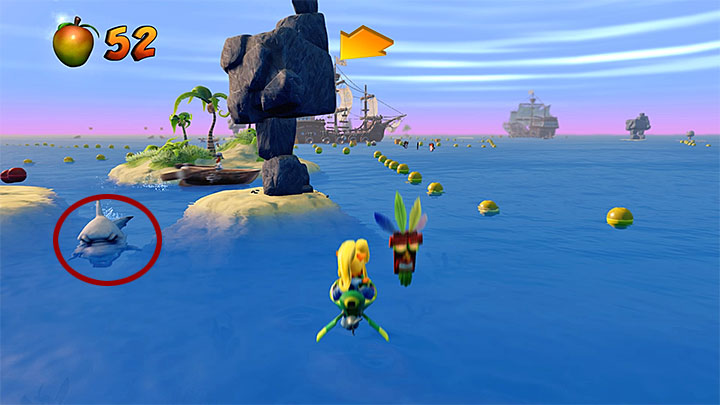 Move on and make sure that you have collected an Aku Aku mask from one of the crates. Thanks to this, you will make sure that you survive, in case of a minor misstep. Another new type of threat are sharks similar to the one shown in the above screenshot. Since you cannot attack them, steer away from the areas that they patrol.

Steer around one of the smaller islands up ahead, because there are several crates in small quays (at the same time, watch out for other boats skirting the isle). 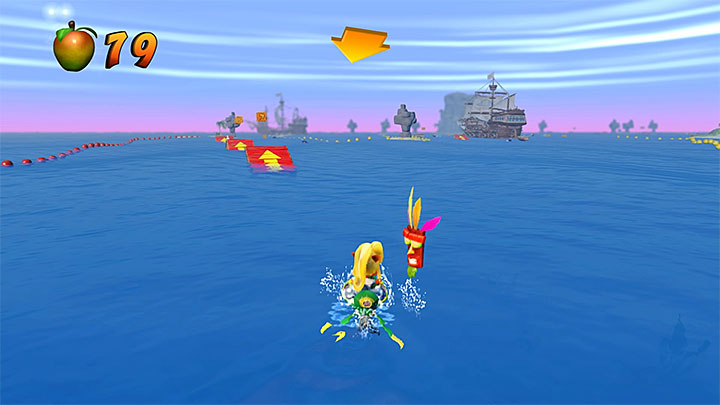 Follow the route and you will soon reach a bigger reservoir shown in the above screenshot. You have to explore it carefully, if you want to get all the crates. Start by using all the ramps (Note - you have to turn around, if you want to use one of them). After you have smashed all of the crates, head towards the ship moored to the right of the starting point. Avoid gunfire there and reach crates (there also is a ramp there).

After you have cleared the area, explore the area to the left of the starting point. The area will soon be narrowed and this should make it easier for you to find all of the crates. Carefully, steer around the boat and smash 3 more crates, while avoiding gunfire. 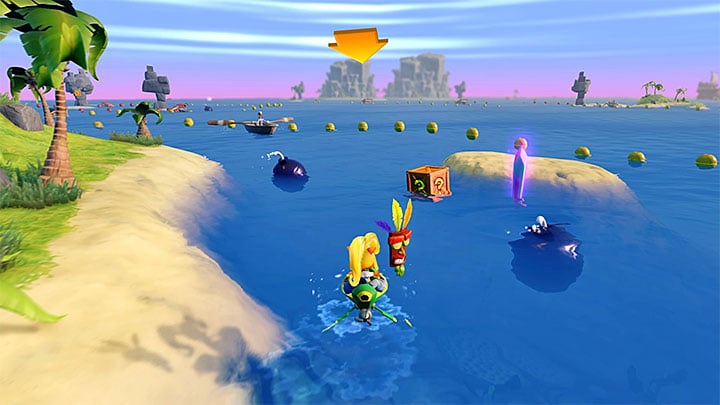 In the next part of this stage, you should watch out for a sailor with anchor again. Approach the violet crystal near one of the black bombs (shown in the above screenshot). In the next area, steer towards ramps and stop right after you go into the air, because there are two bombs next to each one of the ramps.

IN the final part of the stage, you have to take a sharp right turn. Do not move left too far here, or you will touch a bomb. Finally, head towards the ramp surrounded with bombs. Jump on the ramp (you will grab and extra life in mid-air) and use the portal ending this stage.