Note - Before you start this level, consider playing Tomb Wader first (also a part of the portals in the Egyptian warp room). This will allow you to obtain the Blue Gem that you need to obtain Clear gems.

This level takes place in a tomb, where you find quite a few new unpleasant surprises that can make you die quickly. Also, obtaining all of the crates and clear gems poses a problem, because you first have to explore the discernibly more difficult locations first and it is even easier to die there. 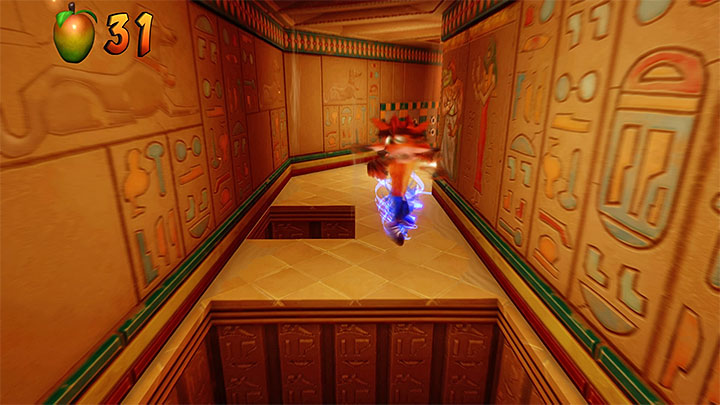 After the level starts, run down the screen and smash four crates, where there is a crate with an extra life. Then, reach the fork. The path to the left is more difficult, but you will have to go there anyways, if you want to smash all the crates. It is recommended to take the right path, if you want to complete this stage as quickly as possible. Both of the paths lead towards the end of the stage and they converge later on. It is going to be easier for you to reach all of the crates, if you explore the left path first and then turn along the right one to smash all of the remaining crates.

The left path requires you to reach the other side of a large chasm and, for the first time, you will have to use the Death Tornado Spin ability, which you obtain after defeating the last boss. Take a double jump towards the chasm and, in the top point of the jump, start tapping Square. Crash will turn into a tornado and will gradually drop (shown in the above screenshot). Use all these abilities to fly towards the ledge in the distance. You will land on it safely only if you have activated the tornado at the right moment, so do not worry if you fail for the first several times. 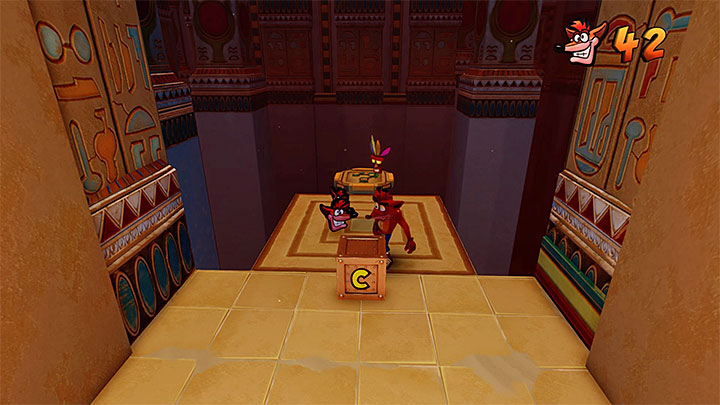 In the next corridor, watch out for the lit points on the ground which activate traps, and for green crates with nitroglycerine. Get around the hopping sarcophagus (or smash it and eliminate the mummy behind it) and approach carefully the cluster of jugs with a monkey among them. Avoid the object that it throws and smash all the jugs to eliminate the threat.

Walk over the slippery floor and reach the pressure plate. Right after you press it, start jumping over the plates with scarabs which drop quickly. Eventually, you will reach the location shown in the above screenshot. Here, you will find a checkpoint, as many as four extra lives and a moving platform. This will take you to the right. 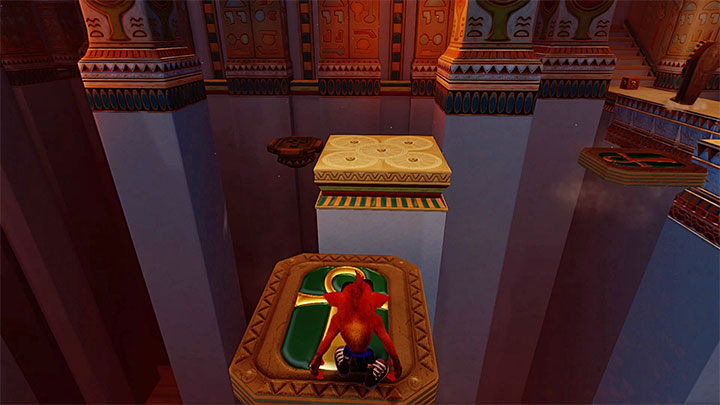 The ride ends on the ledge with spikes. You can walk over it at the moment, at which the spikes are fully extended, but you have to watch out for situations in which they will be extending from the ground. Now you will have to explore the right path that you have skipped. Jump onto the moving platform below, shown in the above screenshot. Start moving down the screen, watch out for the closing stone blocks, the opponent with flame thrower and a new sarcophagus. Smash all of the regular crates that you run into (Note - one of them is a TNT crate).

After you have smashed all of the crates on the right path, return to the platform with spikes, which is where both of the paths converge. This time, jump onto the platform on the right, thanks to which you will be able to explore the rest of the tomb. 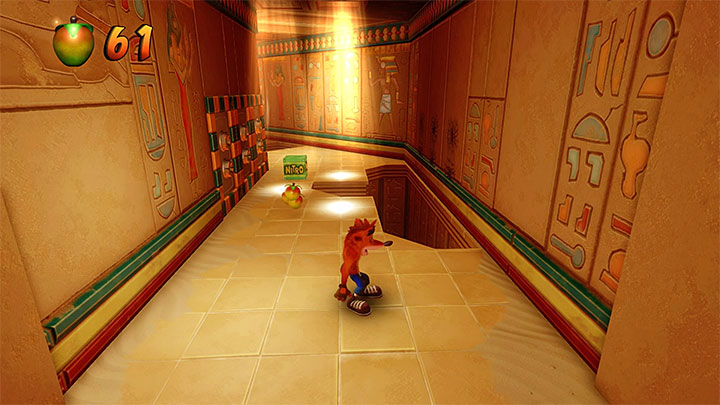 Along your path, get around the sarcophagus with a mummy and follow the path. At the top of the stairs, there is a trap with closing stone blocks. Do not let yourself be crushed. You will run into even greater trouble in the next corridor (shown in the above screenshot), because there are lit spots and crates with nitroglycerine there. You can double-jump and activate tornado here again, thanks to which you will make it over the traps. As an alternative, you can slide and double-jump, but you will have to hurry then, lest you take damage from poison darts.

In the next part, there is a slippery floor with two green crates. Get around them and jump over the moving stone blocks (Note - the first one of them detonates both of the green crates and you have to be away from then when this happens).

Attack the opponent manning the lever and head on. Watch out for the closing stone blocks at the top of the stairs. Around, there are many crates to be found. Watch out for TNT crates and make sure that you smash at least one crate with extra life. 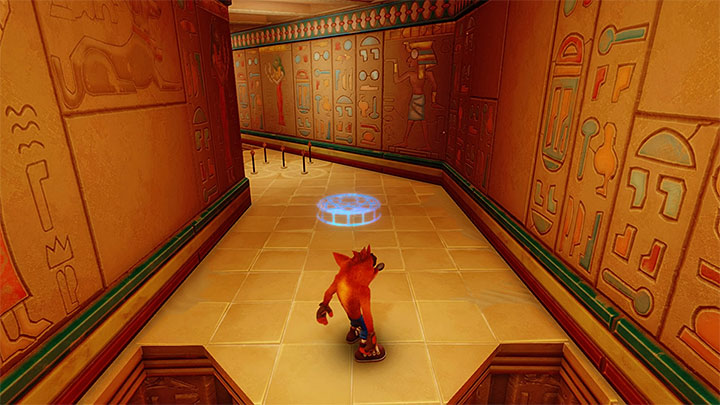 Eventually, you will reach the location shown in the above screenshot. If you have the Green Gem from Tomb Wader (you receive it after you complete Death Route), you can walk onto the blue platform that will warp you to a secret location. Here, you will have to move over slippery surfaces, virtually, at all times, so you have to be extremely careful.

Along your path, you will have to watch out for the lit spots that fire traps in the walls, jugs with monkeys and for closing stone blocks. Only in the latter case, try to slow down and stop right by the blocks. Towards the end of this area, also be prepared to face a cobra guarding the Clear Gem. After you obtain the gem, you could cross the portal and end this part, but it is better to commit a suicide and return to the main part of the mission. You will not lose the gem and you will be able to continue your search for crates to smash. 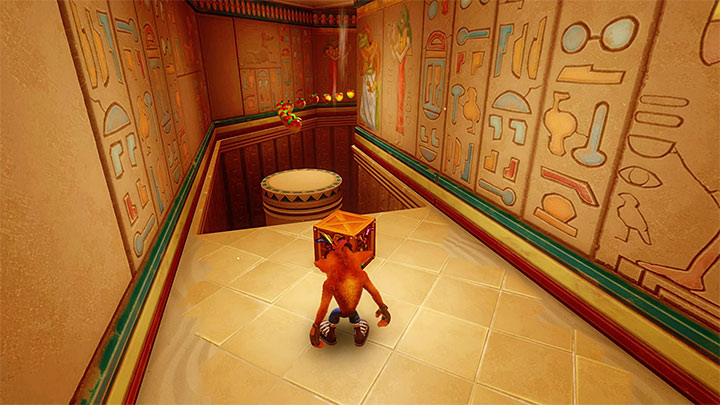 Explore corridors behind the platform warping to the secret location. Watch out here for spikes and a hopping sarcophagus with a mummy. In one of the corridors ahead, you will again have to avoid green crates and stone blocks moving over the slippery surface.

Reach the crate with an Aku Aku mask (shown in the above screenshot) and jump onto the first round platform. You do not have to do anything else, because the platform will start traveling. Along the way, prepare yourself for jumping onto another round platform. In the final part of the ride, take a diagonal jump, to the left or to the right, to avoid an opponent with a flamethrower. 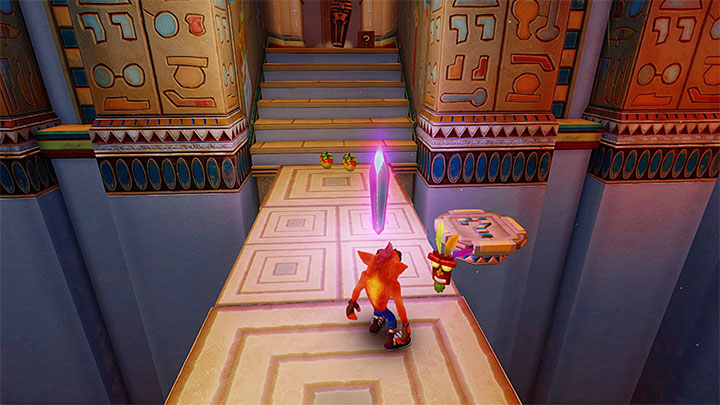 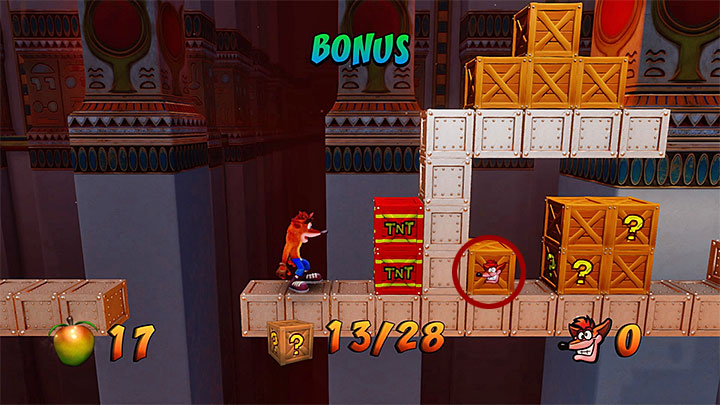 In one of the next areas, there are a violet crystal and a pressure plate traveling to the bonus round starting point (shown in screenshot 1). In the bonus level, first jump onto TNT crates, but also remember to jump towards the crate suspended high above. In one of the next areas, you can take your time before you start the countdown, to have some time to reach the extra life shown in screenshot 2. You can also ignore it and head right. The final 4 crates are a bit more troublesome. Smash, one after another, the ones placed on the TNT crate, until the last one drops down, which will start the countdown.

After you return from the bonus round, get around the mummy and the sarcophagus, or eliminate it and approach a small pit. Jump only after the stones slide apart. Watch out for another monkey in the jars and, just as carefully, start clearing the tall tower of crates. Some of them are TNT crates. Touch to any of them to start the countdown.

Reach yet another corridor with sliding blocks. Get around them and smash the jugs, where there are monkeys. Finally, stand on the pressure plate and, after you get around the blocks, hit the crate with the exclamation mark. You can now return to the portal and end this stage.