This is the third level that takes place in medieval times and is just as easy as the previous two. The only part that is slightly more difficult is the bonus round but you can repeat it as many times as you want, without a risk of losing your health permanently. 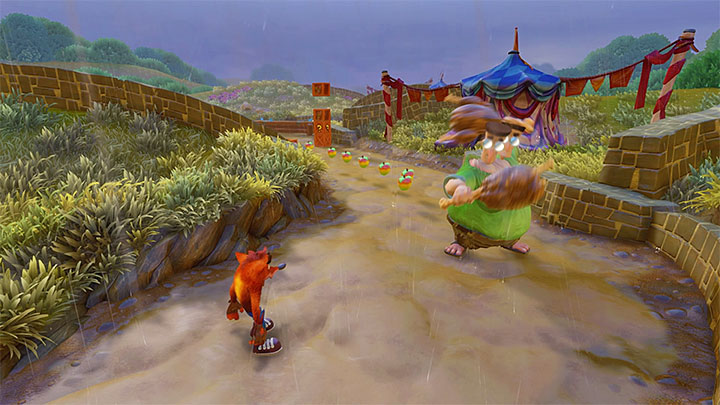 Right after you start the level you come across the first of a few two-headed enemies (the picture above) that swings left and right club alternately. Avoiding this enemy is very simple because the road is very wide. Warning - In some places you can also jump on two-headed giants and eliminate them.

Follow the linear path and while you are doing that you must eliminate enemies and destroy crates. The part in which you must avoid toads surrounded by green nitro crates is a little bit more problematic. Try to jump on toads or push them back in direction that won't cause them to hit nearest green crate.

Avoiding the next giant is a little bit more challenging. Wait until you can quickly jump over a chasm. Continue your journey during which you must eliminate knights that aren't a threat. In one of the next crates you can find an extra life but below and above it there are TNT crates. You can decide whether you want to destroy the crate in the right moment during a jump or simply start a countdown. 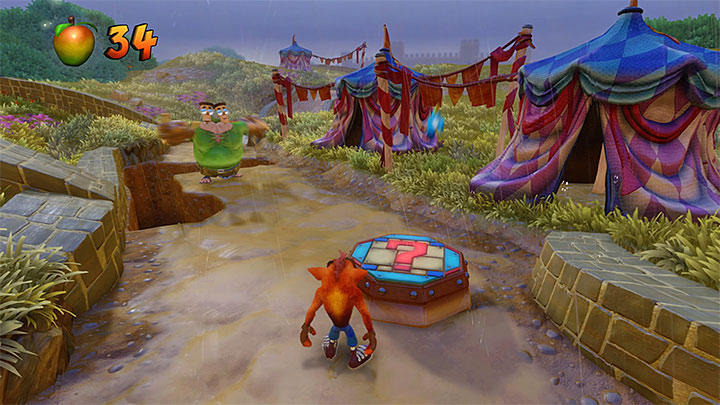 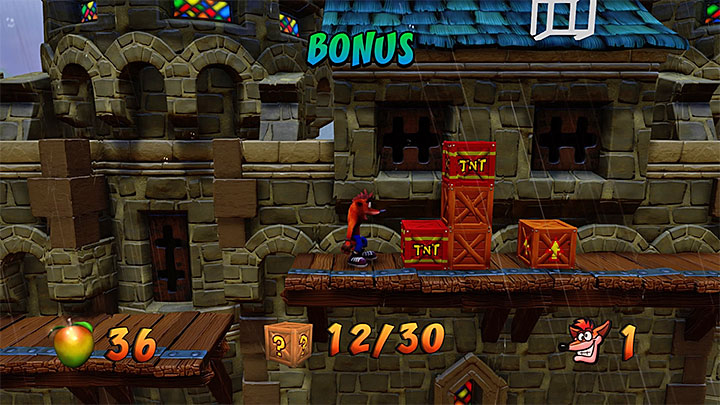 Continue your journey through the village which, for now, won't surprise you with anything new (detonate TNT crates in the same way as always). There is a wizard behind one of the checkpoints and, just like in the previous medieval worlds, jump over magic missiles while you are getting closer to him. When you manage to do that you can use one of the attacks to eliminate him.

Shortly after that you reach a plate with a question mark, presented in the picture 1, that will take Crash to a bonus round. In the beginning of this level you should look for chances to bounce off of exclamation mark crates which allows you to reach those crates that are high up in the air. The most difficult part is presented in the picture 2. Here, you must perform a double jump to jump over two TNT crates so you won't touch any of them prematurely. Go a few steps right and hit a crate with an exclamation mark. Go back left and bounce off of the crate with an arrow a few times. After destroying all crates that are high up in the air (they appeared after you hit the exclamation mark) you can allow the TNT crates to start their countdown.

Go right and when you reach a tower made out of crates you must first jump on the one with an exclamation mark. Get rid of the upper crates and only then you can destroy the lower ones to start another countdown. The only thing left for you to do is to reach the exit from this bonus round. 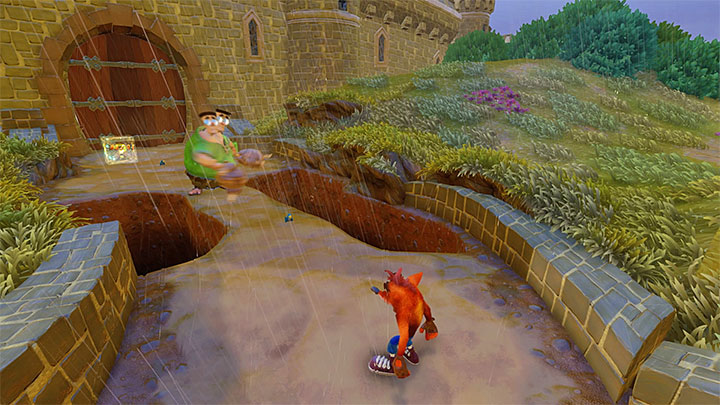 When you go back to the village you must move forward and try to avoid every two-headed giant. When you pass a small water tank you will find a Purple Gem. Lastly, you must avoid two more giants and the one presented in the picture above can cause you more problems. Try to get to him as close as possible and perform a double jump in the right moment to avoid him from either left or right side. Hit the exclamation mark crate and jump into the portal.

Warning - When you complete this level you will have to fight a boss, Nefarious Tropy. The description of that fight can be found in a separate chapter of this guide.