Warning - Red Gem (and all crates) can be found during your first playthrough of this level. However, in a certain moment you must go back to one of the previously visited locations and because of that you can easily miss that moment.

This the second water level and is definitely the most difficult one from all the levels that you have played up to this point in Crash Bandicoot 3. Its biggest hindrance are turbines that appear frequently in this level. They can easily suck in the main hero and kill him. Another problem is the fact that you have to complete certain areas twice in order to reach a secret path and the place where you can get a Red Gem. 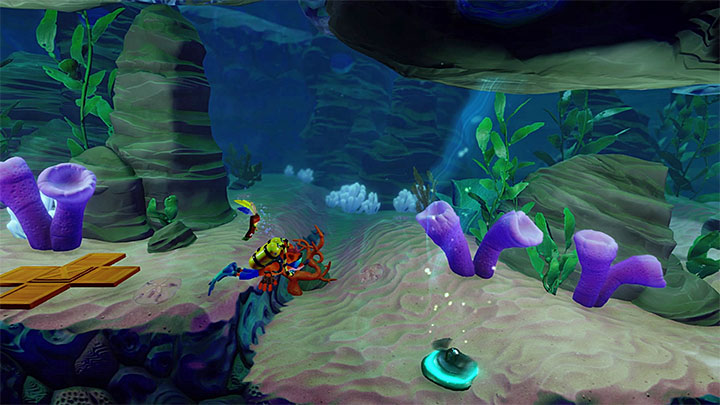 Right after starting the level you find the first submarine and, just like during your previous visit in the ocean, you can use the unlimited amount of torpedoes to destroy crates (the TNT and nitro ones should be detonated from a safe distance), get rid of water creatures, mines and to destroy red coral reefs that hide additional crates.

The game lets you use the submarine until you enter the first tunnel. You must go through it without the vehicle. When you are on your way you must keep destroying crates. After that you reach a lower hole and in the meantime you must avoid electric discharges (swim clockwise). When you exit the tunnel you must head down but watch out for a mine and a fish that jumps out from the left hole, you can avoid it or eliminate the fish by using the Spin attack. At the bottom you can find new crates.

Start swimming right and be ready to quickly eliminate a shark that you can avoid using any conventional methods. Problems will start in the place presented in the picture above. Here, you can find the first turbine and you must avoid being above it when it's active because it can suck Crash in and kill him. Wait for the right moment and swim right quickly (you can help yourself by pressing X button). 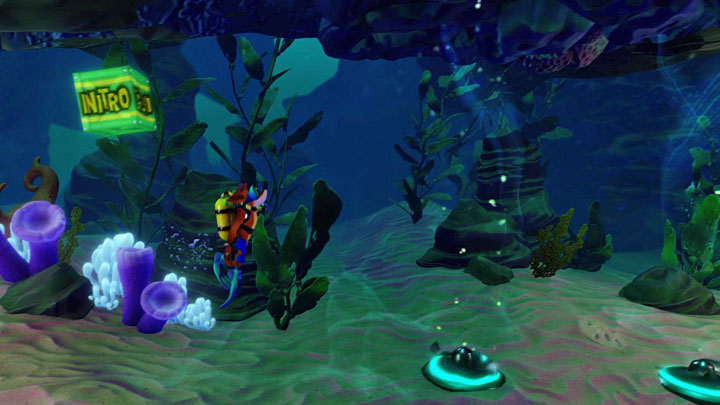 Don't swim too far to the right because there is another turbine near the first avoided one. Act in the same way, that is wait until a turbine shuts down for a brief moment. Another part should be crossed in a slalom which will help you avoid hitting two mines.

Swim into a new tunnel and then start going down. You must watch out for fish that changes their volume from time to time AND you must also look for crates located on small side ledges. Some of them aren't easy to notice which means that you must use the Spin attack more frequently to be sure that you won't miss any of them.

When you exit the vertical tunnel you must get rid of, at least, one of the two sharks. Unlock the checkpoint and skillfully avoid both a turbine and a fish that swims behind it (you can also kill the fish but you shouldn't stop when you want to use attack). On the right you can find another crates and a Purple Gem. Keep swimming right and prepare yourself to avoid the two turbines presented in the picture. Paradoxically, it is recommended to avoid both of them at the same time because the space between them is small which means that you can easily make a mistake and stop in a wrong place. 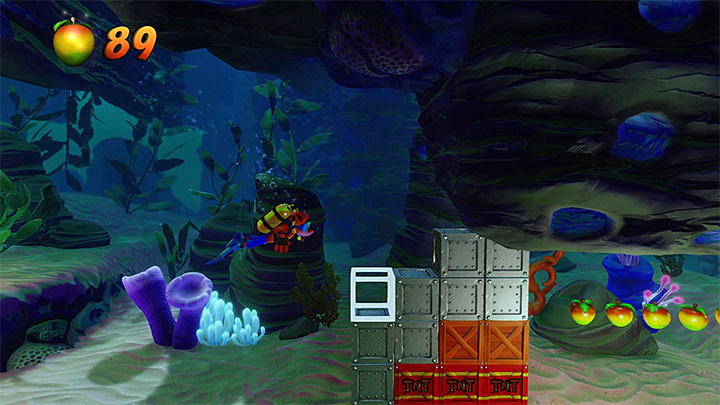 Remember the currently unavailable area on the right side of the two previously mentioned turbines (you can see this place in the picture) because you will have to return here later. For now, you must swim up but be aware of a fish that jumps out from the hole on the left(stay close to the right wall). Swim into a round chamber, swim through it clockwise and use the exit on the right.

When you leave the tunnel you must defeat a fish nearby and only then you can safely avoid a new turbine. A few meters later you can find another submarine. Remember to keep firing torpedoes because they can destroy coral reefs and eliminate enemies (sadly, they can't destroy turbines).

Swim through a big tunnel with two sharks and be cautious when you get out of it. There is a new turbine here but what is more important is that on the right of it there are five nitro crates. Try to fire from where you are and destroy two-three of them and then you can swim right to get rid of the rest of the crates (you must keep a safe distance!). 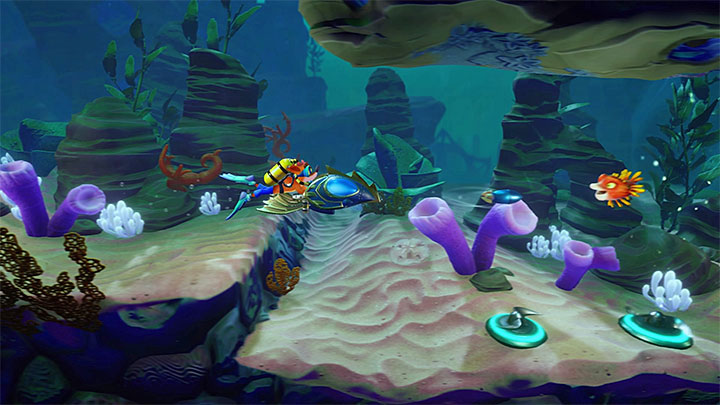 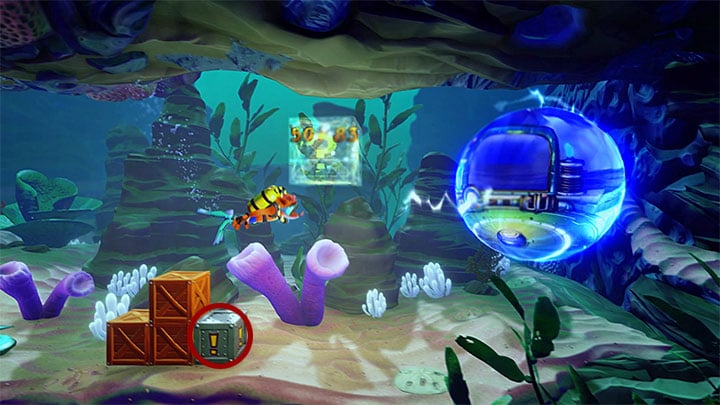 The picture 1 presents another very challenging moment. There are two turbines placed close to each other. In order to avoid them you can use submarine's speed boost, activated by pressing Circle, but in this situation you must stay close to the bottom so you won't enter the portal that ends this level. You must go to the exclamation mark crate, presented in the picture 2. Hit it with a torpedo or with Crash (if you lost the vehicle).

Warning - If you know where the exclamation mark crate is you can hit it with a torpedo when you are on the left side of the turbines. 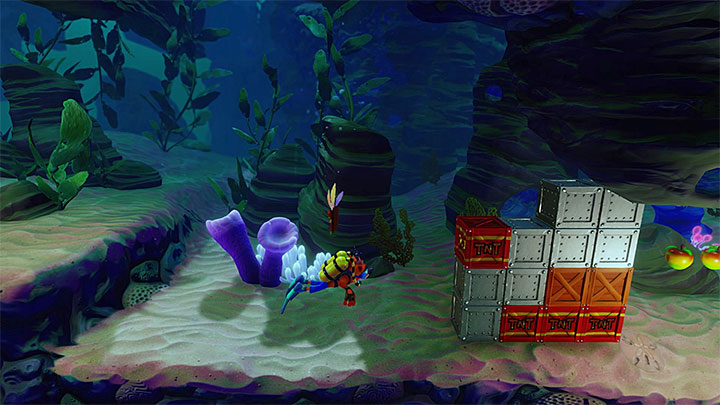 You must now go left because by hitting the exclamation mark crate you unlocked the secret path that you have passed by before. Again, you must avoid being sucked in by any of the turbines at all cost. Go through the vertical tunnel and this time you have move to the bottom of the screen. Your destination is the right barricade presented in the picture above. Here, you must use torpedoes or touch one of the TNT crates with Crash to unlock the entrance to a secret part of the level.

Go right, unlock a checkpoint and swim into a new vertical tunnel. There are no regular crates but at the bottom on the right there are nitro crates that you must avoid. When you exit the tunnel you will find new green crates. Again, take your time because they are close to each other. 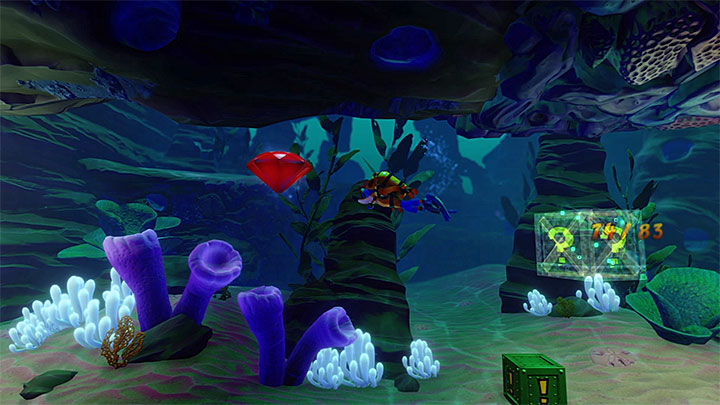 On the left you can find two working turbines. Get closer to them carefully and stay as close to the bottom as possible, thanks to that you won't have to worry about fish that are nearby. Start swimming left when it's safe. Enter a small tunnel and defeat a "patrolling" shark. On the left of the tunnel you can find a wall made out of crates. Touch any of the TNT crates, move away from them and wait for explosion.

Eliminate new sharks and get closer to three working turbines. Just like before, start to quickly swimming left (keep pressing X) when the closest one turns off. The only thing left for you to do is to hit an exclamation mark crate which detonates all nitro crates and take the Red Gem presented in the picture. Luckily, you don't have to go back through the entire level again because next to you there is an alternative portal that ends this stage.