Warning - Completing all activities in this area takes a lot of time and in the beginning it is impossible to do. First, you must get a Yellow Gem which you can receive by collecting any 10 Relics, then you must unlock a hidden portal to Hang 'Em High and, lastly, you must explore its secret path. Only when you have this Gem you can destroy all crates and get two Clear Gems.

Warning - Unlocking Eggipus Rex secret level is also only possible only if you have a Yellow Gem because during the exploration of the path that is connected to the Gem you can catch a pterodactyl. More information about finding it can be found in the walkthrough section of that level.

This level is very similar to the previous one, Bone Yard. However, here you can find more places where you can die. The most difficult part is the end of the level because you have to escape from a triceratops again. The secret location, unlocked by using a Yellow Gem, is also more challenging. 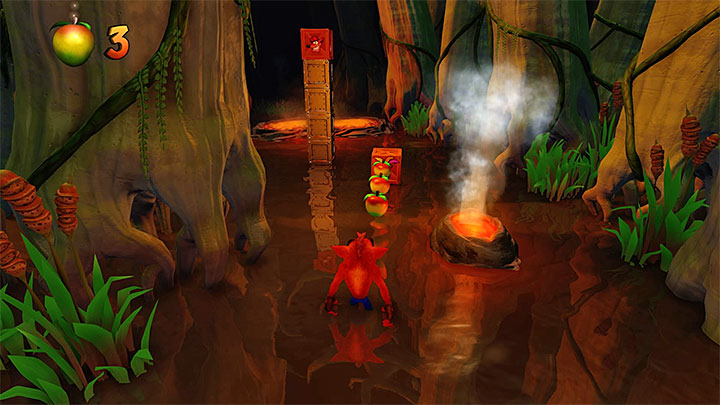 From the beginning of the level you must watch out for small volcanoes/geysers from which a hot gas leaks out (an example is in the picture above). Avoid them and if it is impossible to do you must jump over them when they are inactive. A tower made out of metal crates can be found near the starting place and on top of it there is a crate with an extra life. This is a perfect chance to test a double jump (press X again when you are in the air) which allows you to reach the crate with an extra life and destroy it by using the Spin attack.

Continue your journey during which you must jump over lava tanks, destroy new wooden crates and also avoid or eliminate unusual fish (do this only when they are not spinning very fast). You must also watch out for enemies hidden in water, you can find them a little bit later, that are waiting for a chance to suddenly jump out from it. 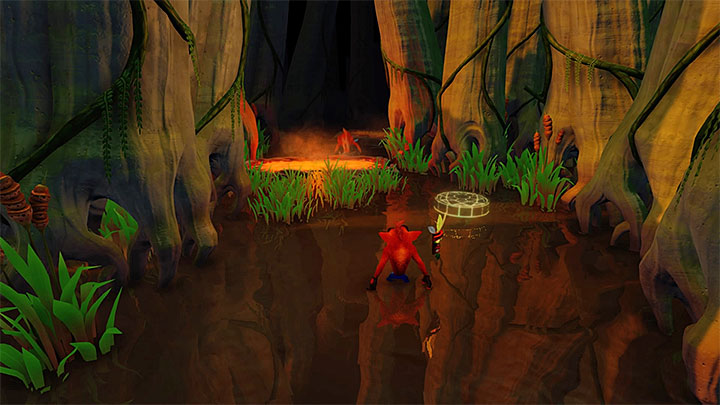 The place, presented in the picture, is reached rather soon. Here, you can unlock a secret passage but only if you have a Yellow Gem. Warning - if you also want to unlock all crates in this level then you have to ride on back of a small dinosaur, which is described below, and destroy all crates before you go to the secret location. When you do that you can go back to the yellow platform that will take you to said secret location.

During your exploration of the secret location you must make precise jumps over lava and, in addition to that, you must watch out in the place where the water suddenly increases Crash's speed. Also, you must be careful in places with TNT crates, especially in a place where one TNT crate is surrounded by a few reinforced crates. Hit the ground from a certain height with your entire body, left from those crates, and thanks to that you won't detonate the TNT crate prematurely.

In the second part of this secret location you must complete a scene in which you must run away from a triceratops. During that moment you must watch out for lava, tall grass and green crates that force you to run in slalom in one of the areas. At the end of this path you can find a Clear Gem and an exclamation mark crate that detonates all green ones that you found on your way here. A new yellow platform takes you to the place in which you finished your ride on back of a small dinosaur. 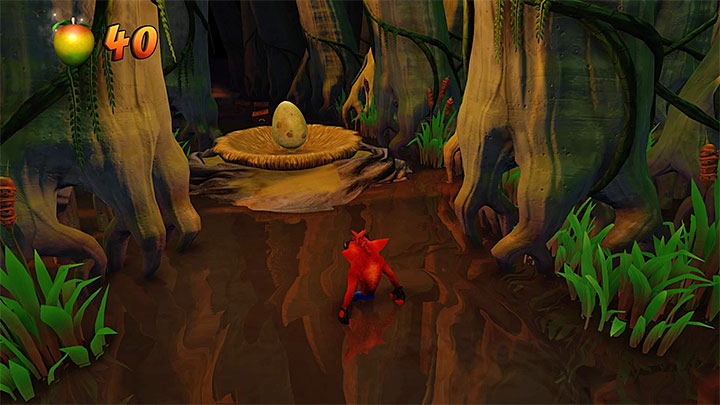 The main path, available during your first playthrough of this level, leads further into swamps. You can think about cutting grass by using the Spin attack and using double jumps over lava just to make sure that you will be safe. Your destination is to reach a small nest with an egg (the picture above). Break it with the Spin attack and a small dinosaur will hatch from it. You must jump on the dinosaur.

The journey on its back is rather simple, especially because in default the dinosaur makes very long jumps that help you in avoiding lava, small volcanoes and enemies that are hiding in water (warning - some jumps must be done diagonally and in addition to that you must make one jump after another). Of course, you must hit all crates that you find on your way and avoid single green nitro ones. The ride ends when you reach the area with more lava in the background. 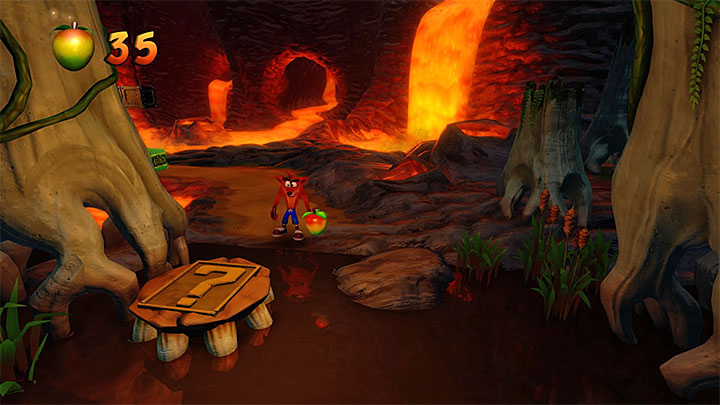 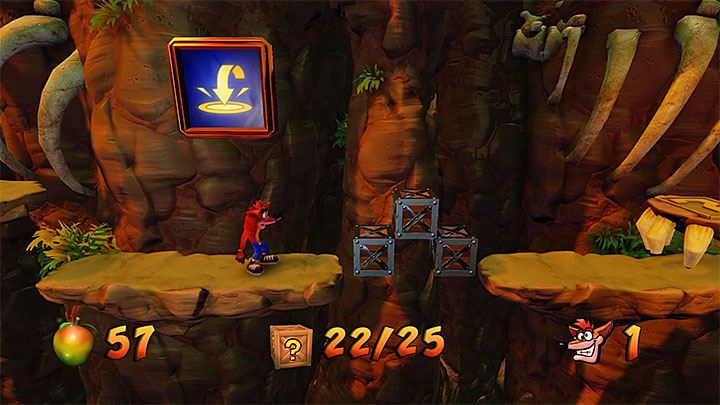 Destroy crates and take Purple Gem found on the main path. When you reach new crates you must start bouncing off of one with an arrow to hit an upper crate with an exclamation mark. This creates metal crates on the right and allows you to reach the one that is above two green crates.

Move forward and stand on the plate with a question mark, presented in the picture 1, that takes the hero to a bonus round. During it you must keep hitting ground with your entire body in order to destroy reinforced brown crates. You can also perform a double jump to reach crates that are high up in the air. The three last reinforced crates are the most problematic ones, they are presented in the picture 2. Stand next to them (on the left or right side), jump and when you are in the highest point in the air you must press Circle to hit the ground with maximum force. A shock wave should destroy all nearby crates. You can now end this bonus round. 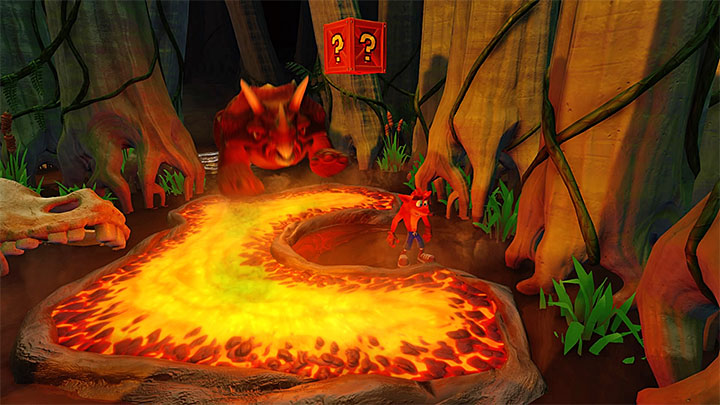 When you return on the main path you must jump down to the lower level and unlock new checkpoint. As you can probably guess, soon, you will start another scene in which you must escape from the triceratops. As usual, during this part you must watch out for lava, mini volcanoes and tall grass that can be avoided or cut by using the Spin attack. The section, presented in the picture above, can cause you the biggest problems. Here, you must jump to a safe area on the right, destroy a crate that is in the air (you can do this during your first jump) and leave this place quickly by using (preferably double) jump.

Avoid the last lava tank and run to the place where Crash jumps down to the lower level. There, you can find a portal that ends this level.