Note - while playing this stage for the first time, you will be unable to obtain any of the two clear gems. You can try to find them only after you obtain the violet gem in High Time. This will unlock the left path in the tomb, thanks to which you can reach the missing crates and one of the two gems (the second one is awarded for smashing all of the crates).

This is the first level in the tomb, but it's none the easier because of that. In this location, there are many traps (including many hidden ones that can be accidentally sprung). Additionally, you may have problems completing the secret path in this level. The secret path itself becomes available only after you have obtained violet gem in another mission. 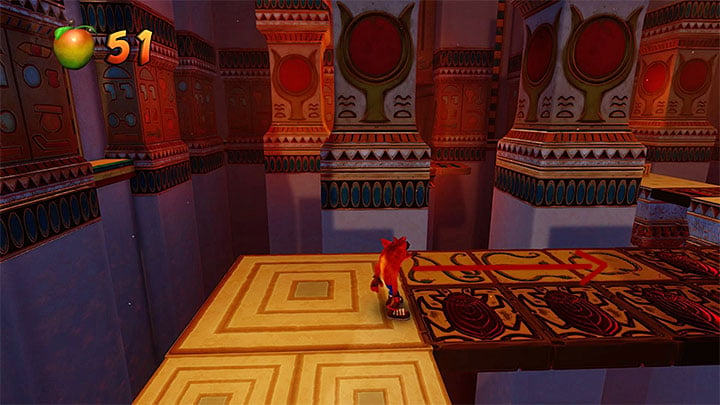 Take a slide to eliminate the first cobra and head towards the tomb entrance. Along your path, smash the crates and jump over the pit with the alligator sticking out. Watch your step after you reach the area with slippery floor. This type of area s resemble ice surfaces in Crash Bandicoot 2. Use slides and jumps while slipping and remember that Crash always has to build up speed.

Next to the slippery floor, there is the first pressure plate. Stand on it and move on while the large blocks are still sliding apart, because they will shut suddenly, after a while. Slide through the right side of the new location and reach another pressure plate that will slide two large blocks apart.

Right after you reach the first checkpoint, you will get near the plates shown in the above screenshot. Only the ones that form the word NEO are safe. The ones with scarabs drop soon after you touch to them. Either avoid them altogether, or run over them without stopping. 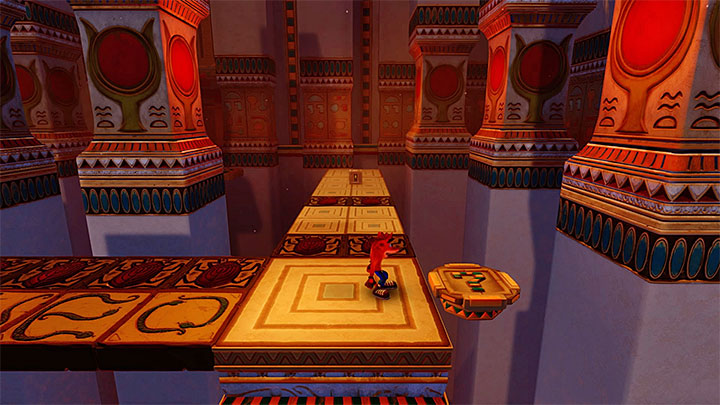 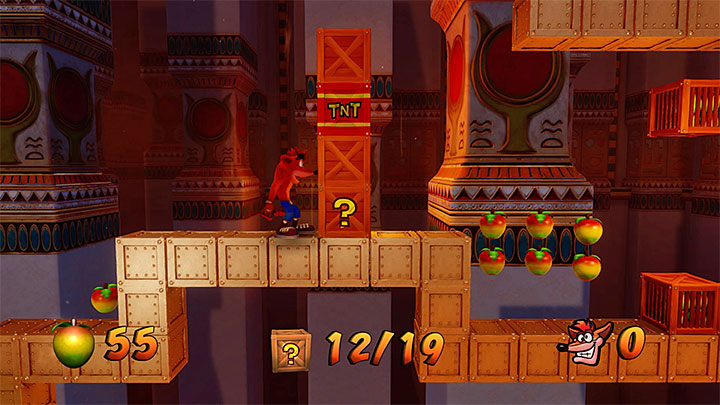 After you get past the first group of plates, you will reach the corner shown in screenshot 1, where there is a moving platform with the question mark, traveling to the bonus round. After you start the round, touch to the TNT crates that you pass by and bounce over the three regular crates above the pit. The only more demanding fragment of the bonus round has been shown in screenshot 2. Smash the bottom crate of the stack. You now have to take a jump from the crouching position to reach its top, followed by another long shot to reach crates above (you have to manage to do that before the TNT crate explodes). Smash the last two crates with apples and leave the location.

Head into the background now and try to jump over the crates with scarabs on them. Hit the crate with the exclamation mark and use the platform on the left, which has started moving. 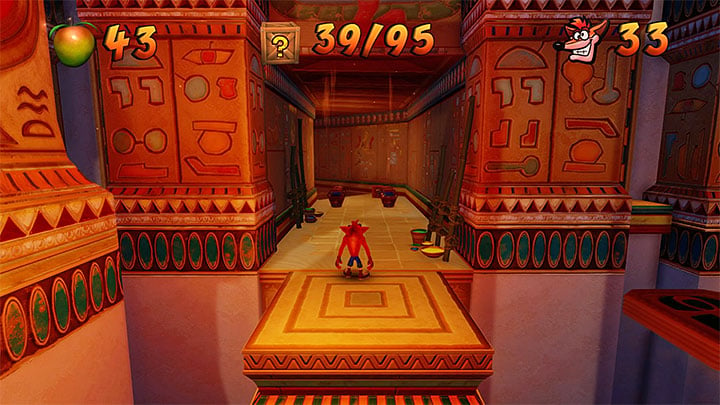 In the next corridor, there are jugs shown in the above screenshot, where there is a monkey hiding. Try to avoid the items that it throws and reach the jugs as quickly as possible to smash them. The defenseless monkey poses no threat anymore, but you can bounce several times off it to collect some apples.

The next part of the tomb is also demanding, because you will have to avoid the moving stone blocks, apart from handling the slippery ground. Try to move forward, but watch out for the dropping blocks. Finally, deal with the opponent manning the lever. 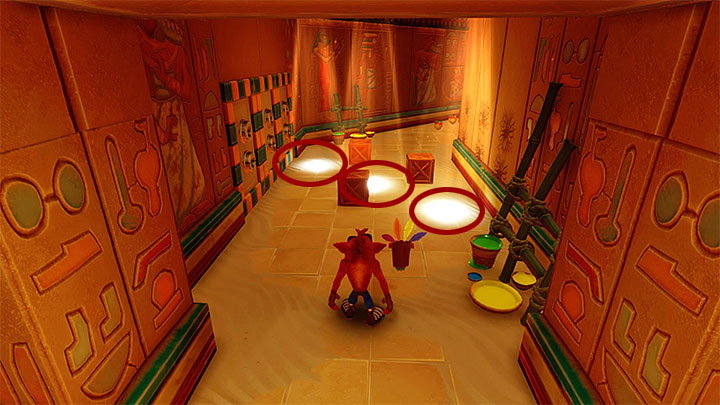 Do not hurry across the next part of the tomb, because there are hidden traps in the location shown in the above screenshot. You have to avoid the lit areas, shown in the above screenshot, because interfering with them fires poison projectiles from holes on the sides (if necessary, use sliding to get through such an area). Move on and dash between two large blocks when it is safe. Following this path, you will reach the next checkpoint. 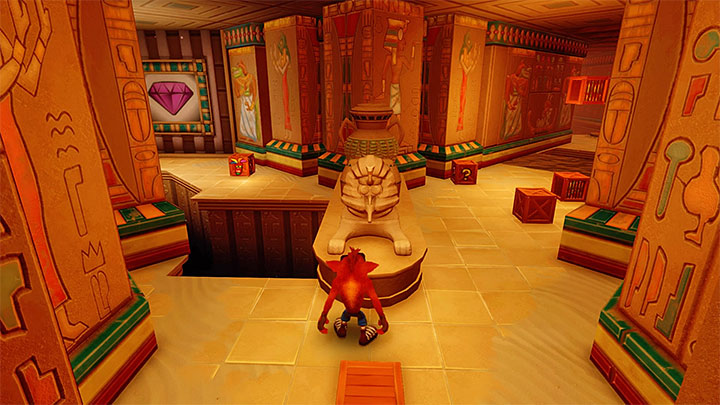 You will approach the fork shown in the above screenshot. The left path leads to a secret location, but you require a violet gem from High Time to unlock it. The other path leads to the exit. Explore it, even if you are replaying this level and you already have obtained the gem. Smash all of the crates in the adjacent corridors (end at the crate with the exclamation mark next to the second pressure plate), because you will not be back to this fork.

Start your exploration of the secret location by sliding and jumping, thanks to which you avoid the projectiles. Do not hurry to slide along the floor, because there are spikes sliding out, at the end of the path. Eliminate the opponent with flamethrower (also, there are many crates here), as well as a monkey jumping between jugs. You will reach another pressure plate. walk onto it, at the moment at which the spikes are retracted and when you will be ready to head towards the clear hem in the distance.

Hit crates with exclamation marks and jump over the moving platforms to return to the main area in the tomb (there is a cobra there). If you want to smash all of the crates in this level, you will have to return a little and explore the other part of the right path, which you have missed. Smash all of the crates. The remaining ones are in the corridor where traps are fired from the wall (there is an extra life in one of the crates). 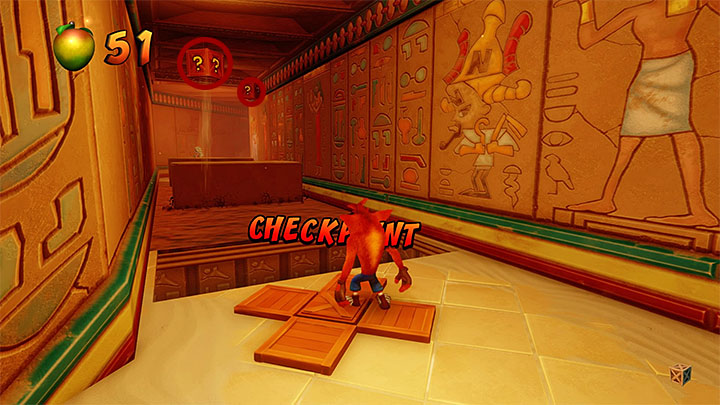 If, after reaching the fork,, you have followed the right path (the only one available while playing the this level for the first time), smash all of the crate and watch out where you have to jump over a pit, while sliding over the slippery surface. After you walk onto the pressure plate to reveal a small bridge and use it to reach the moving platform. Do the same in the case of the next plate, thanks to which a small ledge will slide on the left.

In the next part of the tomb, watch out for the lit areas. You can take a long jump over the pit on the left, or run carefully over the right part of the corridor. Smash the crate with the extra life.

In the next corridor, note the two crates suspended under the ceiling, shown in the above screenshot. You can reach them by bouncing off the moving stone blocks and spin-attacking them in mid-air. Finally, stand carefully above the opponent with flamethrower. Head towards him, when he turns left or right. It is best to attack him with a slide. 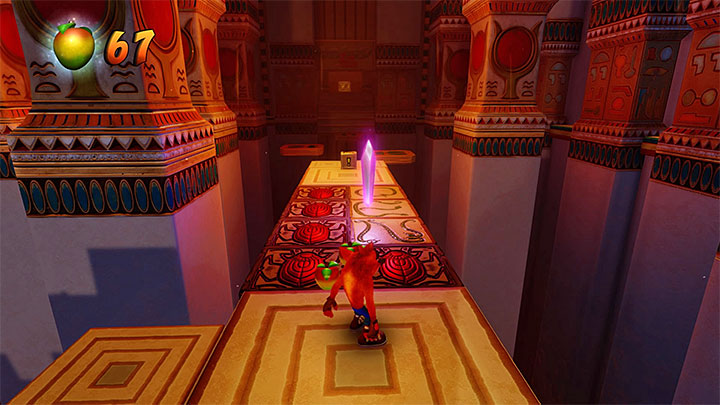 Both paths (the left one which becomes available after you use the violet gem and main one to the right) converge in the spot shown in the above screenshot, where you also have to eliminate a cobra. Get around the plates with scarab on them and jump towards the stable part of the bridge(NEO) where there is the violet crystal.

Finally, hit the crate with the exclamation mark and take several jumps over the moving platforms. Thanks to this, you will reach the last chamber with a portal that will end this stage.