Note - You do not find the violet crystal anywhere along the ride. You can obtain it only by coming in first.

Here, Crash starts a motorcycle race. The mission is not difficult, in itself, but it is a good idea to play it twice. While playing the race for the first time, make sure that you have smashed all 13 crates. The second time around, try to end the race flawlessly, thanks to which you will overtake all the opponents and come in first. 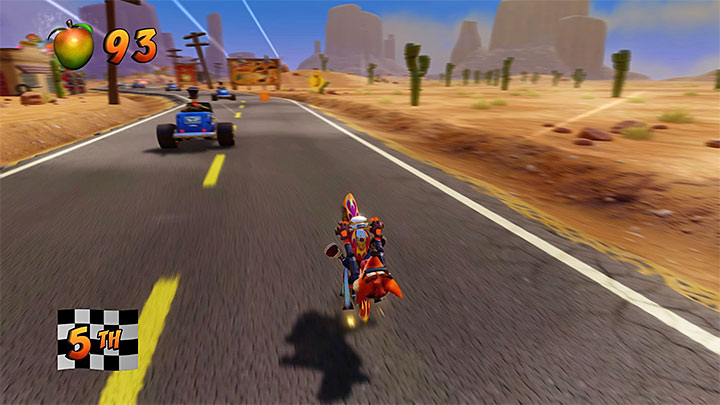 From the very beginning of the stage, keep an eye out for destructible crates in the distance. Apart from that, try to overtake opponents and swerve around immovable objects, such as police cars.

In specific spots, there are green pressure plates that give you boost (as shown in the above screenshot), BUT this comes at the cost of maneuverability. Press L2 (brake) whenever you spot a nearing edge of the asphalt road, because you will lose speed after you enter the roadside area. Apart from that, when you do wheelies, you lose control of your bike and may miss crates (one of them has been placed right behind the first green plate). 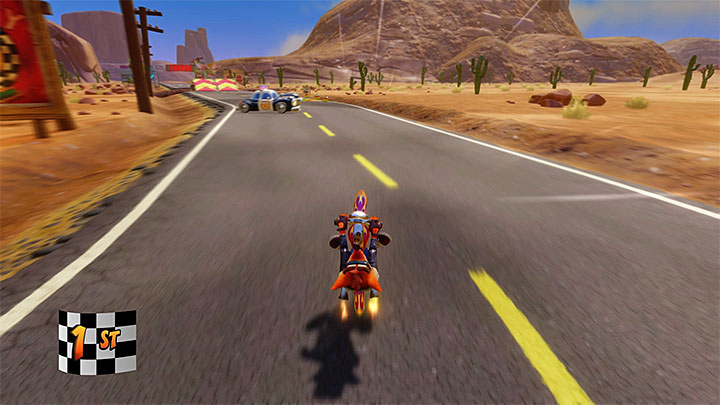 Ramps are another type of fun here. Do not ride onto each one of them. Choose only the ones with crates suspended over them, which you can smash in mid-air.

It has been mentioned earlier that it is a good idea to complete this stage twice and try to win the race the second time around. While riding for victory, swerve around the crates and ramps. Focus only on winning the race and on making use of green plates. At the end of the route, there are as many as three such plates (on the right, on the left and on the right again). Thanks to them, you should easily take the lead (the above screenshot). Finally, ride onto the double ramp. After you cross the finishing line in the first place, you will receive the violet crystal.