Note - The yellow gem available yellow gem here is inarguably the most difficult to obtain, out of all colored gems. It requires you to obtain 10 relics from time trials first in (any) previous levels. After you do that, in the portal room, there will appear an orange platform which will warp you to the basement. There, you will find a portal that will take you to a secret part of Hang 'Em High, where you find the yellow gem. To learn more, see the bottom of this page.

This is the first Arabic stage. It is not difficult, but distribution of some opponents and traps increases the risk of making a mistake and dying here. While here, for the first time, do not bother about finding the yellow gem, because you can only reach it after you use the portal in the basement of the main portal room. 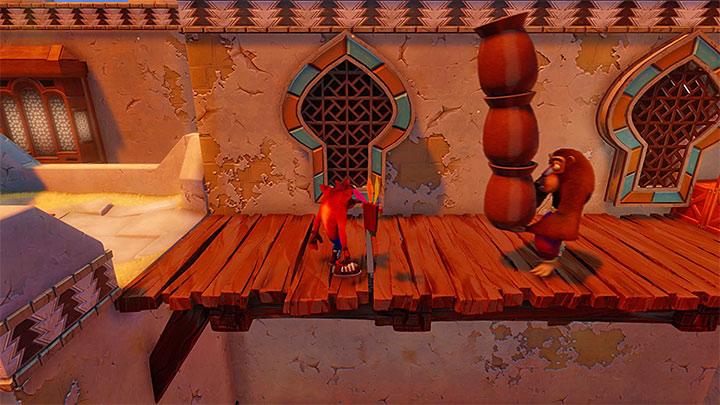 Take several jumps to reach the rooftop of the first building. The area is being patrolled by an opponent with saber. Do not approach him and wait for him to turn away. That is when you should follow him and eliminate him with a slide, which decreases the risk that he will turn towards you and attack.

Follow the path. Behind one of the corners, there is another new opponent, who is flying on a magic carpet. Also in this case, it is better to slide into him. Bounce off the crate with the exclamation mark and grab onto the grates overhead to move on. Along your path, use Spin attacks to smash the crates. Do not let the scorpion attack you.

You will run into much more danger right after you let go of the grates and go right. The monkey shown in the above screenshot carries three jugs. Do not attempt to attack it with the standard Spin attack, because you would fail. Instead, slide into it, thanks to which you will defeat the animal and smash all of the jugs. 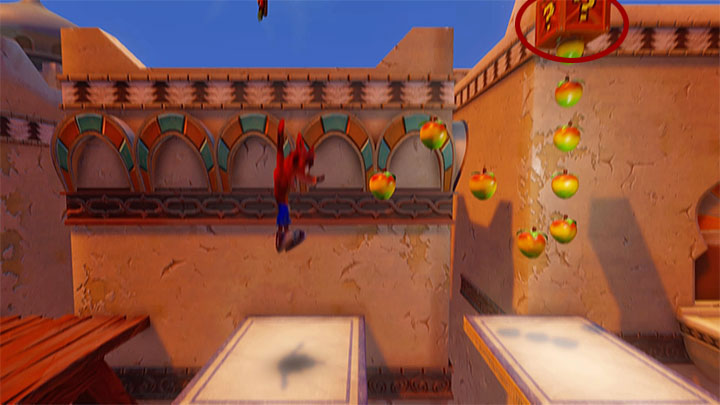 Head right and eliminate one more opponent on the flying carpet. You will reach two narrow roofs that you can bounce off. Bounce off the one on the right several times, thanks to which you will reach a crate high above and smash it (shown in the above screenshot).

Soon after you bounce off a crate with the exclamation mark, you will run into a monkey with jugs. Just like earlier, slide into it properly. Follow the path and watch out for scorpions, while moving in the hanging position. You can now spend some time observing the route of each of the scorpions, which will make it easier to get around them (you can also kill them, but this is unnecessary risk). 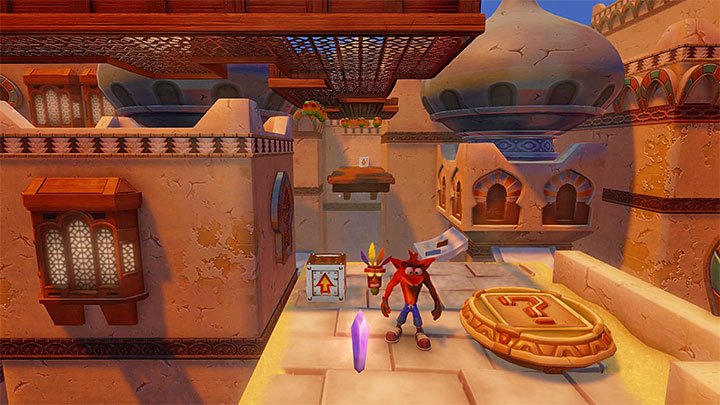 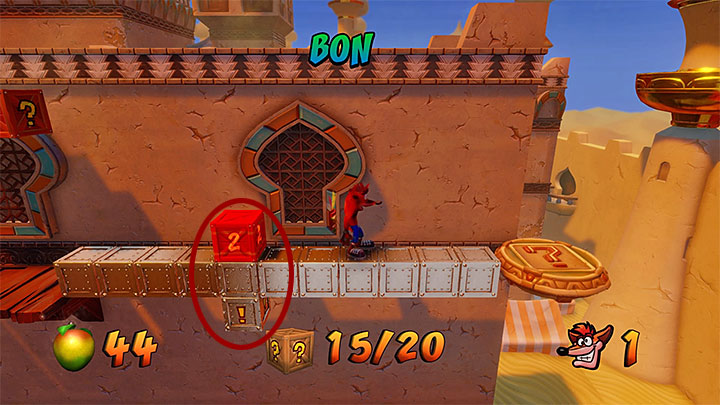 Right after you let go of the grates, you will land right next to the violet crystal and a plate with the question mark, shown in screenshot 1. This is where you start the bonus round. In the round, there are 20 crates to smash. At first, the crates resemble stairs and it is a good idea to bounce off them, one after another, if you do not want to be bothered with taking long jumps to reach the crates suspended higher up. Smash the big bunch of crates (you will obtain an extra life, thanks to one of them), and go right.

Watch your steps after you reach the area shown in screenshot 2. The crate shown in the above screenshot transforms and you have to jump onto it after it changes into a red TNT crate. Get away from it afterwards and let the explosion reach the crate with the exclamation mark below. You can now jump onto the crate with arrow on the left and bounce off to reach the regular crate high above. 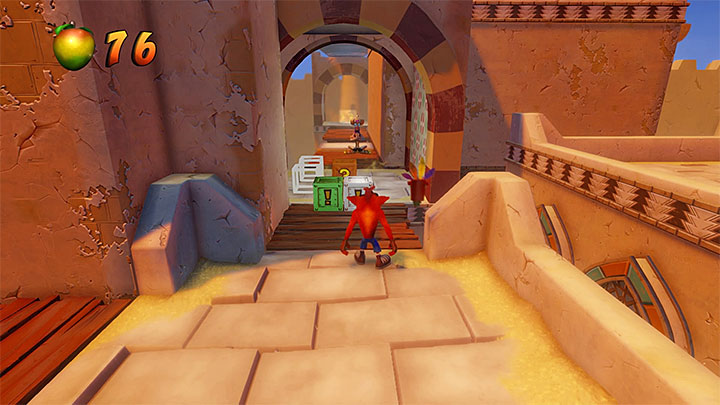 After you have completed the bonus round, bounce off the arrow to grab on to the grate and head deeper into the background. Take your time, because there is a monkey on one of the ledges above. After you reach the checkpoint, ignore the three crates nearby, because one of them is a nitro crate and touching to the stack will result in an explosion.

Wait for the opponent with saber to go right and jump onto the neighboring ledge. Bounce several times off one of the nearby trampolines, because you will get another opportunity to smash a crate high above. After that, jump onto the trampoline on the right and try to land on the monkey to kill it.

In the final part of this stage, note the two metal crates with the exclamation marks, shown in the above screenshot. Hit both of them. Get around the last opponent and reach the portal to end this level.

How to use the secret passage: 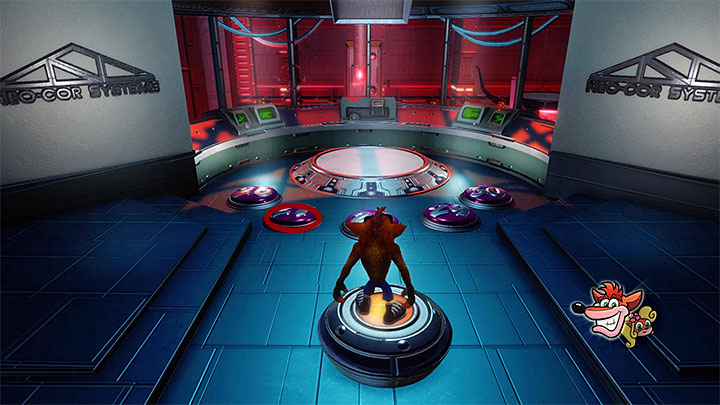 It has been already mentioned that you cannot obtain the Yellow Gem while playing Hang 'Em High for the first time. This becomes available only after you have met certain conditions: 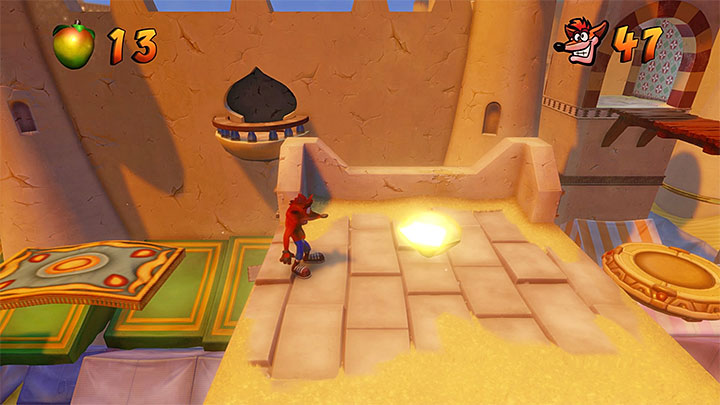 This location is not too difficult and, if you already have the bazooka, you can use it to eliminate some of the opponents and obstacles. The most demanding is the section, where you have to jump over towers that get successively taller, from nitroglycerine crates. You should especially watch out by the last tower, and jump as high as you can, off the nearby trampoline, to make it over the tower. Soon, after you have jumped over the trap, collect the Yellow Gem shown in the above screenshot The Yellow Gem. You can now return to the main part of the stage. You will warp near the end of the stage.