Just like in the previous location, the area across first available portal is the Medieval times. You have already seen some of the obstacles here in Toad Village, but there also are some new ones. Also, it is a bit more complicated to smash all of the crates in the bonus round. All in all, you can expect higher difficulty level. 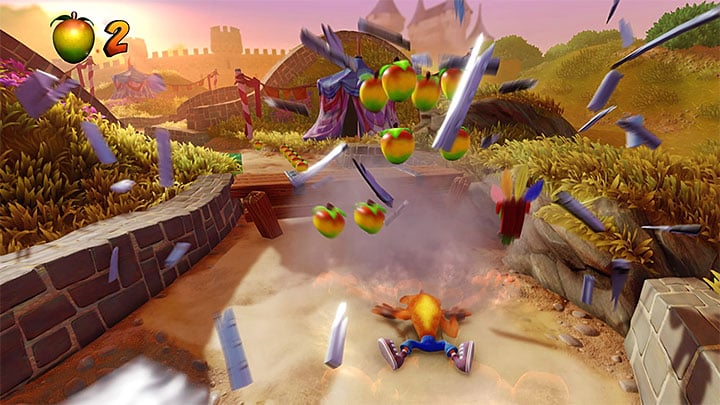 Follow the village road and smash crates along your path (there is the first Aku Aku mask in one of them) and either kill or avoid toads. Soon, you will run into some reinforced crates. If you have already played Crash Bandicoot 2, you should remember that you can smash them with body slams (the above screenshot). You perform that by jumping and pressing Circle in mid-air (above destructible crates).

Follow the path and watch out for the first green crate. One of the crates in the next bunch transforms and it is a good idea to smash it when an icon of Aku Aku mask appears on it. 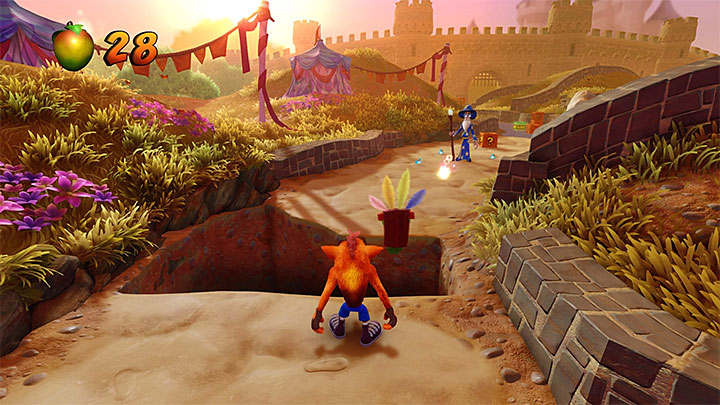 Up ahead, you encounter the wizard shown in the above screenshot. He keeps firing fireballs. Their range is short and they do not move too fast, but they will start to follow you after you come closer to the wizard. Therefore, try to take jumps while approaching the opponent and not to stop. You can also defeat him by sliding into him, or with Spin attack.

Follow the path. You should not encounter any problems, but there is a tower of three reinforced crates, in your way, and a crate with an extra life. Take a high jump after ducking and jump onto the reinforced crates to body-slam into them. Up ahead, there is a bunch of crates, where one of them transforms. Wait for an icon of Crash to appear on it and smash it, thanks to which you will obtain an extra life. 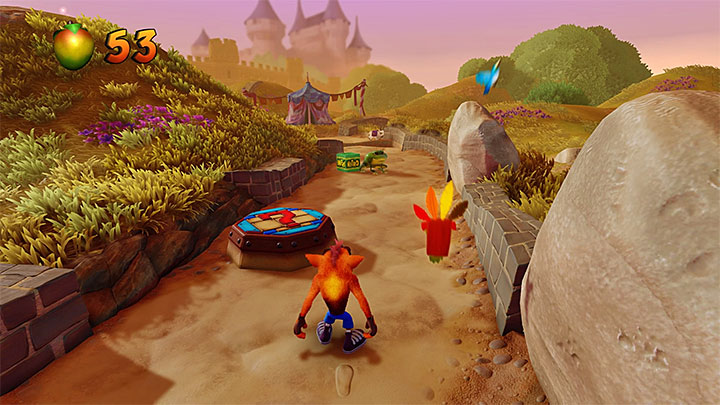 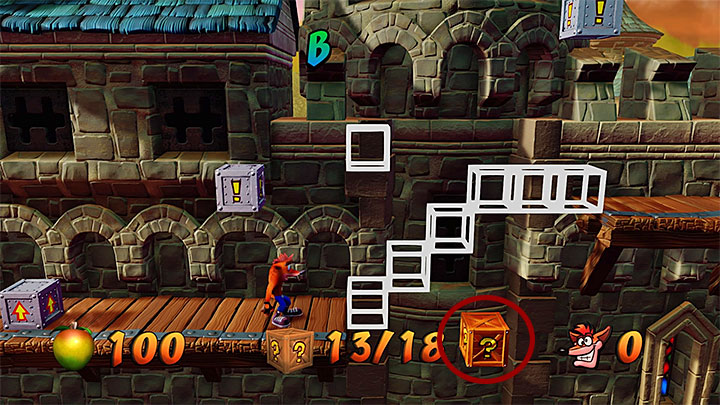 Head on. Watch out for a knight and a wizard (go towards him in a straight line and jump over the fireballs). For some time now, you should not have any problems. Watch your step., though, where knights and toads are staying near green crates.

After a while, you will reach a pressure plate with the question mark shown in screenshot 1, which warps you to the bonus round. In here, first jump over crates with arrows to reach areas high above. In a later part of this round, start by jumping onto the crate above the pit, shown in the above screenshot. ONLY AFTER you smash it, hit the metal crate with the exclamation mark and take the passage that unlocks. Hit one more exclamation mark and complete the round.

While exploring the final part of the village, carefully walk around, or kill the two knights next to each other. Nearby, there is a violet crystal. The last knight is surrounded with green crates, but you can knock him back, towards the crates, with Spin attack. Hit the crate with the exclamation mark to detonate nitroglycerine and leave this stage.