This level isn't that difficult. Coco uses a jet ski throughout the entire stage. In the beginning you must only be sure that you reach all crates but in the later part of the level the chance of you dying will keep increasing because you can hit a trap or an obstacle. But despite of that reaching the "finish line" shouldn't be a problem to you. 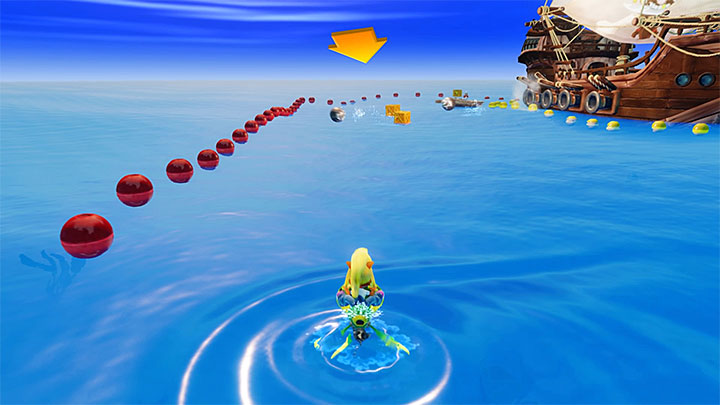 When you start the level you can spend a moment in the starting location and the ramps nearby to learn the basic controls (performing tricks in the air isn't rewarded). Avoid the first swimming bomb with a skull and reach the first ramp with a crate hanging above it. Every time when you approach a ramp you must jump perfectly so you can reach a crate and destroy it but remember that in the later parts of the level a trap can be hidden behind a ramp.

Follow the linear path and focus only on finding and destroying crates. The problem starts when you reach a ship, presented in the picture, that keeps firing. You should spend a moment to learn in what order the rockets are shot and move forward when it's safe. Besides the ship there is also a boat, you can't hit it (when you do it you will die immediately). 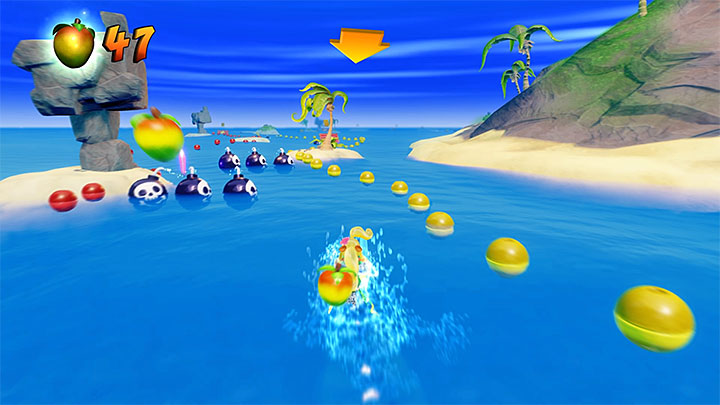 Unlock a checkpoint and when you turn right you must start avoiding bombs. Almost all ramps after the next one will have "surprises" near them. It can be bombs or boats behind them. Before you approach each ramp you must be sure that after landing you will have enough time to avoid danger.

In the place presented in the picture you must make a small slalom and catch a Purple Gem next to a bomb. Keep jumping and avoid bombs (there is one that swims next to a place from which you can jump). Later, there is also a place where you have to squeeze between an island and a few bombs. When you get there you should move slowly so you won't make a mistake. When you avoid the last set of bombs you reach a cavern and the level will end.

Warning - When you complete this level you must face a boss - Tiny Tiger. The description of that fight can be found in a separate chapter.