Warning - If you want to complete this level in 100 percent you need to have a Red Gem found in Deep Trouble level (the oriental location). However, you don't need the Gem to find and destroy all crates. It is "only" used for unlocking a secret path and finding the second Clear Gem located at the end of it.

This is the first level that, in some places, may cause you trouble. To be more precise, they are the parts of the level in which Crash must run away from a giant dinosaur. You can easily make mistakes there and, e.g. make a bad jump above lava. However, the fact that you can find all crates during your first try is a consolation. 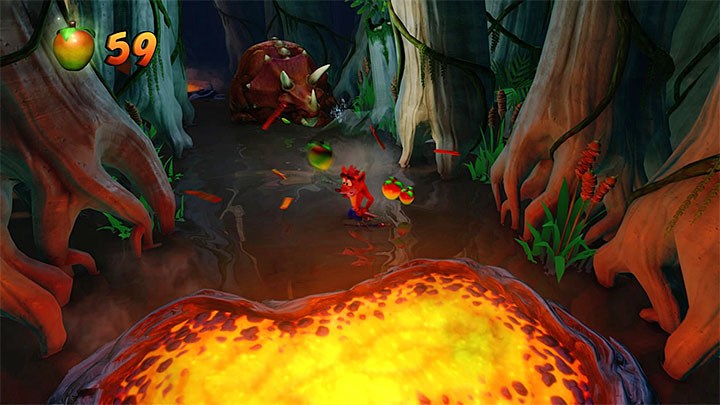 The moment in which you run away from a giant triceratops starts after you start the level and destroy three crates that are nearby (don't worry if you don't manage to destroy them all, the dinosaur will help you). During this moment you must avoid touching lava (in the beginning it is easy to do) and jump above fallen trees.

When you fall to the lower ledge the game will allow you to destroy a few crates and unlock a checkpoint. But soon, another chase will take place. This time you must jump above two lava tanks that are as wide as the screen (an example is presented in the picture above). It is easy to make mistakes here and you can either jump too early or too late. If you keep dying because of those mistakes you can think about using long jumps. Just to remind you, you perform them by using slide (Circle) and then you quickly press jump (X) before the slide ends (and before Crash touches lava). The triceratops will leave you after landing on the second lower ledge (but only for a moment) and the next areas can be explored in peace. 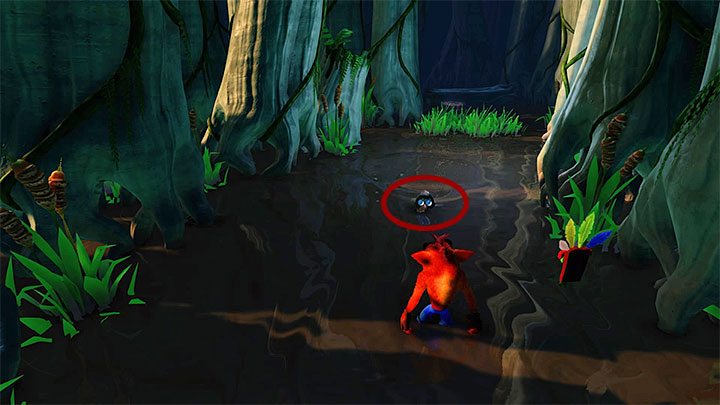 Follow a linear path and remember to not use the Spin attack on TNT crates. Instead of that you can jump on them and then run away from the crates when a countdown starts.

When you are crossing swamps for the first time you can notice plants that slows Crash down. You can avoid those places, move faster by jumping or clear the area by using the Spin attack. The enemies that hide under water are a bigger problem. They start rushing at Crash when they notice him. An example of a such enemy is presented in the picture above. You must quickly get away from them or use the Spin attack in advance in order to eliminate them (before they jump out from the water and catch Crash). 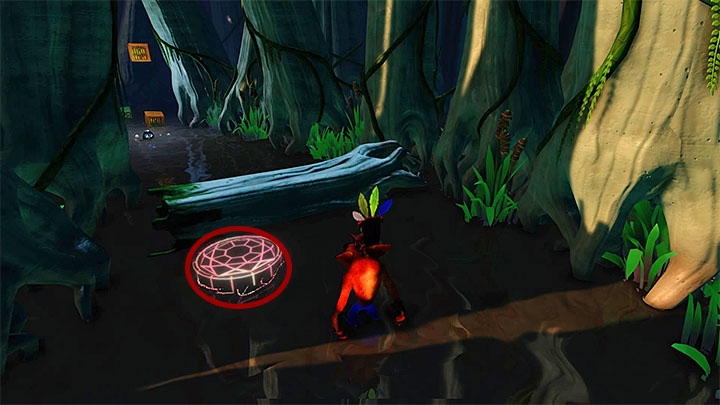 On the swamps you can unlock a secret location. The picture shows the place where you can place a Red Gem. However, you get the Gem in the later part of Deep Trouble level.

A red platform takes crash to a place where you can have additional (and optional) scene in which you must escape from the dinosaur. During the chase you must be quick in destroying grass and use Double Jump to avoid any water bodies. The ability is automatically unlocked after defeating the second boss in the game, Dingodile.

Mini volcanoes, from which a hot gas leaks out, are additional obstacle in this secret location. Don't jump above them but instead you must run next to them (the exception to that are volcanoes that are temporary inactive). Completing this very long chase scene (it only has one checkpoint) allows you to reach a Clear Gem. 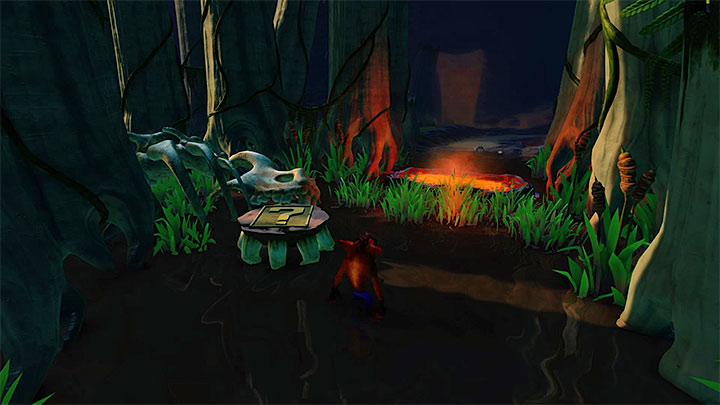 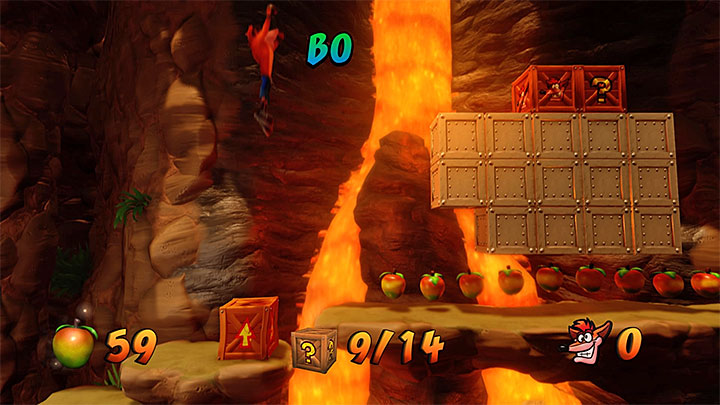 In the main part of the level you must continue exploring the swamps. You must watch out for the first green crate with nitroglycerine. If you played Crash Bandicoot 2 then you should know that you must avoid touching those objects AT ALL COST. Green crates can be usually detonated near places that let you complete a stage. You can do it by hitting crates with an exclamation mark.

On the swamps, you can also find one plate with a question mark which is presented in the picture 1. As always, standing on it takes Crash to a bonus round. This one has 14 crates that must be destroyed. Getting rid of them all is not difficult, although you must be careful in the place presented in the picture 2. Here, you must destroy the lower crates but don't destroy the one with an arrow that can be found on the top of a tower. Jump on the crate and bounce off of it a few times so you can successfully reach metal crates on the right and destroy two normal crates that are on top of them. 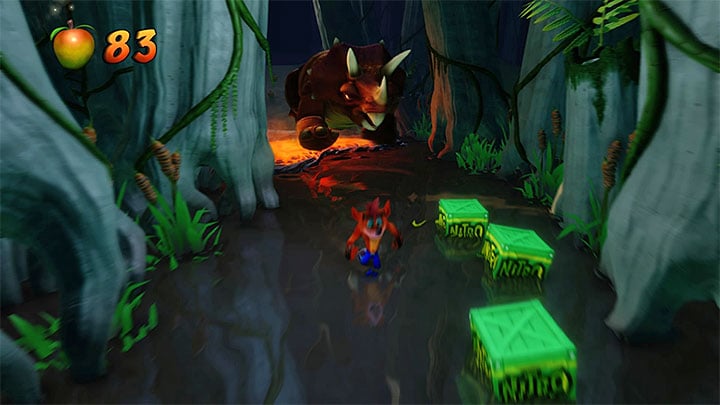 When you return from the bonus round you must avoid lava and enemies that hide under the water. After that you can move forward. During your walk you can take a Purple Gem and hit an exclamation mark crate. It unlocks regular crates on the right. Keep jumping on them to reach the highest one.

Soon, you will participate in the last escape from the triceratops. This scene also forces you to make perfect jumps above lava (you can think about using long jumps). Keep avoiding grass or you can quickly clear your path by using Spin attacks.

In the later part of this scene you must move to the right so you can jump above huge lava tank. Then, you must move closer to the left and run next to green crates (the picture above). Lastly, you must try to quickly move through an area covered in grass. Luckily for you, if you didn't die yet then the dinosaur should be far behind you. A few steps later the chase will end. However, you must remember to quickly hit a metal exclamation mark crate on your way. By doing that you detonate all green crates that you could find on your way here. Only after that you can jump down and go through a portal.