This page contains a description of unlocking and completing one of two secret levels in Crash Bandicoot 2: Cortex Strikes Back - Totally Bear. In this level, you have to deal with pervasive darkness, and similarly to the Night Fight level from the main part of the game, fireflies will help Crash to light up the area.

How to unlock the Totally Fly level? 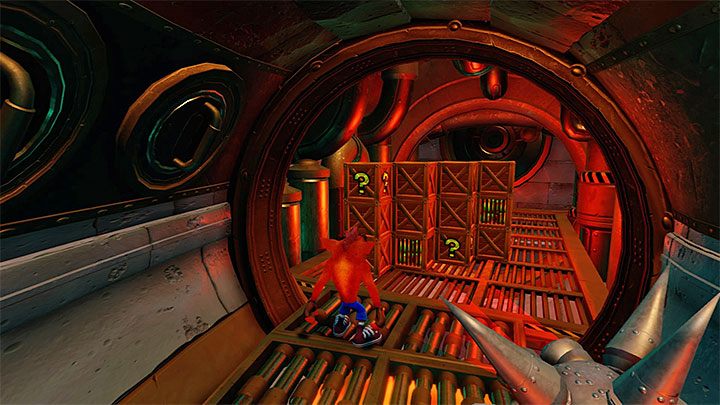 You can unlock the Totally Fly level in the Hangin' Out stage that begins after you've walked through the portal in the Alpine Warp Room. In this level, Crash traverses sewers, and your task is to locate a secret portal. Continue exploration until you reach the place shown in the above image. Destroy the creates around and jump into the hole in the floor that you've just uncovered. 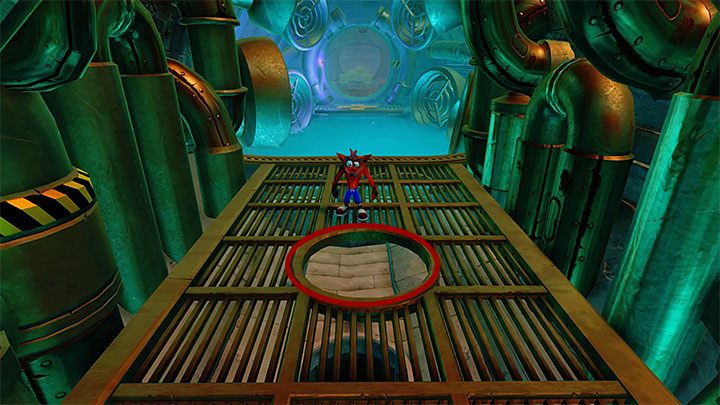 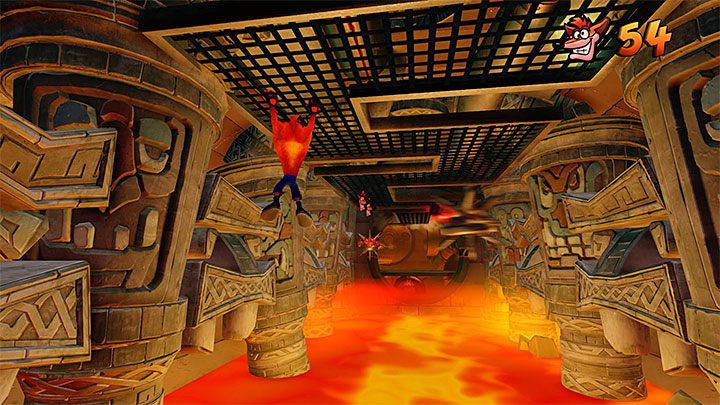 Having landed in a new part of the sewers, you are next to a checkpoint. You can activate it but don't go further up. Instead, go towards the bottom part of the screen. Jump into the small hole marked in the image 1. The tunnel will lead you to the location from the picture 2. There, you have to avoid fast-moving robots but you can also find extra lives. 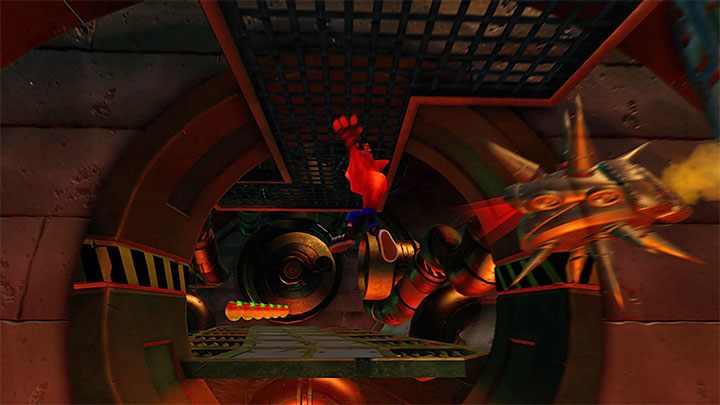 Get to the metal ledge (the above picture) and a secret portal will activate. It will take you to a basement (you'll get the Hang In There, Maybe! trophy). In it, there is a portal that lets you start the Totally Fly level.

Secrets in the Totally Fly level:

Description of the Totally Fly level: 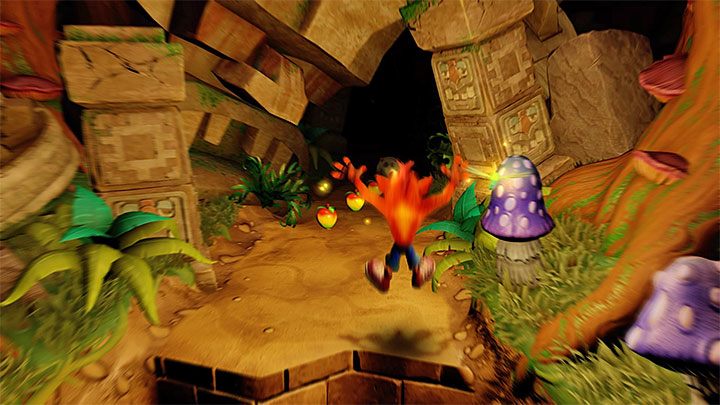 Similarly to the aforementioned Night Fight level, you have to use the help of the fireflies you encounter. When you get close to them, they'll start following Crash and light the area up (the above image). Unfortunately, this is temporary help so if you don't reach another group of fireflies in time (they are found by crates and checkpoints), you'll be forced to travel in darkness (the area can be slightly lit up by the robots you encounter).

Generally, you have to stay in motion all the time. Don't waste too much time on eliminating opponents or avoiding obstacles (mainly precipices but you'll also run across several TNT crates). 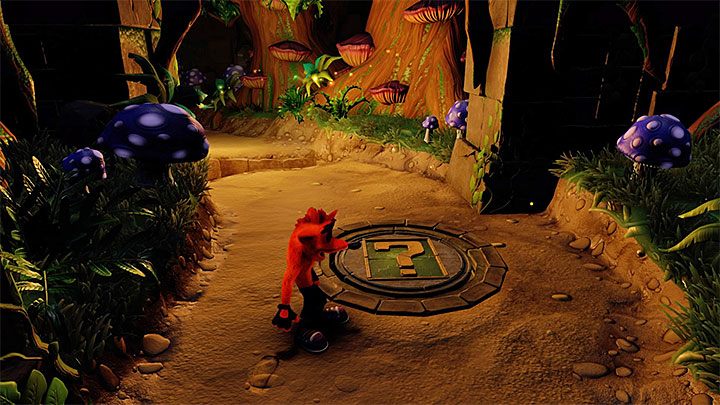 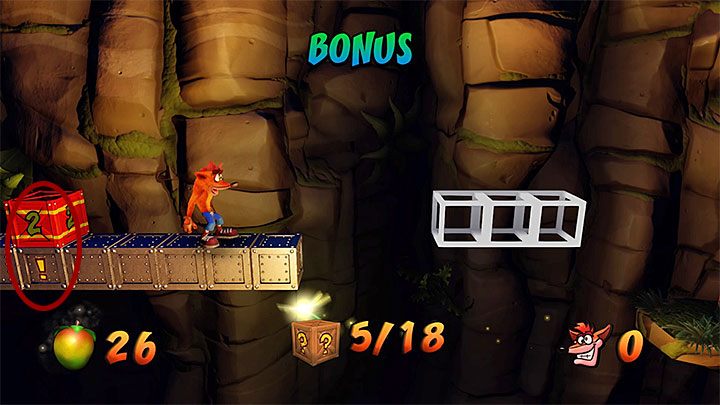 While travelling, you'll see the plate with a question mark shown in the picture 1. Stepping on it activates a bonus round. It's not difficult but have to keep moving to the right all the time because the fireflies won't "wait" for Crash. If you let them go too far away, darkness falls. Mind the TNT crates and touch the crate shown in the picture 2 to make it explode and thus unblock the way forward. In the final part of the round, destroy several crate "towers". 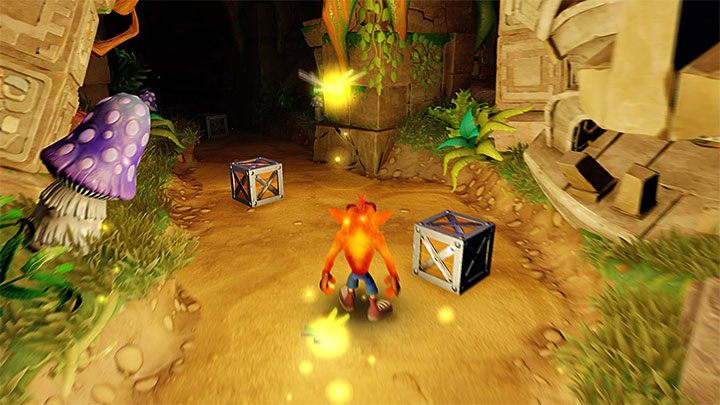 The final part of the said level, shown in the picture above, is the hardest. There are several brown crates here. Just a reminder: Crash can break them only by hitting them with his entire body (press Circle while in the air). Try to avoid new fireflies when you reach this place so that they don't start following Crash too soon. It is incredibly important, because, on your way out, you'll run into several crates and precipices that are easily missed in the dark.

When you reach the exit, don't forget to hit the crate with the exclamation mark (you'll detonate all green crates) before you go through the portal.