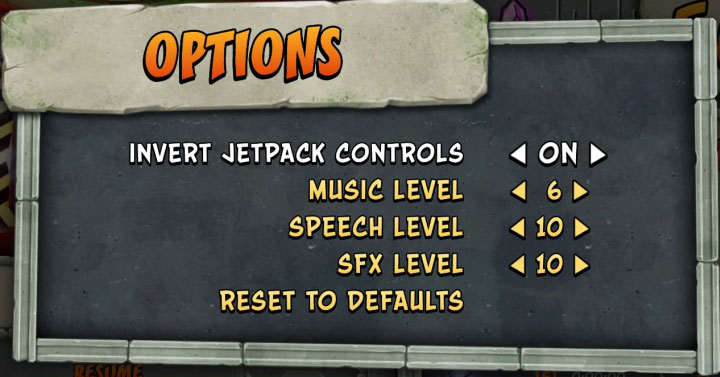 This is the first of a few levels in which you must use a jet pack. The controls for it are not very intuitive. You can do what the game suggests and change the vertical controls in the options menu (the picture above). In default, the jet pack moves with Crash in a direction that is assigned to a given button (e.g. Crash goes up when you press up on d-pad). Inverting the controls allows you to have more comfortable controls. Of course, this is a personal preferences and, after some time, you can get accustomed to each of the control schemes. 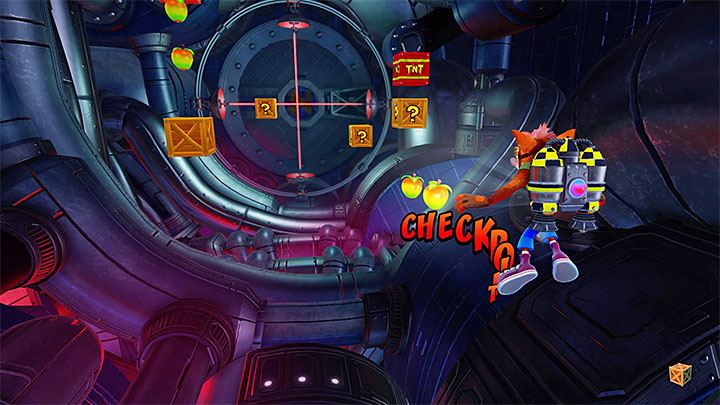 When you equip the jet pack you can start your flight (R2 allows you to fly forward and L2 is used for turning back, e.g. when you miss something). You don't have to hurry and instead you should carefully approach each of the crates and destroy them (just like in any other levels, by using the Spin attack). You must also watch out for traps and obstacles and the first one is a big red energy beam. The next area also adds red hot pipes that you can't touch.

The Four rotating pulsing objects are the first bigger trap. You should wait until they are as far from each other as possible and when this happens you must fly through the hole in the middle. When you get through them you should stop and destroy nearby crates.

In the next tunnel you must unlock a checkpoint and detonate TNT crates by touching them (don't use the Spin attack!). Approach the lasers presented in the picture carefully. They activate alternately in three different positions. Choose one that is suitable for you, place the jet pack in the right spot and fly forward when a laser beam disappears from the screen. 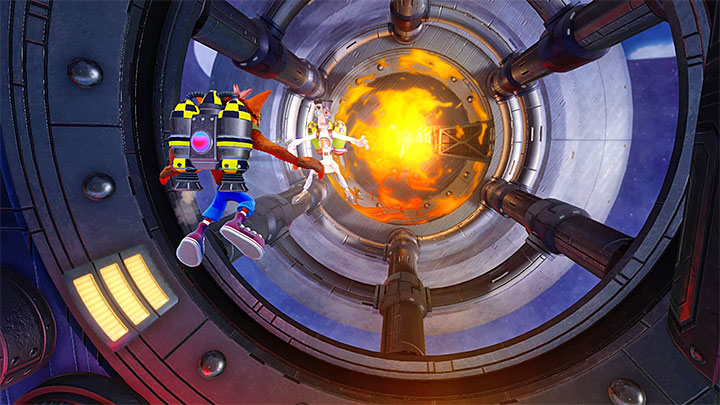 Avoid red obstacles and reach the place in which you can encounter a scientist with a jet pack, presented in the picture. Defeating him takes some time but it won't be that difficult. Wait until the electricity disappears from his gloves and then quickly fly to him and use Spin attack to push him back. Repeat this sequence and defeat the enemy. You also unlock new passage.

In the next tunnel there are big broken cables. Spend a moment to observe them and then fly under or above them when you are sure that you won't touch the cables.

Soon, you reach a hatch with new pulsing objects and green nitro crates. Fly to the upper right corner and start flying when the rotating objects are close to each other. Of course, you must also avoid green crates but destroy the regular one to find additional life. 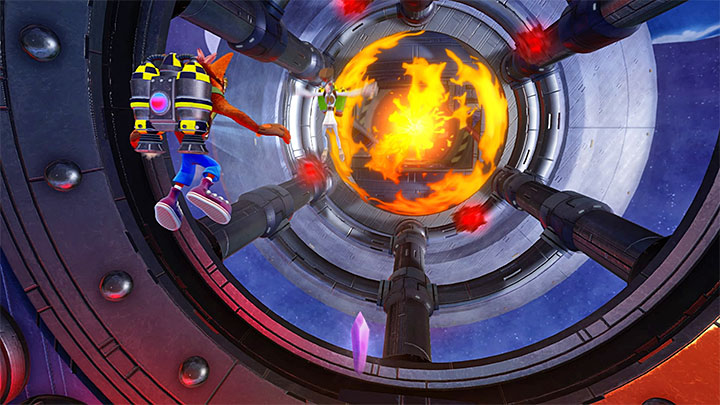 Head to new area guarded by another scientist. This one also needs to be pushed twice by using the Spin attack. By doing that you destroy a force field and unlock a hatch nearby. In the next location you must avoid lasers and nitro crates.

Continue flying and avoid lasers and broken cables. Defeating the last scientist, presented in the picture, is a little bit more difficult. You must fly to him when the pulsing objects are close to the tunnel's walls. Avoid those obstacles once more and get closer to the enemy in order to push him back again.

You can now reach the place where you leave the jet pack. When you stop flying you must hit the exclamation mark crate to detonate all green ones that you have avoided before. Only then you can go to the portal that ends this level.