This is the first stage that takes place in the factory and during it you will encounter new enemies and traps. Avoiding some of the hazards is difficult and requires you to perform each move perfectly. In addition to that you must also do your best during the Death Route because its difficulty is even higher. 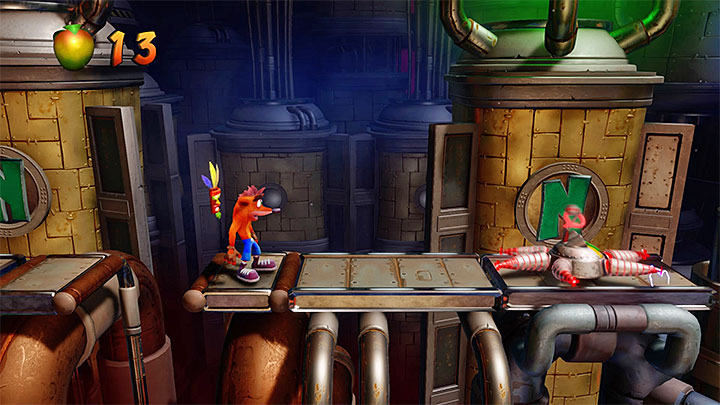 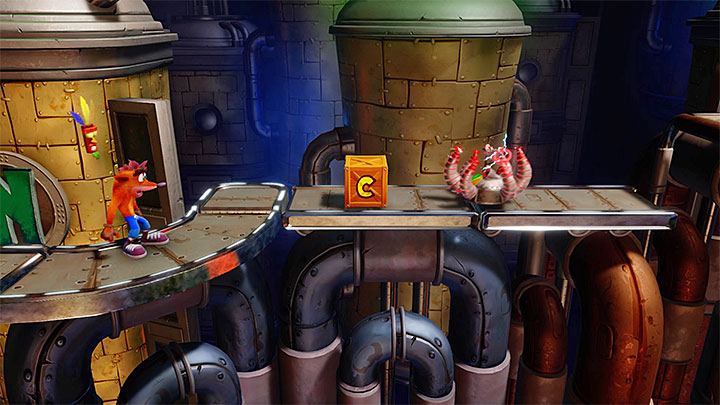 Destroy the first few crates that are near the starting place. Thanks to that you can get, e.g. an Aku Aku mask. Go right and when you avoid a trap get closer to the first robot. The best way to deal with those enemies is to perform a slide. Keep moving right and eliminate similar robots. When you reach a group of working pistons you must wait for the right moment to start running right.

In the next area you can find a different, crawling robot. Those machines have two forms. When its legs are down (example in the picture 1) you can eliminate them by jumping on robots. If the legs are up (example in the picture 2) you must either use slide or Spin attack. Warning - Some robots can stay in one form but you can encounter those that can switch between the forms. In those situations you must use an attack that will not result in Crash's death. You can also avoid those robots by jumping over them but this is not always possible. 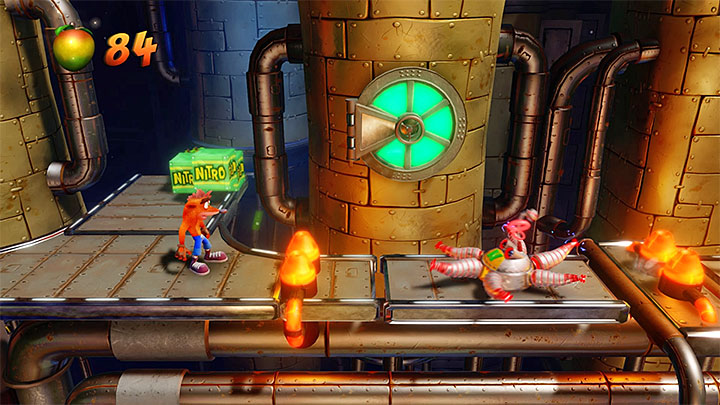 You pass by two new pistons and when you get there you must perform a long jump, preferably after when the left piston is ejected all the way up. Pay attention to new crates that are found a few steps later. You should especially try to jump to the crate with an arrow on the right. Bounce off of it a few times in order to destroy normal crates hanging above.

Keep moving forward, eliminate new robots and avoid being crushed by machines. When you reach the end of the upper platform you must perform a long jump, the one that is done after using a slide move. When you are below you must carefully destroy normal crates located near those that are filled with nitroglycerine.

In the place presented in the picture above you will, for the first time, come across hot pipes. You must avoid touching them at all cost. You must jump on nearby robots when you are sure that you can safely eliminate them by landing on their heads. Soon, you reach a checkpoint and you can find a Purple Gem. 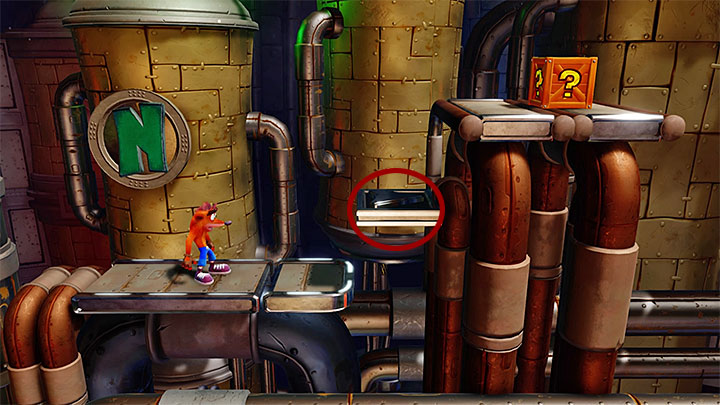 Move into the background and head right. Pass by the platform that leads to the Death Route because if you go there you won't be able to destroy some of the crates on the main path. Keep moving right.

You must watch out for pressure plates like the one presented in the picture above. Standing on any of the plates causes a ball of energy to be shot and it will move in the direction pointed by arrow that is located on the plate. Try to avoid them or, when you stand on one, move from it as fast as you can. However, the energy balls can be neutralized by using Spin attack. 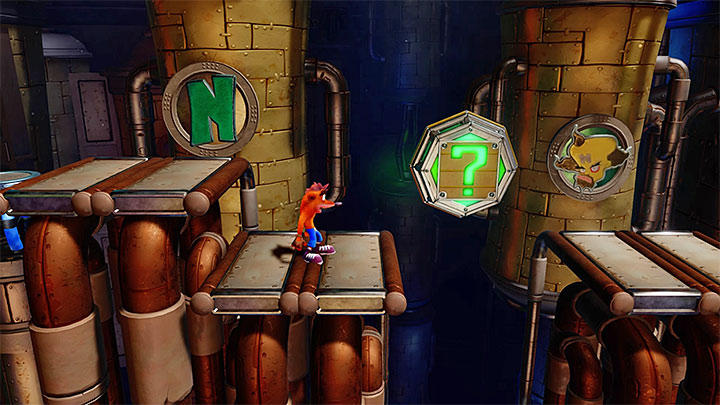 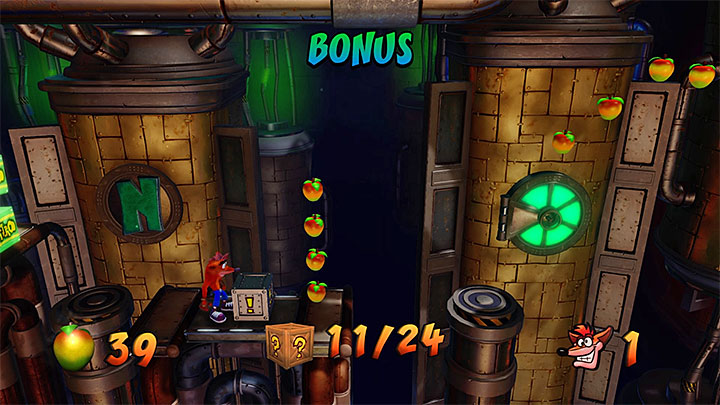 When you are on your way you can take a look at the hole presented in the picture 1. When you jump into it you activate a bonus round. Destroying all 24 crates in this bonus round is quite a feat. First, you must stand on pistons and keep making jumps to the right. Destroy normal crates and, as always, avoid the green ones. Your goal is to reach the crate with an exclamation mark presented in the picture 2. When you hit it you unlock new crates in the part where you start this secret location. Sadly, if you want to reach them you must avoid the nitroglycerine crates again. In some places it can be very problematic but you can make things easier by not destroying all of the normal crates when you move to the right for the first time. This allows you to bounce off of them later.

Warning - An alternative solution for the problem with avoiding the green crates is to find Aku Aku masks in the previous parts of the level. They can protect you from an immediate death when you touch a nitroglycerine crate. 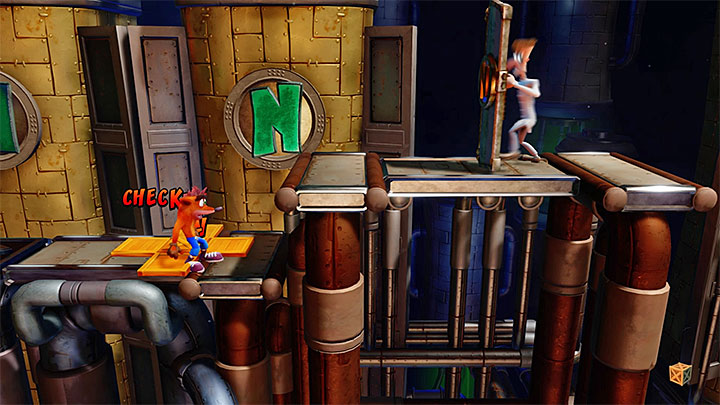 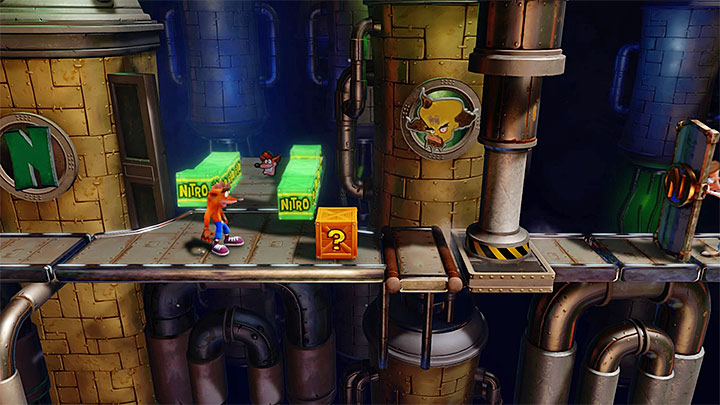 When you leave the bonus round you must keep moving right. Again, you must avoid robots and be careful in locations with pressure plates. Especially in the room that has a group of those plates and you must run on them without stopping. Soon, you will meet first scientist with a shield. He is presented in the picture 1. Every once in a while those enemies perform an attack in which they use their shield to push you back and when you are hit you are sent flying to the left and you will probably die. You can run to them between their attacks and keep using your Spin attack until they are pushed into a trap or an abyss.

Continue walking to the right until you reach an area from the picture 2. Here, you can find additional lives and a single crate. After destroying it you must decide on what you want to do: 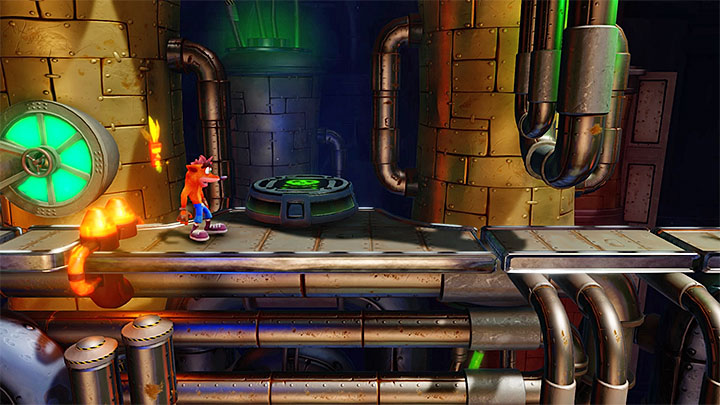 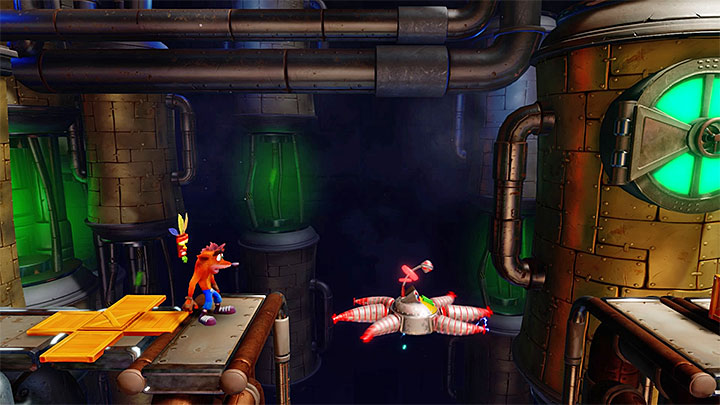 If up to this point you didn't die then in the place that you passed by, picture 1, you can find a platform that will transport Crash on the Death Route. When you get there you must first watch out for pistons (jump on the right one at the right moment) and crates with nitroglycerine. You will also come across scientists with shields. You must push them back skillfully.

Move right and keep avoiding new robots on your way. The picture 2 presents another difficult place. The robot that hangs here keeps changing position of his legs. You must wait for a moment in which you can safely land on him and bounce off of the robot by using a long jump. New pressure plates will start to appear in the later parts of the route. After avoiding them you must go right and prepare yourself for a series of jumps on hanging robots, of course you can do that only when it is completely safe. A Clear Gem can be found on the neighbor ledge.

When you get the clear gem you can bounce off of the new hanging robot and move right. Soon, you reach an alternate exit from this stage but before you use the portal you can hit the exclamation mark crate to detonate all green ones.