This page contains a detailed description of unlocking the bronze trophy called "Komodo No Mo" in Crash Bandicoot 2: Cortex Strikes Back for PlayStation 4. This trophy is awarded for defeating the Komodo Brothers. The fight starts after you've completed the levels of the second portal room. 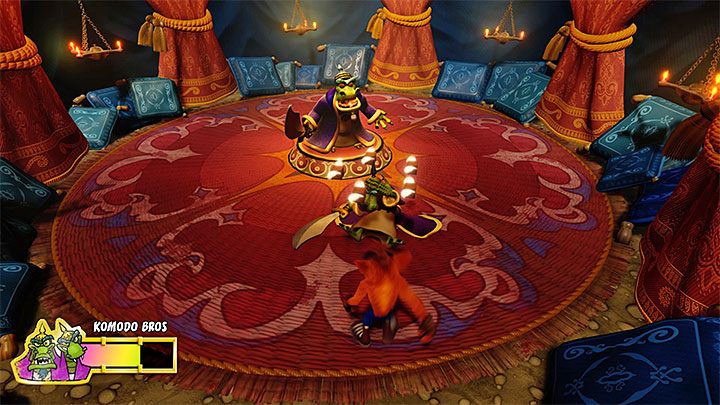 This duel consists of two phases that start interchangeably. In the first one, one of the bosses moves around the level, rotating at high speed around his own axis. Avoid him by staying at a safe distance. Wait until the boss gets dizzy (the above image) and then run up to him and strike the Spin attack. It doesn't have to be coupled with moving the analog stick to any particular side since the struck enemy will bounce off the arena's wall and hit the boss in the middle. This action takes one energy points form the Komodo brothers. 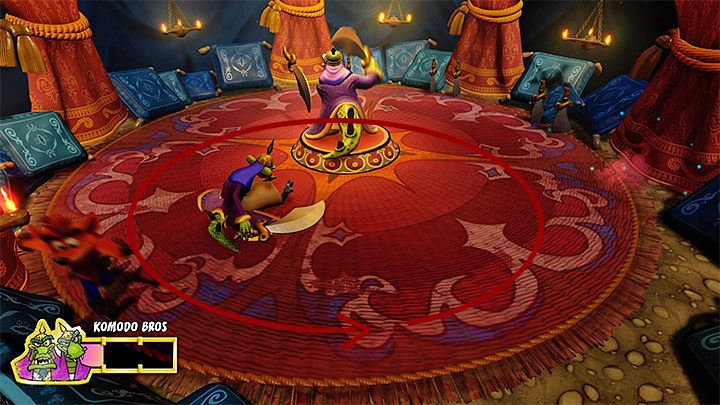 In the second phase, the opponent in the middle of the room will start attacking and throwing swords. In order to avoid taking damage, start running counterclockwise around the arena. Try to stay behind the attacking enemy's back and don't hit his brother, who should still be stunned.

The remaining part of the battle is a repetition of the above actions. Attack the first boss when he gets dizzy and avoid the second boss' ranged attacks until he finishes his series of throws. Taking three energy points from the Komodo brothers grants you victory.