In this chapter you can find information about the fight with Dr. Neo Cortex in Crash Bandicoot 2: Cortex Strikes Back which is a part of Crash Bandicoot N. Sane Trilogy collection. Just like in the previous game, Cortex is the final boss again and you can face him when you find all Purple Gems in levels that can be accessed from High-Tech Warp Room. 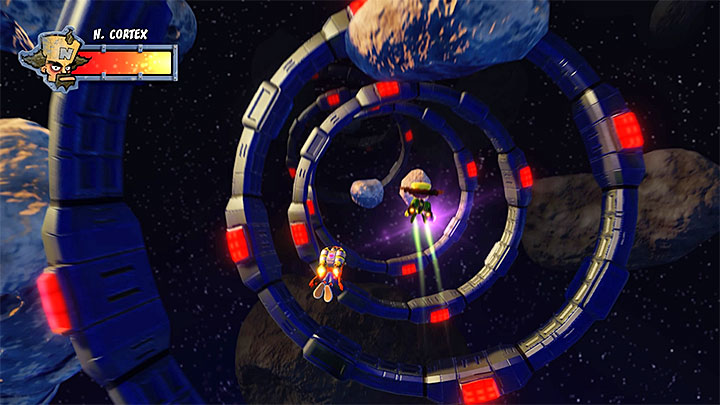 The fight with Neo Cortex is similar to a chase because he keeps running away and won't attack Crash. Another important information is that you can't allow Neo Cortex to escape with Gems because this will fail the level. Luckily, you have enough time to catch him.

In this stage you must fly perfectly with a jet pack. During your flight you must notice small asteroids and mines when they are far away from you and move to the sides or up/down in order to avoid hitting them. Touching an obstacle doesn't mean that you die immediately but Cortex can get farther away which increases probability that he will escape. 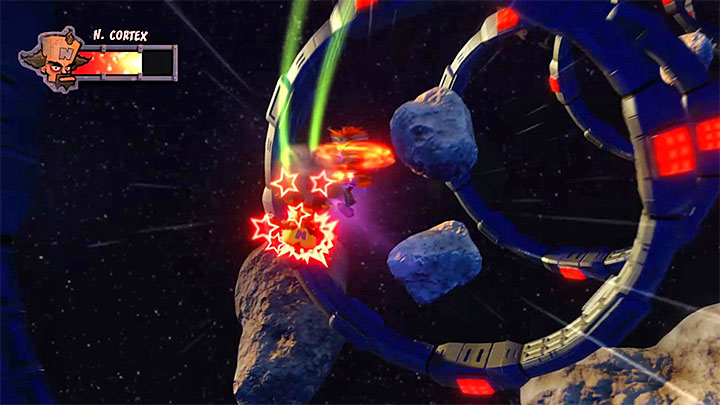 Crash will gradually get closer and closer to Cortex. When you get right behind him you must quickly press Square to use the Spin attack. If you succeed in hitting him the boss will lose one health point (the picture above). In order to complete this level you must attack Neo Cortex three times.

Warning - When you complete all levels you receive a gift, Speed Shoes. They allow you to move faster by holding the R2 button. They are useful in stages that have a time limit because you can get much better results.