Note - You can score all rewards during the first playthrough.

The level is not that long, but some of the sections can prove to be very frustrating. The biggest problem comes from small hosts of bees that has to be eliminated at once or fled by running straight ahead, as the new opponent is tougher than the single bees encountered in one of the previous levels. Aside from the new opponents, you may have some difficulties reaching the purple gem, but fortunately you can skip the rest of the secret path after you've managed to pick up the collectible. 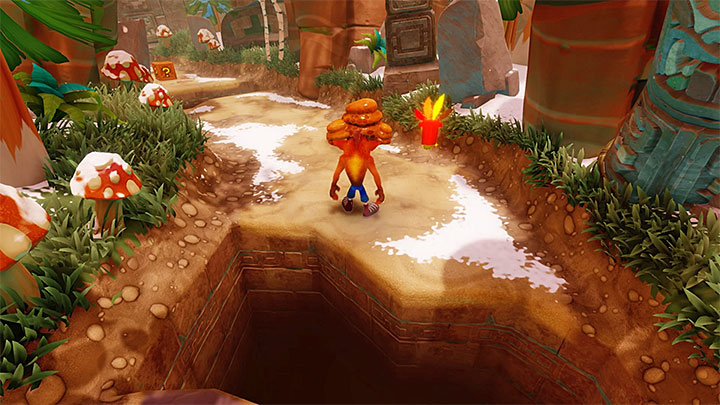 Begin running in a straight line and avoid enemies equipped with hammers and plants spewing explosive seeds. However, the biggest obstacle in this mission are large beehives, like the ones shown in the above picture. When you pass by each beehive, as many as five bees will fly out of it. You might get stung and die instantly.

Whenever possible, try to get far away from the beehives - the bees chasing Crash might lose interest and go back to the hive. When you notice you are about to be attacked, try to delay the moment of the Spin attack as much as you can. This might increase your chances of eliminating all enemies at once. But don't try to launch separate attacks, because between them you will be vulnerable. Apart from using Spin attacks, remember that you can burrow into the ground in the selected spots. Do it even if you'll have to jump over a precipice a couple of steps later. 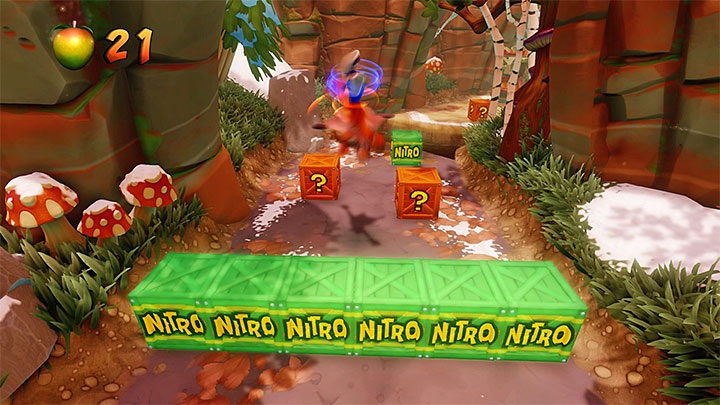 Some beehives are situated in problematic places. In the case of the hive situated next to a live gate, you must slide under the electrical discharge and immediately jump so as not to stay too long in this location. Another beehive is situated next to a place containing many nitro boxes. Here use the burrowing option, but remember that you can't crash into the green boxes and jump out for short moments to avoid them in a normal way (example on the picture above).

Next, bypass the totem and wait for the right moment to run through the new gate when the electric discharge disappears for a moment. There's another gate a bit further. You must slide underneath it and make the jump immediately so as not to fall in the precipice.

Next, you will go through locations where you have to avoid both bees and enemies with hammers. In such situations try to deal with the latter first and then burrow beneath the ground immediately. 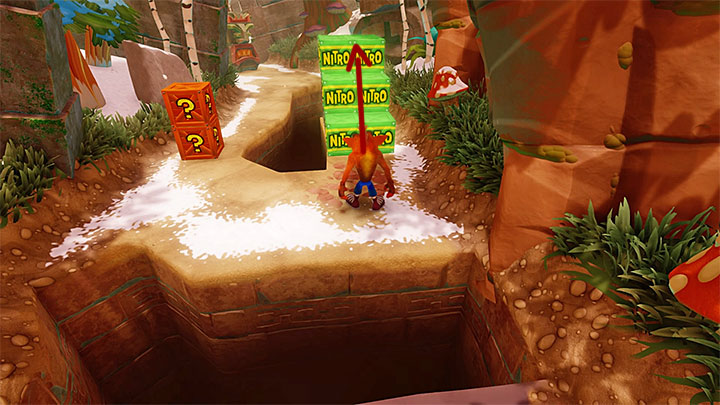 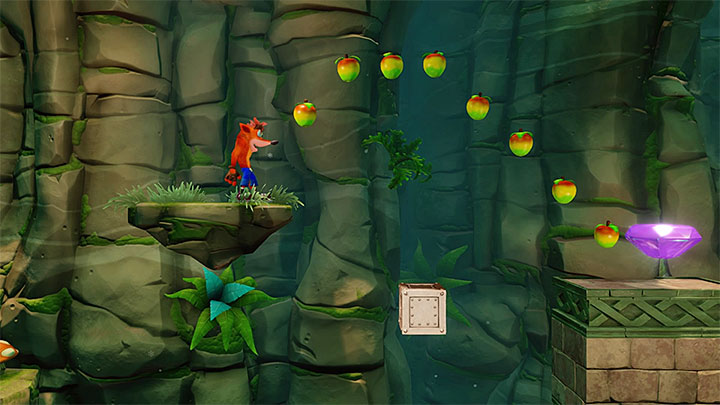 Continue the journey until you reach the green boxes that form a staircase (shown on picture 1). It is a secret passage to an extra location of this level - there's no nitro n the boxes, you can jump on them without any worry. Once you reach the hidden area, go right. When needed, use slides combined with jumps. Once you land on a bigger shelf, quickly get rid of moles. A couple more jumps and you can reach the shelf with a Purple Gem (shown on picture 2 above).

Now, you can do two things: you can either die and return to the start or proceed with your exploration. By choosing the latter option you'll gain nothing though, as there are no crates or other valuable objects in the area. If you do, however, beware of the hunters and their slow bullets. You'll also need to avoid armadillos (you can jump on them), turtles, and green crates of nitro (this time they're real), under which you may have to slide. 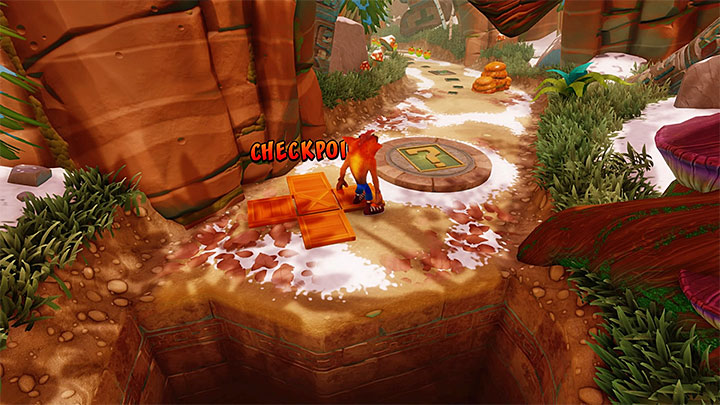 After you're back on the main path, proceed, avoiding further totems, bee swarms, and spitting plants. You'll also get a chance to run across green platforms, so definitely take it - it will enable you to escape from a bee swarm. After you're done sprinting, don't forget to execute a perfect slide under a gate, followed by a jump.

Your next stop is the round plate with the question mark, shown on the screenshot, next to one of the checkpoints. This bonus level will include 34 crates to destroy. Avoid the green ones in the beginning and go right, destroying the normal ones, which are easily available. Don't worry about the crates that are left on the green nitro crates. You don't have to smash them individually, as they will be taken care of once you detonate all the green crates remotely later on.

Resume your journey, once again taking the route with the green tiles. In one of the later areas, you'll encounter a purple crystal. At the end of the level, hit the crate with an exclamation mark, detonating all the "missing" crates. You can now exit through the portal, completing the level.

Note - having completed this level, you'll be facing a boss fight with Nitrus Gin. The battle is described in a separate chapter of our guide.