An unusually large amount of crates suggests that you are standing before a long level. Nevertheless, its business as usual - the quest to acquire the Clear Gem will see you visit both the bonus area and the Death Route. Pay extra attention to those areas where Crash is skidding, as most of the frozen areas neighbor deadly traps. 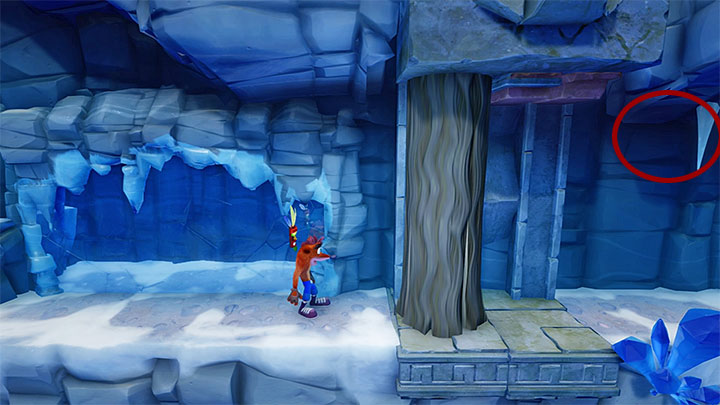 Clear the group of crates found at the beginning of the stage as one of them contain an Aku Aku mask which may save you from some of the dangers ahead. Watch out for sliding penguins and continue until you've reached an area with an unusual installation topped with additional crates. Take your time to clear the area from to wooden crates (8 in total).

Continue moving forward by clearing two chasms and start skating through the ice. Use your spin attack to dispose of new seals approaching from up ahead. Clear two icy ledges ahead by timing your jump from the first ledge and continue to a round platform that will take you to the first checkpoint.

You'll be taken to a linear section. Start travelling right to find two different crushers found next to each other. Run through the first one and perform a slide to get past the second one. Stop right after the action and let the icicles drop from the ceiling right next to you. The next two crushers are in a reverse sequence - use the slide first and run past the wooden crusher. As previously, watch out for the icicles beyond the crushers. 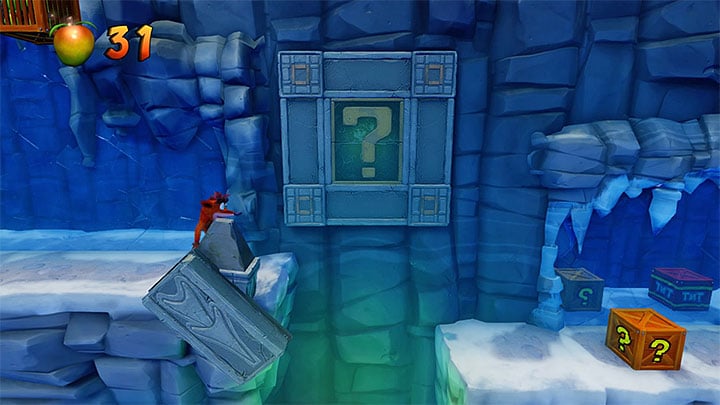 Run past the caving bridge and destroy the four chests arranged in a pyramid-like fashion. Start by taking care of the upper ones, as you won't be able to reach them if the bottom ones are destroyed. Proceed forward and jump into the marked chasm to begin the bonus section.

The bonus area consists of 31 crates. Start moving right and activate the TNT crates found along the way - the crates destroyed by other means also count towards your score. As previously, start with the highest crate in order to destroy it before you take care of the crates below.

Approach the encountered TNT crate just enough for the above icicles to fall down and activate the charge. Proceed the same with other icicles encountered in this area. 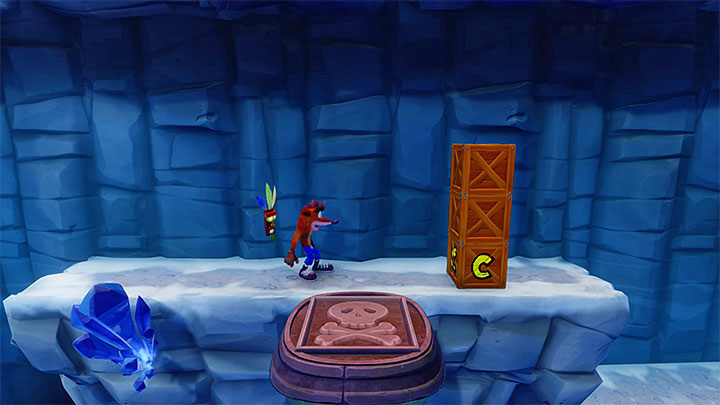 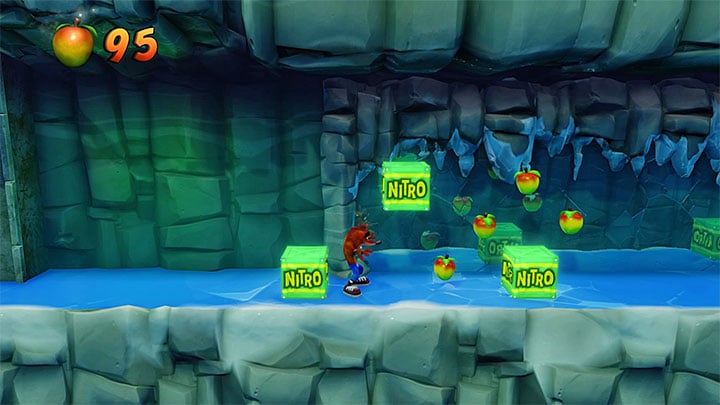 You'll encounter a porcupine who is guarding the bottom ledge. Destroy the chests to provoke the opponent, then move left to get out of his range and wait for him to let go of his spikes. Now, use the opportunity to make a slide and get rid of him. This is a mandatory step, as the enemy blocks access to a detonator crate. Hit the crate to unlock additional metal crates which will appear at the end of the upper ledge.

Use the metal stairs and continue travelling right. If you haven't lost a life up to this point, you can now use the platform (screenshot 1 - activate the checkpoint first) to begin the Death Route. The surface in this section is almost completely frozen - you'll need to time your actions and maintain a steady momentum to get past all the obstacles ahead, which include green crates, crushers, icicles, opponents, or chasms. The most difficult area is shown on screenshot 2 - you'll need to get past a few inconveniently placed green crates. Moreover, two apple crates in the middle of the section are disabled, and can only be activated through a detonator chest placed at the end of the level - if your goal is to score the Clear Gem #1 (awarded for destroying all the crates), you'll need to backtrack to the initial part of the level. If you are ready, continue to the end of the level and pick-up Clear Gem #2, which is hanging in mid-air.

Note - Getting past the Death Route is much easier if you manage to pick-up three Aku Aku masks beforehand. The masks offer temporary invulnerability, enabling you to simply rush through the nitro crates. 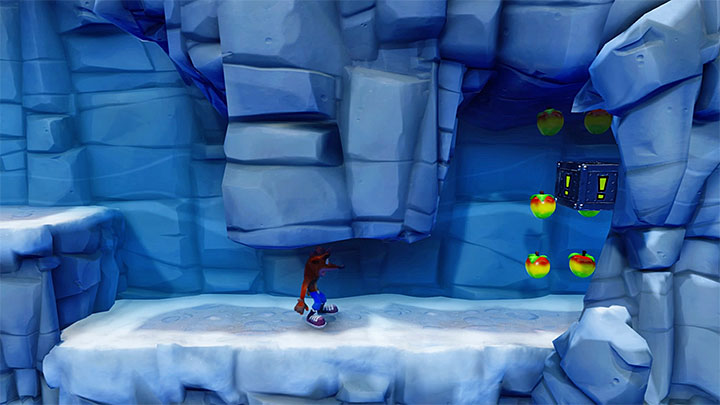 Continue moving right. Your task is to slide down a few incline ramps - stick to the left wall in order to reach the crates found below the final ramp. Make your way right by defeating additional penguins while clearing encountered crates. Focus on getting past the encountered crushers, as the path is covered in ice, and destroy the second porcupine when he discards his spikes.

Make a long jump to reach the lower ledge containing a checkpoint. Continue - take a look at metal crates hidden in an inner part of the level (one of them is shown on the screenshot above). Make an attempt to hit them all at once using your spin attack. Proceed down the path and continue through a new set of green crates - get past them or use your attacks to throw the nearby penguins onto the crates. You'll encounter a second niche - destroy the crates but skip the final crate, as it will be destroyed thanks to a detonator crate found further ahead.

Start running and perform 4 slides in short succession to get past a set of crushers that will attempt to crush our hero if caught. You'll reach a larger hole - use it to proceed to the next part of the level. 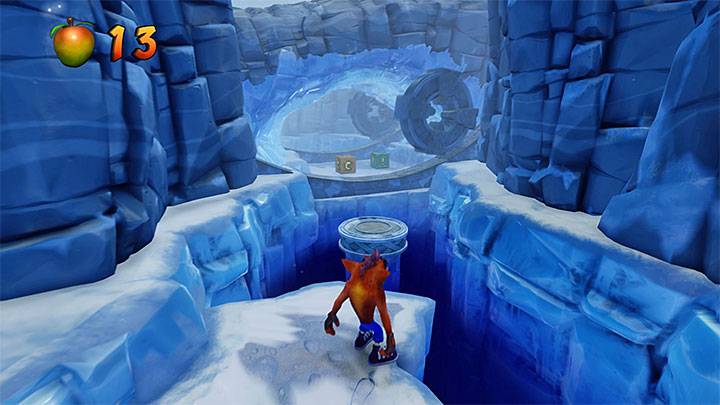 You'll begin a "classic" section. Start by getting past a set of green chests placed on the second ledge and continue to pick-up the purple crystal.

Jump on a upper ledge while skipping a nearby porcupine and continue by avoiding the rolling stones, especially in the area shown on the screenshot above - the middle platform will tumble down after a few seconds. Make sure to hit the detonator crate, as it will enable you to get rid of the remaining nitro crates.

Complete a short climb and go through the two rolling stones by making the jump when the stones are back to the opposite sides - the portal leading back to the warp room is just behind them.