Note - As in the case of the previous levels, both secrets call for separate playthroughs - dedicate the first one to clearing the crates and completing the Death Route without dying. The second playthrough should be focused on reaching the secret portal which unfortunately is located at the end of the level.

Diggin' It is characteristic for introducing new opponents - avoiding some of their attacks can prove to be quite problematic. Fortunately, some of the areas allow Crash to dive into the ground and continue moving while being protected from most attacks. Avoid careless running, as the level contains a large number of secrets which can be easily missed if the player is not cautious. 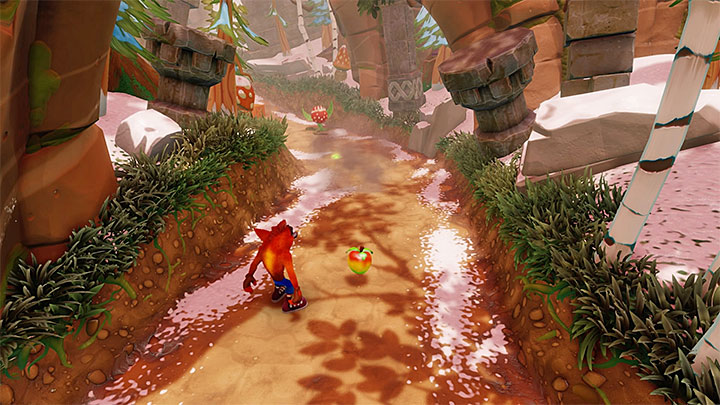 You'll encounter the first opponent shortly after initiating the stage - red carnivorous plants that spew exploding seeds. Avoid the projectiles by avoiding the blast zone or by waiting for the when the enemy prepares another projectile. The first variant is more recommended, as the projectiles often land e.g. on narrow ledges or between other obstacles. Nevertheless, don't attempt to attack the plants using your melee attacks, as they will hide and put up spikes that forbade you from hitting them.

Digging it also marks the return of the mines which you've had the opportunity to encounter in escape stages from the previous warp rooms. As in the previous cases, try to avoid setting them off. Moreover, you'll encounter mobile totems - you can bypass them by tracing the movement of each totem and taking a direction that is currently safe.

Continue your journey. You can make use of the green boost plates, but they are utilized best when attempting to win a time challenge. 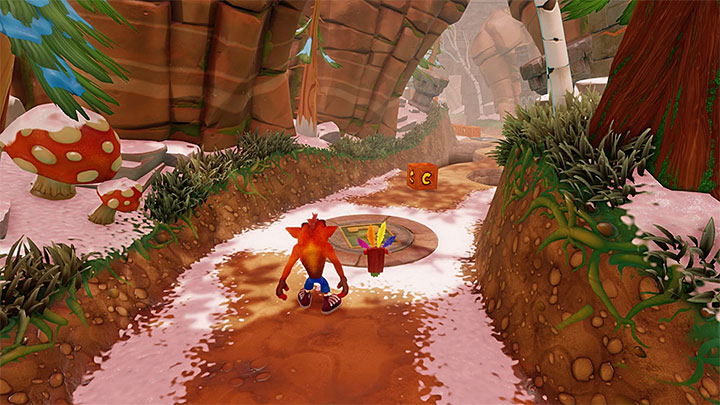 Activate the checkpoint and destroy an Aku Aku chest that neighbors two nitro chests. The path forward is riddled with electrical fences - the first two are without the bottom ray and can be cleared by crawling, but the third one (and the remaining one) are disabled temporarily - wait for an opportune moment and get past them safely.

The main road leads to the bonus plate shown on the screenshot above. Begin the bonus round by clearing the crates on the ledge above Crash (use the springboard nearby) and by performing a belly flop on a set of invulnerable crates. Use the next springboard to perform two jumps, as there is a second crate fixed above the first one. Continue the bonus round by clearing the stacks (activate the TNT charges by removing the crates below or by performing a spin attack) and by scaling a row of nitro chests (you can detonate them in the further part of the section) that separate you from the exit platform. 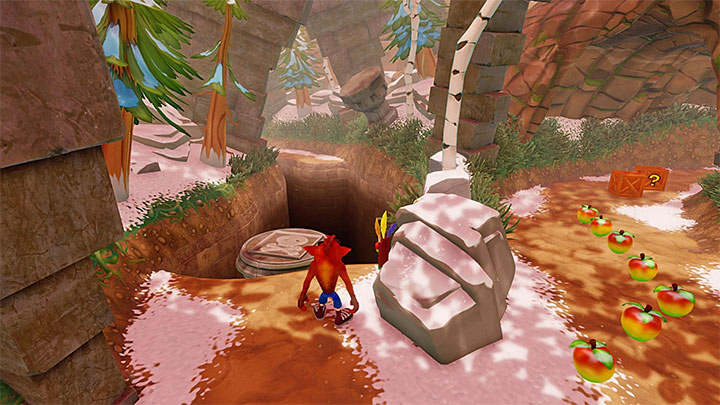 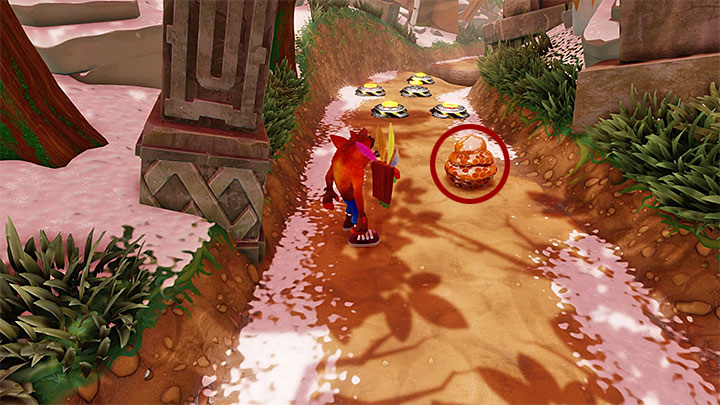 If you've managed to complete the bonus round, make your way forward and stop by the junction shown on screenshot 1. If you've haven't lost a life yet, the plate on you left will be active - step on it to begin the Death Route. The beginning of the bonus section sees you jump between nitro chests (stay close to the left side of the road).

You'll soon approach the first beehive (shown on screenshot 2). Move past it - the hive will release a single bee. Get rid of it by utilizing a perfectly timed spin attack, otherwise Crash will be stung, losing a life in progress (interestingly enough, such event is rewarded with a trophy (Buzz Off!)).

Get past the mines and continue moving forward. The path before you is filled with a number of beehives and bomb plants, while some of the chasms ahead can only be scaled by utilizing a long jump (perform a slide to gain momentum then press the jump button). Soon, You'll pick up the Clear Gem from one of the platforms. Follow the path before you to find a platform that will take you back to the level area, ending the Death Route. Move forward a bit and return to the junction to start exploring the right corridor (described below) 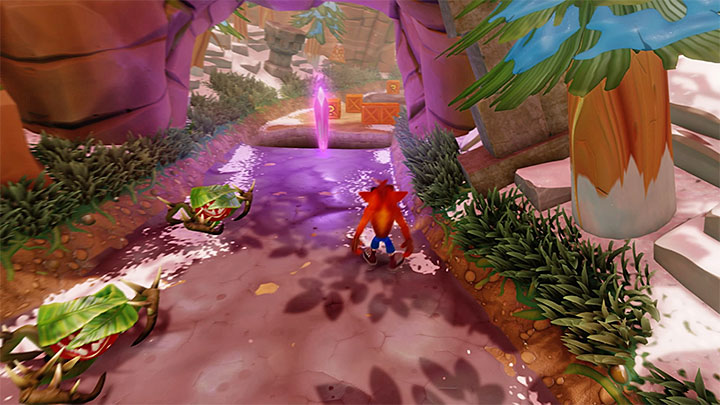 You can also choose the right path, which is the recommended choice if you are planning to reach the remaining crates. You'll encounter the same obstacles. Some of the beehives appear next to the electrical fences, so make an attempt to clear the gate without slowing down, as the bee will catch up to you if you are caught before the fence.

Continue travelling beyond the checkpoint until you've reached the area shown on the screenshot above. From now on, you can press the attack button to bury yourself in the ground and start travelling without being harassed by plants and bees. Watch out, as you are still vulnerable to green crates and have to emerge back to the surface in order to get through chasms. Continue down the path to find a purple gem. 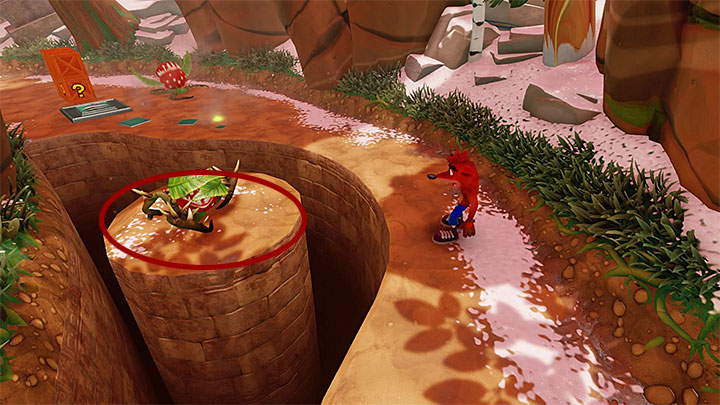 You'll soon encounter the fork that leads back from the death route. Continue moving forward and take a moment to look at the plant shown on the screenshot above, as it conceals a secret portal.

If you are in progress of your first playthrough, skip the portal and reach the end of the level. Return to the area during your second playthrough. If you are ready, perform a belly flop (jump on the plant and press Circle midair) to destroy the plant. You'll be taken to a portal leading to a previously unavailable part of Road to Ruin. The action is rewarded with a trophy (The Flora Flop). 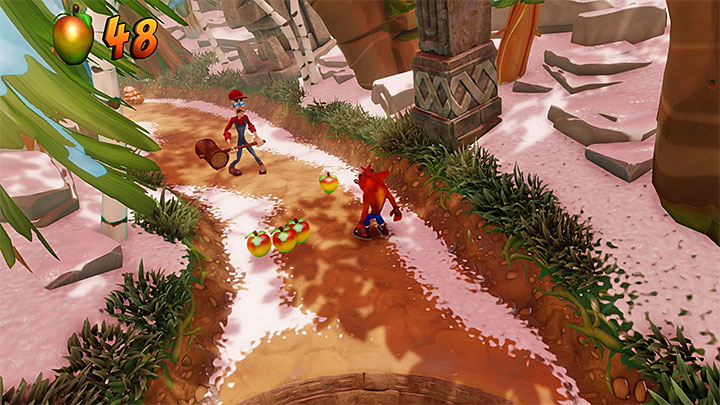 Continue moving forward. Hit the encountered detonator chest to clear the area of all nitro chests. You'll encounter a beehive right next to a minefield - you'll have to get past the mines while being chased by the nagging insects.

Soon you'll encounter a first human opponent armed with a hammer that is shown on the screenshot above. You need to close the distance between you and the enemy as fast as you can and use your spin attack before the human manages to swing the hammer and kill Crash. Warning - this type of enemy can hit your hero while he is underground.

Get past the additional beehives and take care of the last human opponent to unlock the exit portal.