In this stage, you have to escape. Instead of escaping from large boulders, you will be running from a huge bear. This level is difficult, because there are many spots where you have to take a perfect and quick action, without knowing what's ahead. In fact, it will be impossible to deal with all of the traps at the first take. Also, the secret area is problematic, where you have to be precise, quick and patient. 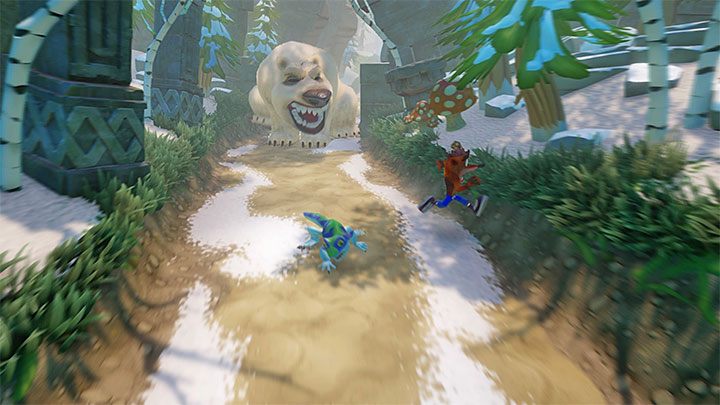 The first chase starts right after you leave into the open. Just like in the case of stages where you have escaped from boulders, keep the bear at a distance. Along your path, avoid pits and mines, green nitroglycerine crates, electrified gates where you have to slide and hurdles that you can either jump over or smash with Spin attacks (the latter is a better idea, because this will save you time).

A bit ahead, you should also watch out for the lizard shown in the above screenshot. You can easily get around it, but when it comes to the next ones (ones in groups)m it is much better to jump onto them and not stop anywhere. 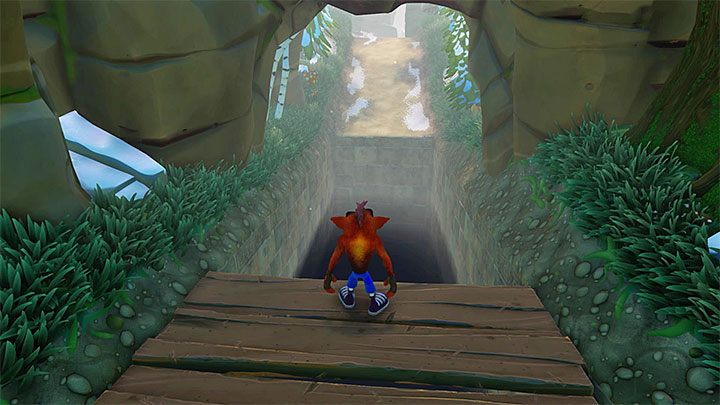 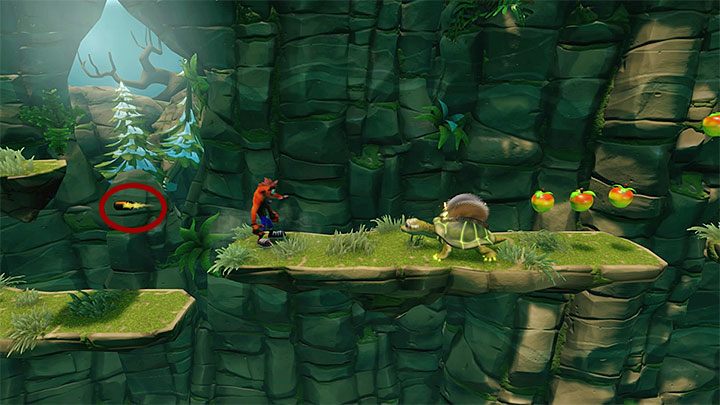 Right after you reach the first checkpoint, you will start the second chase scene. In this phase, use the green pressure plates that speed you up and will allow you to gain distance from the bear. Also, watch out where there are three lizards and eliminate any of them by jumping onto it.

Soon, you will reach a wooden bridge and the bear will fall into a large hole. Stop, approach the hole (screenshot 1) and jump down, because you will find a secret area there. Now, you will have to play a very difficult sequence, where you will have to avoid hunters. You can eliminate them by jumping onto them, but you also have to avoid bullets whizzing by (screenshot 2). Make sure that you take long jumps over larger pits and watch out around turtles.

In the next part of this area, hit the crate with the exclamation mark and watch out for the armored armadillos (you can jump onto them, but this does not kill them), and for hedgehogs. Additionally, you should be careful near nitroglycerine crates. Try to collect Aku Aku masks, because they make you temporarily invincible, which will aid you against the most difficult traps. 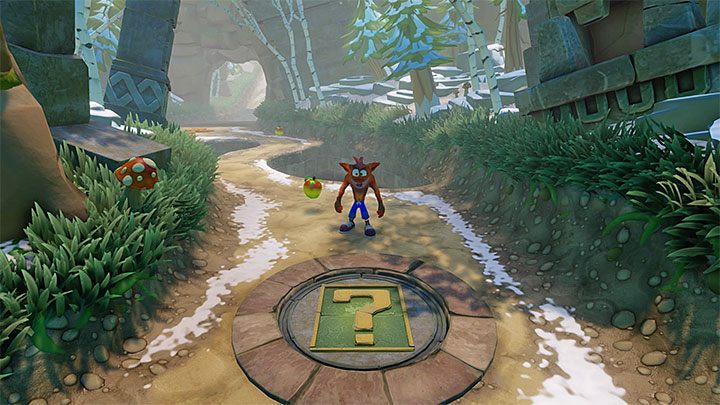 Regardless of whether you have completed the secret location, you will be able to collect the violet crystal from the main path and you will reach the pressure plate shown in the above screenshot which will take you to the bonus round.

Head right but, after you reach crate frames, get back and take a long jump towards one of the ledges above. Here, go left to reach a metal crate with the exclamation mark. Again, go right. Take a perfect jump off the crate with arrow, to fly over the green crates. Do not worry that you cannot smash them now,. Right after you complete the bonus round, you will find a crate with the exclamation mark on the main path and hitting it will blow up the green crates. 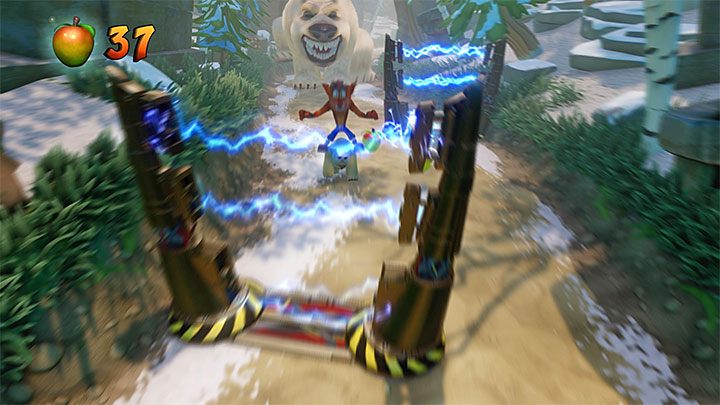 Soon, you will reach a checkpoint, which will start the third bear chase. Use the green plates to your aid but, right after you are boosted for the second time, take a jump to avoid one of the lizards. Apart from that, watch out while getting through the hurdles, because there is a gate with discharges right past one of them. Smash the hurdle with Spin attack and slide quickly.

After you reach the next checkpoint, Crash will jump onto the cub and this will start the last part of the chase. While escaping, watch out for the TNT crates on the left, for the spot where you have to take a diagonal jump and new electrified gates (the above screenshot) around which you will have to slalom (fortunately, colliding with the gate's frame does not end in instant death). At the end of the stage, you will be launched into the air, onto a distant ledge. 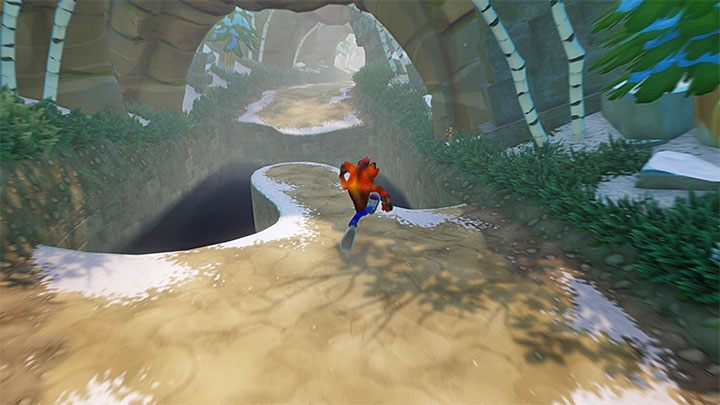 If you want to end this stage now, go towards the bottom of the screen and reach the portal (and collect the clear gem, if you have smashed all the crates).

As an alternative, you can try to unlock the secret stage of Totally Bear. To do this, you will have to return to the pit shown in the above screenshot (which is where the bear fell). You have to perform a PERFECT slide (Circle) and jump (X)m thanks to which you will land on the path where the chase ended. Return to the cub, mount it and you will be warped into the room in the basement, where you obtain the No Bear Left Behind trophy. The walkthrough for the bonus Totally Bear stage can be found in a separate part of the guide.

Note - After you end this stage, you will have to fight a boss battle with Tiny Tiger. The battle has been described in a separate part of the guide.