Note - It is impossible to smash all of the crates here the first time around. You first have to wait until you gain access to Diggin' It in the fourth portal room (Alpine Warp Room).

In Diggin' It, there is a secret passage that will take you back to Road to Ruin. To learn more, see the information at the bottom of this page, or the walkthrough for Diggin' It.

Just like its name suggests, this level takes place in the ruins and its difficulty level is higher. First of all, you will be traveling over pits for the whole time and, as a result, even the slightest mistake may cost you life. Additionally, there are many traps here, as well as a demanding Death Route. 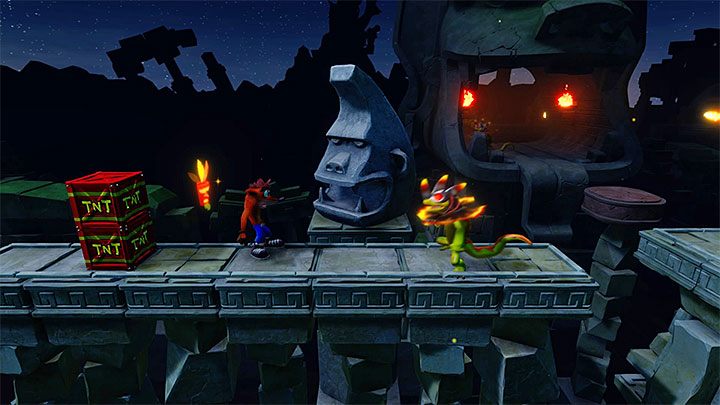 Head up the screen and watch out for the brown stone ledges appearing at the beginning of the stage. Soon after you land on them, they will start to crumble, The white oversized mice can be easily eliminated, because they do not have any special attacks. Smash the crates and jump off the second mouse on the narrow ledge.

Head right and eliminate all the mice along your way. It is a good idea to jump off the last mouse, thanks to which you will first be able to smash the crate with the mask neighboring with TNT crates. To the right, there is the first lizard (the above screenshot). You should avoid them, or eliminate them with slides. Jump over onto the ledge on the right, where there is the checkpoint. 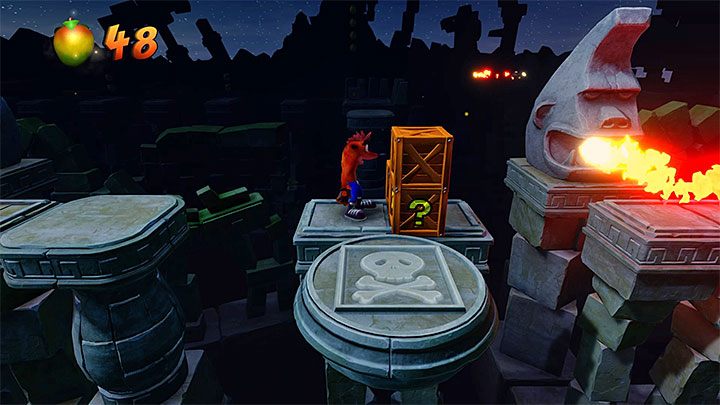 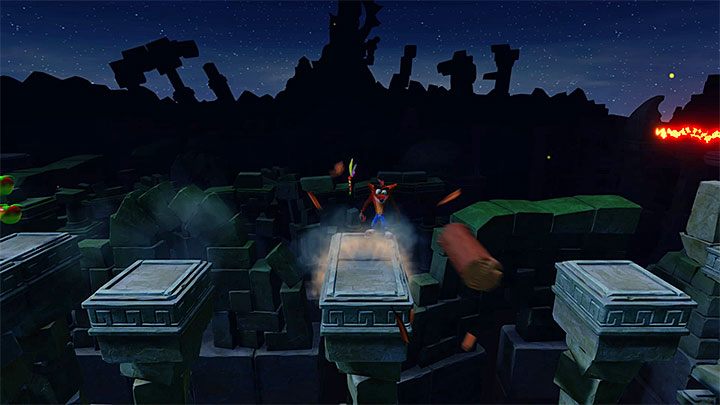 Head towards the upper edge of the screen again and avoid the lizard. Go right, deal with one more lizard and approach the spot with bursting flames. Get around it. A bit ahead, there is a pressure plate to the Death Route, shown in screenshot 1. It will be active only if you have not died, so far.

The Route is difficult. Start by jumping off the crate with the arrow. Head left and be prepared to jump over rolling logs similar to the one shown in screenshot 2. You can jump over them, smash them with Spin attack, or head deeper into the screen to let them roll by. Spin-attack then gorilla that has been throwing the logs.

In the next part, you will have to jump onto moving platforms, After that, go right and watch out for more rolling logs. Additionally, you have to remember here that you cannot stop on the brown poles. Deflect the logs either in mid-air, or while standing on stable platforms. Eliminate the gorilla and perform a slide followed by jump to land onto the swaying ledge on the right. Finally, you have to avoid the flames, but this is easy. You will soon reach the clear crystal. 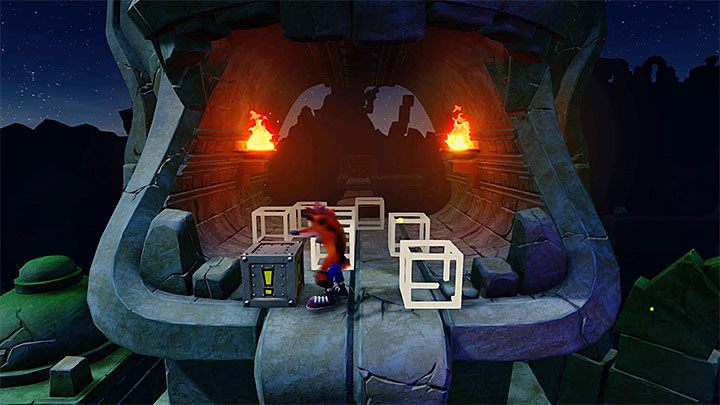 If you have not completed the Death Route, go right. Avoid the flames and the collapsing ledges. Additionally, you will run into a lizard. If, on the other hand, you have completed the Route, head down the screen after you return to the main part of the ruins. In both cases, you will reach a checkpoint and the violet crystal right next to it. Around, there also is an area with a crate with the exclamation mark (shown in the above screenshot). Hit it for regular destructible crates to appear.

Keep going along the ruins. You will encounter mice and platforms that may collapse. Unlock the next checkpoint and approach the upper path. You have to wait for the flames to disappear to continue. 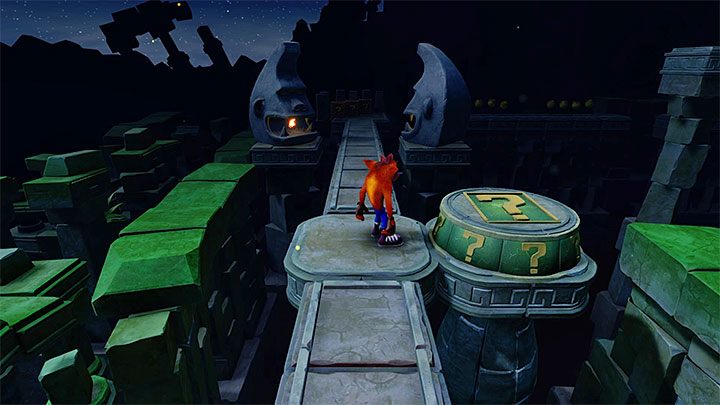 Right past the fire trap, you will find a pressure plate with the question mark shown in the above screenshot. Just like any other, it will take you to the bonus round. In the round, there are 13 crates to destroy and first, you will have to reach the metal ones with exclamation marks bundled together. After you hit four of them, go right and smash the first crate that you encounter. The remaining 12 crates have been placed on two stable ledges and there are no problems smashing them.

After you return to the main part of the ruins, approach the two heads spitting fire and start running after the flames start to disappear (slide, if necessary). 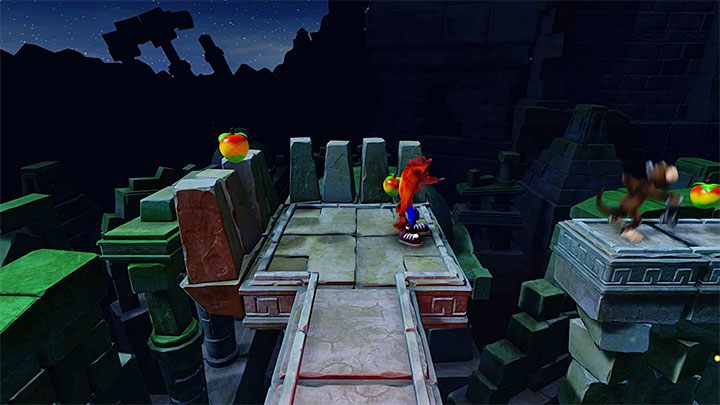 Before you jump onto the ledge on the right, shown in the above screenshot, wait for the monkey there to jump right, because you can easily die after bumping into one. Quickly, follow the monkey and eliminate it with Spin attack.

Jump off the mouse and land on the TNT crates. Jump over the lizard at the right moment. After you reach the corner, hit the crate (it will blow up the green ones) and head deeper into the screen. There, you will find yet another monkey and just as you did earlier, eliminate it with Spin attack. At the same time, watch out for the crumbling ledges. A bit ahead, there is a corridor to the end portal. 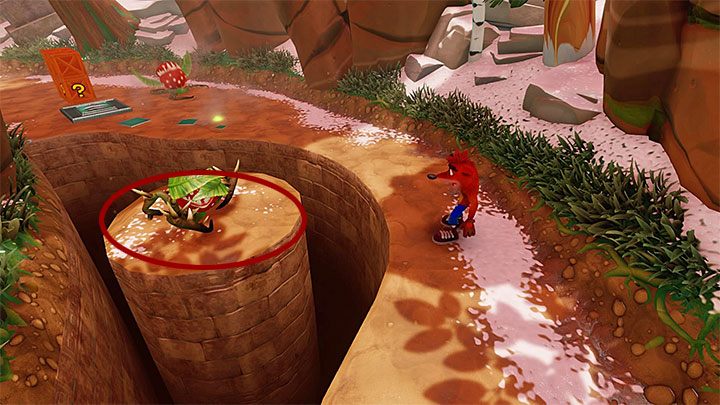 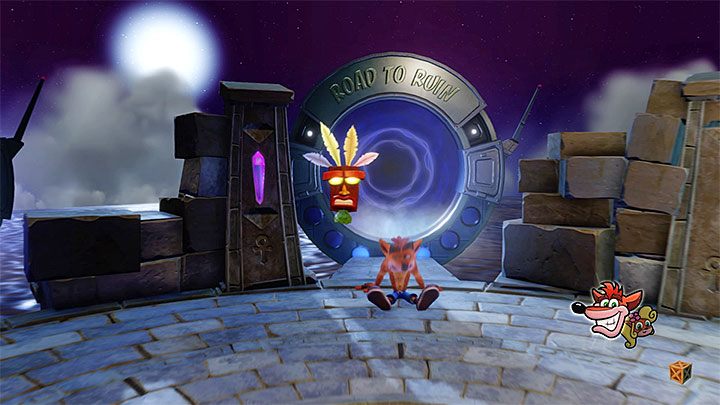 It has already been mentioned that, in Road to Ruin, you cannot smash all the crates during the first play. Before you can do that, you have to progress to the fourth room with portals (Alpine Warp Room) and start Diggin' It from there. At the end of that stage, note the spitting plant on the left shown in screenshot 1. Approach it and jump towards it. In mid-air, press Circle to body-slam it. This will destroy the plant and unlock the secret portal. You will travel to the secret room in the basement (screenshot 2) and here, you can use the portal to travel to the inaccessible part of Road to Ruin. 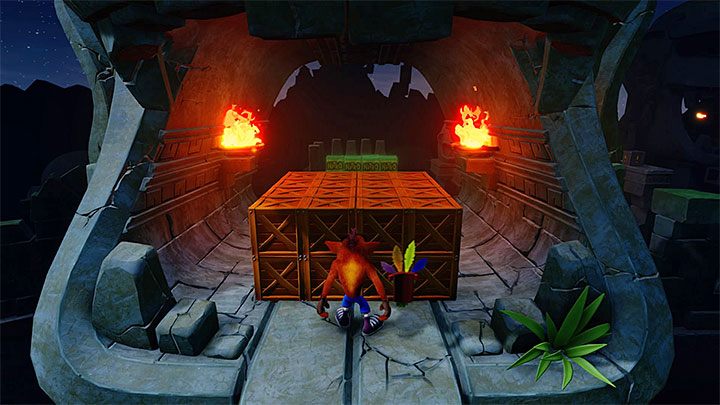 After you cross the portal, jump on the poles. You will reach the bunch of crates shown in the above screenshot. Do not haste to destroy them, e.g. with Spin attack, because one of them is a TNT crate and you can cause a premature explosion. It is best to jump over the crates and co9llect extra lives. 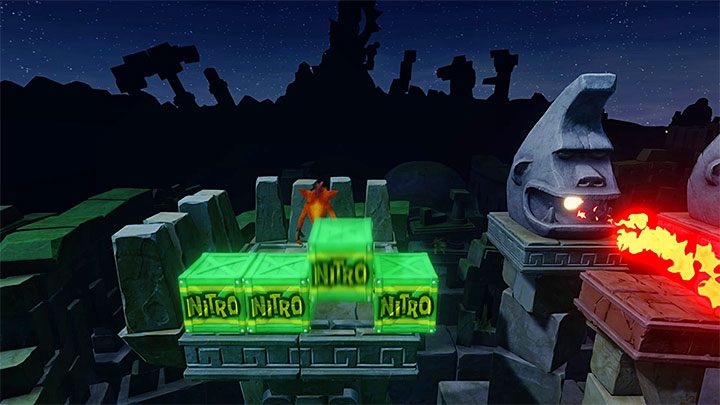 Head on and stop on the small ledge neighboring the four nitroglycerine crates. Take a long jump here, over the crates. So, first slide and quickly tap the jump button. This way, you will land in a safe spot (the above screenshot).

Move down a little and go right. You have to wait for the opportune moment to take a series of jumps, combined with avoiding the flames by the two large heads. Stop by the ledge, on which there is a crate with the exclamation mark. Hitting the crate will unlock the passage. You now get to the spot where you have started this level the first time around. Thanks to this, you can try to find and smash all of the crates required for one of the clear gems.