This is another stage in the sewers. There are several new elements here, but you should be already familiar with the majority of enemies and traps. Try to follow the below walkthrough, because taking the wrong path may result in missing some of the crates required for the clear gems. 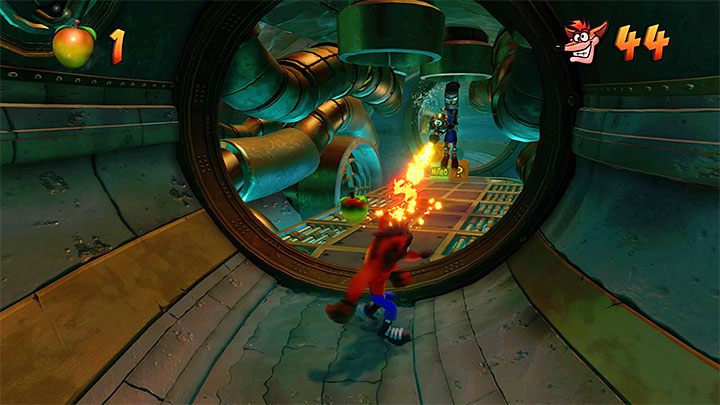 After the stage starts, walk around the nitroglycerine crate and the robots. Soon, you will encounter an opponent armed with a flame thrower (the above screenshot). Do not move until he stops throwing flames and only after, get around him or eliminate him using the Spin attack in mid-air.

Here, get through the tunnel with robots and stop by the reservoir with the eel. It is best to smsh the crates on the sides here and then jump onto the floating platforms (remember that they may sink if you stay on them for too long). 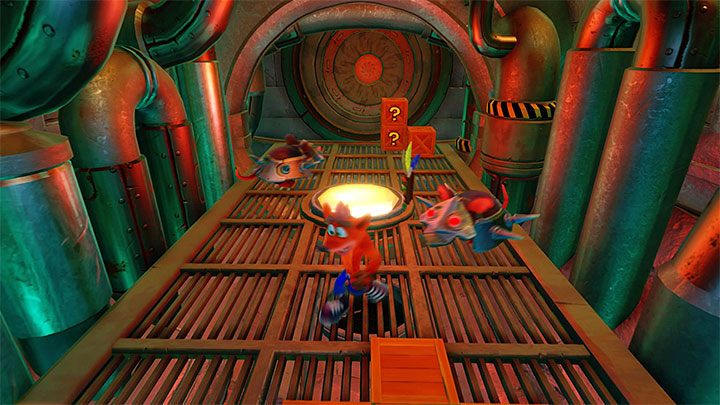 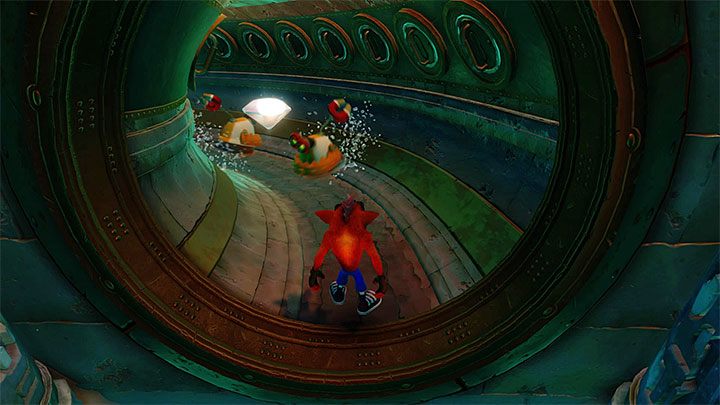 In the next location, use one more platform and reach the first checkpoint. If, in the previous level, you have obtained the yellow gem, you can now stand on the platform shown in screenshot 1 and access the secret location. Here, jump into the area with discharges. You have to be very accurate while jumping off the metal crates with arrows, thanks to which you will reach two floating platforms.

In the next corridor, there is the Clear gem shown in screenshot 2. After you have obtained it, try to RETURN to the starting point. Do not follow the path, because you will then miss some of the crates further in the main part of the sewer. Note - if you die along your path to the starting point, do not attempt traveling to the secret location, because you do not lose the clear gem. 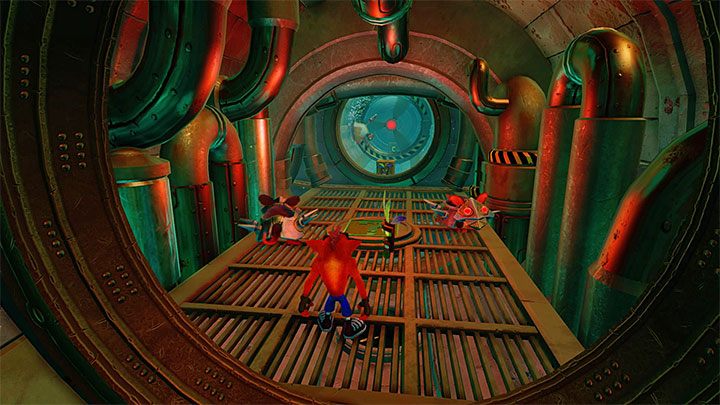 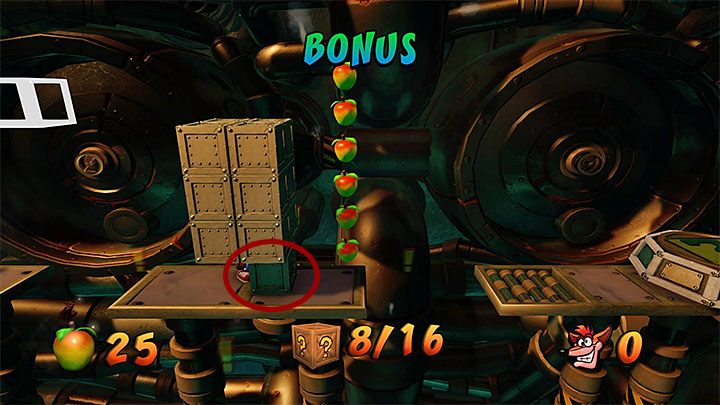 After you have returned to the main part of the sewer, move on and smash wooden crates as you go. Carefully, get around the working fan (you cannot damage it) and approach the enemy with flame thrower. Just like earlier, move only after he stops firing the weapon.

In the next corridor, get around the barrels and the robots. Soon, you will reach the plate with the question mark shown in screenshot 1 (there are armored rats around it). Stand onto the plate to access the bonus round. Here, there are 16 crates to smash. Reach the crate with the exclamation mark and, after you hit it, approach the wooden crates on the green ones with nitroglycerine. Jump from crate to crate and make sure that each time you ling precisely on the spot. After you get past this point, reach the crate with the exclamation mark shown in screenshot 2. Hit it to unlock some additional crates on the left. Jump off the crate with the arrow and smash the last crate above with extra life.

Note - do not worry if you do not manage to smash all of the regular crates on the green ones with nitroglycerine. Later into the stage, you will be able to blow them all the green crates up and this will smash the regular ones on them. 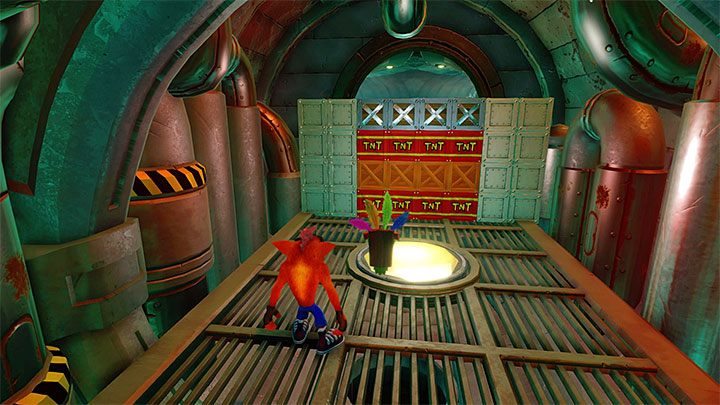 After you have completed the bonus round, follow the sewers. Approach the working fan and hit the robot to damage one of the blades. You do not have to take the risk and cross the fan. Instead, you can wait for more robots to come by and these can also be thrown towards the fan. Regardless of what you did, reach the checkpoint.

In the next location, jump on the floating platforms and avoid water, or you will be electrocuted. Enter the tunnel and attack the robots with Spin attack, thanks to which you damage all of the fan blades.

You will reach the wall of crates shown in the above screenshot. It should be noted that it is here that you would have respawned, if you had decided to follow the path to the very end, after using the yellow gem. Take a short jump here and carefully, smash one of the regular crates. Get away from the wall, then, and wait for the explosions. 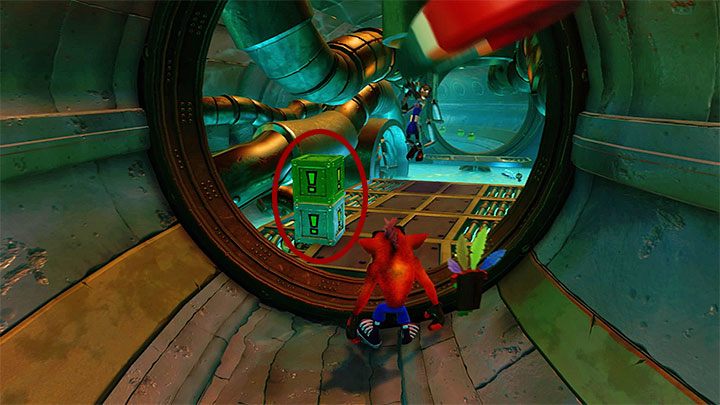 Right past the wall, there is a fork. Follow the right path first. Reach the two crates with exclamation marks shown in the above screenshot and hit them. After that, return to the fork and take the left path. Deal with the opponent with flame thrower and the robots. Use the floating platform to reach the balcony with several wooden crates on it, and the violet crystal.

Again, return to the fork and take the right path once more. Eliminate the opponent with flame thrower and jump over the small water reservoir. In the next location, wait for the opponent to stop firing and take a series of jumps (you cannot wait on the floating platform or it will sink). Fortunately, this is nearly the end of this level, because the nearby corridor leads up to the portal.