Note - to obtain both of the gems, it is best to play this stage twice, first to obtain the clear gem for smashing all of the crates, and then to obtain the yellow gem for making it within the time limit.

This is yet another level that takes place on the river, yet there are more traps here, than in the earlier stages. An additional handicap is the fact that you will have to complete its larger portion within certain time, if you want to obtain the yellow gem and, for obvious reasons, you will have to avoid making even the minutest mistakes. 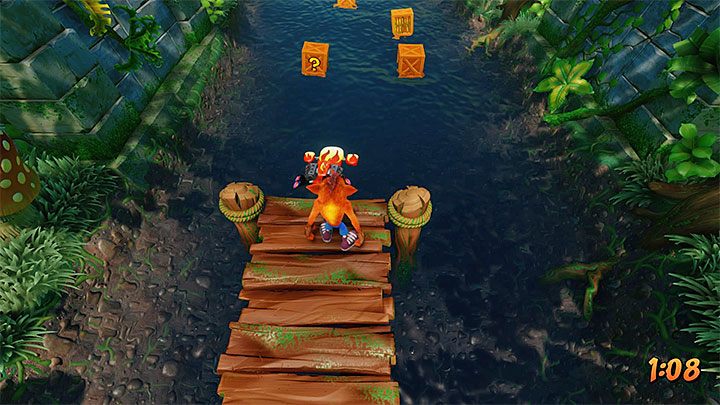 Jump onto the first floating platform, take another jump and eliminate the carnivorous plant. On the top, keep jumping between the floating posts and then, take several jumps to land onto hippos. Soon, you will reach the first checkpoint.

Note - After you have reached the checkpoint in the bottom part of the screen, a countdown will start (the above screenshot). It is connected with the opportunity to obtain the yellow gem for completing the stage within time limit. It is best to do that while replaying this level. It is not too difficult to obtain the gem, but you will have to use boost during each jetboard ride. The last ride is the most difficult, because you cannot lose any time on eliminating the plants, before jumping onto the board. Therefore, use boost to avoid being caught by them. In the section with TNT crates, jump off the crates to make it faster through the parts with carnivorous plants. Also, remember about avoiding nitroglycerine crates, especially that they will be hopping occasionally. If you do not stop anywhere for longer, you should reach the end of the stage with 5-8 seconds left. 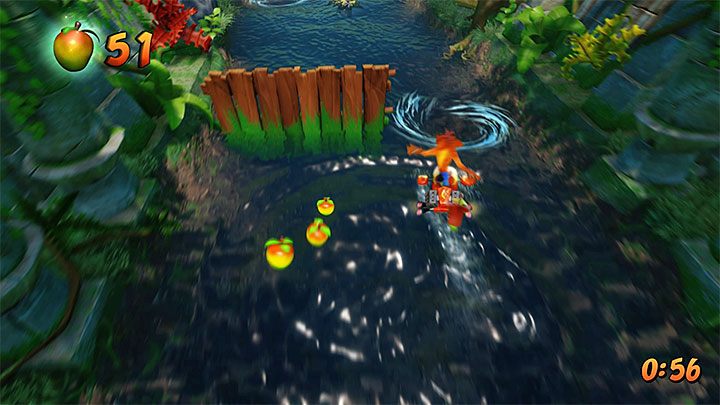 During the first jetboard ride, focus on avoiding, mines and whirlwinds. The most difficult is the whirlwind shown in the above screenshot. Here, you have to steer as close to the palisade on the left as possible and, additionally, activate boost at the right moment. Later on, also avoid nitroglycerine crates, but this will be easy.

Activate the next checkpoint and move on. Around, there are two TNT crates and it is best to jump off each one of them, because you will land onto the nearby carnivorous plants and deal with them easily. 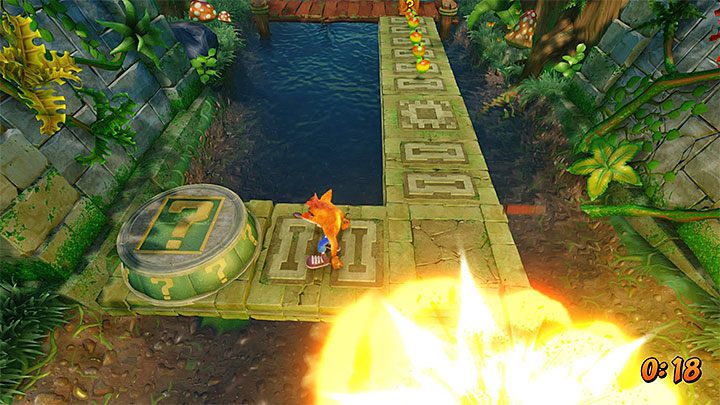 Stop in the current location for a moment. On the left, there is a pressure plate with the question mark, which will take you to the bonus round (the above screenshot). In the bonus round, there are a dozen crates to smash. Some of them are TNT crates, but it is easy to get away from them after the countdown starts. It is a bit more difficult to jump onto the ledge with the last crate. You can either distance it properly, or slide right before you jump.

Reach the second jetboard and steer up the river. During the ride, you have to watch out for the carnivorous plants for the first time. They will appear on the small square platform by the water. Do not approach them, because you can be devoured even if you are using the board. Keep your distanceand try to use boost whenever necessary. 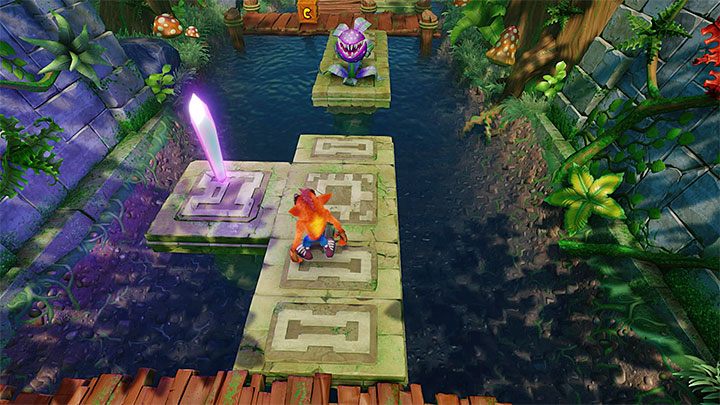 After you go out into the mainland, reach the violet crystal (the above screenshot) and the checkpoint. Take your time before you jump onto the next jetboard and explore the area on the right. Eliminate all of the carnivorous plants around (including the one on the left ledge with crates), thanks to which you will not have to worry about them later on.

You can now return to the jetboard and continue up the stream. Aloing your way, use the ramp and watch out for the plant at the very end. You can avoid it using boost. There only are two rows of green crates left to avoid. Take your time here, because some of them are hopping. Finally, hit the crate with the exclamation mark to blow up all the crates you have left out. You can now end this stage.